Jermell Charlo and his twin brother, Jermall, made history becoming Super Welterweight World Champions at the same time. After regaining his WBC belt, the Houston native is on a mission to prove he's the top 154-pound fighter in the world. Read Bio 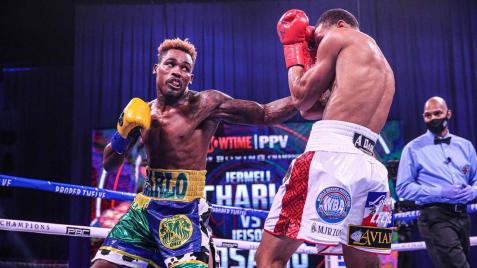 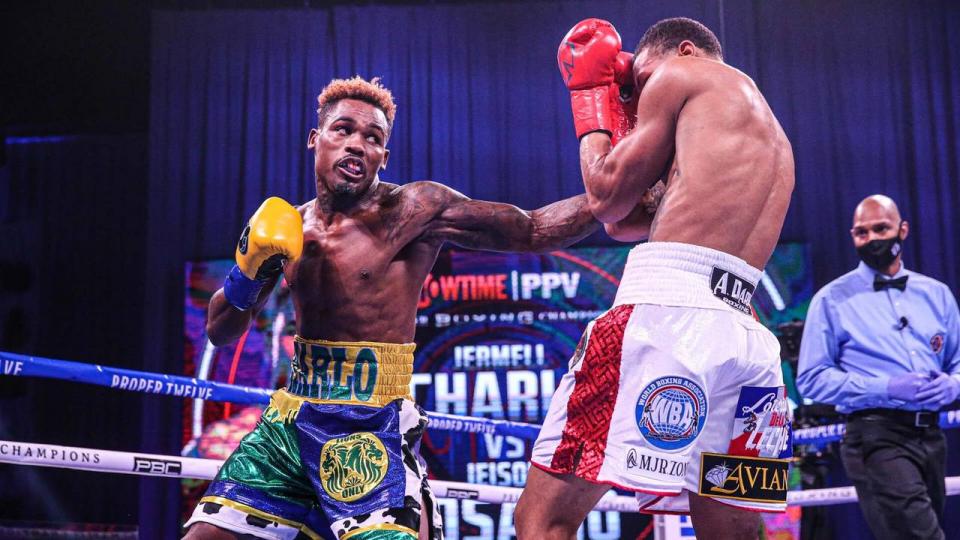 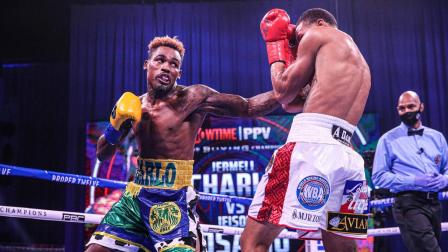 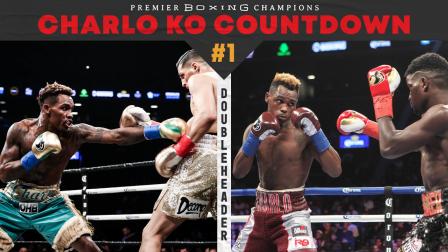 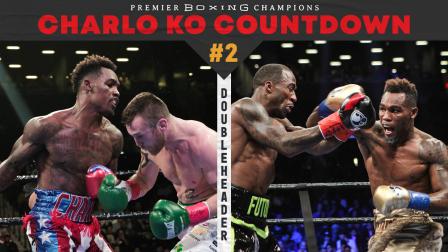 The Charlo Twins Are the Talk of the Town

This Week on The PBC Podcast: Jermell Charlo & The Great Eight

The WBC World Super Welterweight Champion drops by to discuss a unification bout versus Jeison Rosario, why he still wants Jarrett Hurd, and much more.

Jermell Charlo has been fighting alongside his twin brother, Jermall, his whole life, sharing the mantra of “Lions Only” as the siblings made history as 154-pound world champions — becoming the first brothers to reign concurrently in the same division at the same time. Now Charlo stands alone in the division, looking to become the greatest super welterweight ever.

Keeping it all in the family

Jermell, who is younger-by-a-minute than Jermall, goes by the nickname “The Iron Man,” and Jermall dons the moniker of “The Hit Man.” The twins—who were born in Lafayette, Louisiana, and raised in Houston—were 8 years old when their father, Kevin, a former amateur boxer, first took them to the gym as a way to offer them a positive, disciplined environment.

Both siblings competed in football and basketball in high school, but they kept gravitating toward boxing. Jermell didn’t take long to make an impact as an amateur, winning a bronze medal at the 2005 junior Olympics at the age of 15 after only two years of involvement.

After posting a record of 56-8, Charlo turned to the professional ranks as a 17-year-old in the winter of 2007 while Jermall continued on as an amateur with hopes of competing in the 2008 Olympics.

Standing a nearly identical 6-feet tall, Jermall is married with four sons while Jermell is a single father with a son and also owns “The Charlo Brothers Boxing and Fitness Club in Sugar Land, Texas.

Charlo’s career began with a four-round unanimous decision over previously unbeaten Corey Sommerville, whom he floored in the third round on December 8, 2007.

Elijah Charlo was born on August 22, 2009, within hours of his father’s unanimous decision victory over Vito Gasparyan, which improved him to 9-0 (4 KOs).

“My son was born during the weigh-ins, so I had to make weight, and then go and be with my son after the weigh-ins,” said Charlo. “My father cut the umbilical cord for my son, because I wasn’t actually there. So he was born, then, I went and won the fight. That was a situation where there could have been a lot of adversity.”

Abdon Alonzo was unbeaten in six fights when Charlo stopped him in two rounds on December 12, 2009, rising to 10-0 with five knockouts. Luis Grajeda was 10-0-1 with seven knockouts, four of them in the first round, when Charlo scored a unanimous decision over him on November 12, 2010.

Francisco Santana was 12-2-1 with five knockouts on October 7, 2011 when he was all but shut out over eight rounds by Charlo. Santana had previously lost a pair of decisions to then-unbeaten Karim Mayfield and battled to a draw with undefeated Julian Williams. Charlo then registered third- and fifth-round stoppages of Chris Chatman (10-1-1, five KOs) and Denis Douglin (14-1, 8 KOs), who were knocked out for the first and second times in their careers on March 24, 2012 and June 23, 2012.

“Yorgey was a major move in my career. He was 25-1,” said Charlo. “Then you have Demetrius Hopkins. I had to have surgery before that fight because the commission said that my vision was so bad that I was legally blind.”

A unanimous decision over two-time title challenger Gabriel Rosado on January 25, 2014 represented another huge step for Charlo. Next came a UD win on May 24, 2014 over previously once-beaten Charlie Ota, followed by another decision on December 13, 2014 over Mario Alberto Lozano, the latter stepping in after undefeated WBO 154-pound titleholder Demetrius Andrade had pulled out due to monetary issues.

“I was knocked down by Ota in the beginning stages,” said Charlo. “That was the first time that I got knocked down in my career.”

Charlo won his next fight on March 28, 2015 by unanimous decision over title challenger Vanes Martirosyan, who had battled to a draw with titleholder Erislandy Lara. Martirosyan’s only other loss was by decision to Andrade, whom he dropped in the first round.

That set up a history-making eighth-round stoppage of John Jackson for the WBC’s vacant 154-pound title on May 21, 2016 at the Cosmopolitan of Las Vegas. On the same card, Jermall followed his brother’s victory with a unanimous decision win over former titleholder Austin Trout and the siblings became the first twins to reign concurrently in the same division at the same time.

“We did it,” Jermell said. “We made history. We’ve been boxing for all these years, and it had to happen.”

Jermall added: “It was great being the first twins to win titles in the same division, and I’m so proud of my brother. I knew he could get the job done.”

The first- and second title defenses were sixth and first-round stoppages of Charles Hatley and Erickson Lubin on April 22, 2017 and October 14, 2017—representing Charlo’s third and fourth knockouts in the past four years vs southpaws. Charlo made his third defense on June 9, 2018 when he defeated Austin Trout, a left-handed former 154-pound champion, by majority decision—which included a pair of knockdowns.

“I went to fish, I tried to get some trout but I couldn’t catch him on the hook,” Charlo said. “I know they’re used to seeing me knock boys out but at least they saw me take care of business.

Trout, who also lost a unanimous decision to Jermall in May 2016, said the Charlo twins are taking over the sport.

“Both Jermall and Jermell are really good. They are the future.”

On December 22, 2018, Charlo took on dangerous former world title challenger Tony Harrison at Barclays Center in Brooklyn, New York. Charlo stalked while Harrison boxed on the outside. The bout ended up going the full 12 rounds. All three judges scored the bout in favor of Harrison by scores of 116-112 and two 115-113 cards.

The decision was met with a Bronx cheer from the Big Apple crowd who thought the champion should have retained his title.

“They took that fight from me,” said Charlo, who threw and landed more according to punch stats. “I was pressing the action. He didn’t win that fight. I’m going to get my belts back. I still want Jarrett Hurd. I know my brother knows I won that fight. I might have given away a few rounds, but I won that fight.”

The rematch was set for June 23, 2019. However, when Harrison was forced to pull out due to an ankle injury suffered in camp, veteran slugger Jorge Cota stepped in. Bouncing back from the first loss of his career, Charlo turned in one of the most explosive performances of the career, flattening Cota with a right hand in the third round.

Saturday, December 21, 2019, was a day of redemption for Jermell Charlo. That was when he took on Tony Harrison in a highly anticipated rematch. Charlo promised a KO. He delivered, dropping Harrison once in the second with a left hook and again in the 11th with that same punch. Harrison would go down twice more during the stanza, the last of which forced referee Jack Reiss to mercifully end the bout at 2:28 of the eleventh.

“I got that belt. It took me a while, and got in the 11th and I didn’t leave it up to the judges,” a jubilant Charlo said afterward. “Tony is a former champion, and he came to fight. He had a lot on the line. He had pressure on him. I did what I had to do.

“I dictated, I dominated and I knocked him out.”

Charlo's unbelievable run at 154-pounds continued on September 26, 2020, as he took on WBA/IBF World 154-pound Champion Jeison Rosario in an epic unification on SHOWTIME pay-per-view. Rosario was coming off a stunning TKO win over the highly-regarded Julian Williams in January. The winner would leave with three world titles.

What was expected to be a war turned into another sterling performance by Charlo. He was incredibly impressive, dropping Rosario three times, once in the first, the sixth and the eighth, the final one a  downward left jab to the body that sent Rosario writhing in pain on the canvas and ended the fight at 0:21 of that round.

“I knew (Rosario) would keep coming, and he did, he pressed on for four or five extra rounds, before I was able to floor him again,” said Charlo, who unified the WBA, WBC and IBF belts. “I’m growing and I realize the knockout just come. I definitely proved I’m more than just a puncher, but I proved that I am a puncher.

In the first round, Charlo came out throwing wide punches. One shot, according to referee Harvey Dock, clipped Rosario. Dock ruled Rosario was knocked down with a left hook in the first half of the round. A glancing Charlo left did bounce off the top of Rosario’s head, though a replay showed Rosario’s right foot falling outside of the ring, causing the knockdown.

Rosario nailed Charlo with a couple of left hooks in the second. Charlo seemed content on boxing in the third, staying at a safe distance, pecking away from the outside. With 0:57 left in the third, Dock warned Rosario to keep his punches up, as Charlo looked irked by a left hook on the hip.

Charlo resorted back to the jab again in the fourth. Rosario dug to the body with the left hook. “Banana” also began using his jab more consistently, backing up Charlo.

At 1:41 left in the sixth, Dock stopped the action for another low-blow warning to Rosario. Moments later, Charlo responded, nailing Rosario with a flush left hook to the face that was a legitimate knockdown.

Rosario returned to his corner in a wobbly, unstable state.

Charlo showed patience in the seventh. Knowing he was in control, the poised Charlo poked long jab to Rosario’s solar plexus, and the former WBA/IBF champ fell backwards, struggling to rise and wearing a look of agony as Dock reached 10.

“I never saw anything like that before,” Charlo said.