Super Welterweight sensation Sebastian "The Towering Inferno" Fundora stands up to his tall nickname as he measures 6-feet, 6.5-inches tall on a 154-pound frame. Read Bio 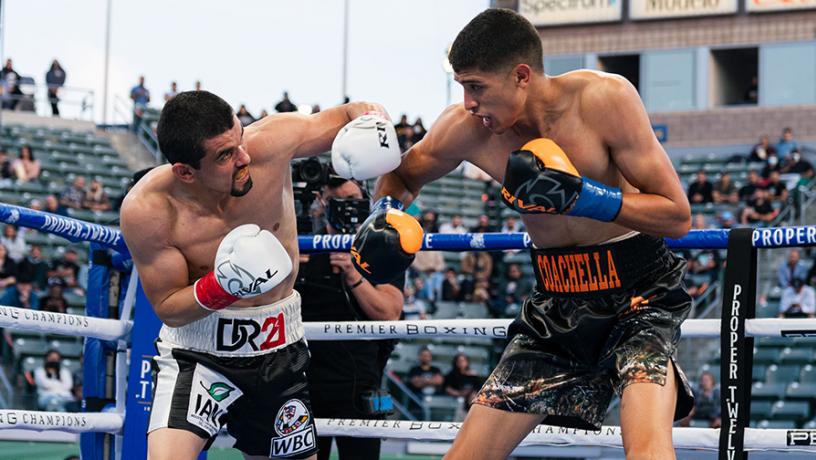 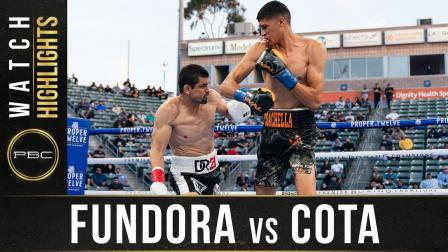 Fundora vs Cota - Watch Fight Highlights | May 1, 2021 click here to get video transcript 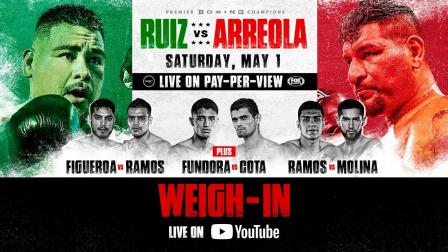 Ruiz vs Arreola Weigh in click here to get video transcript 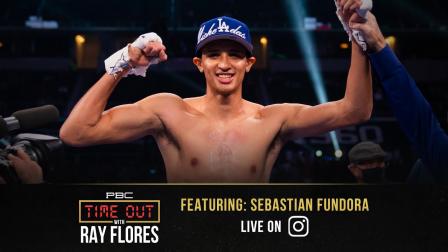 For Sebastian Fundora, Fighting is a Family Affair

The undefeated rising super welterweight star draws strength from his family as he prepares to face veteran Jorge Cota Saturday, May 1 on the Andy Ruiz-Chris Arreola FOX Sports PPV card.

Super Welterweight sensation Sebastian "The Towering Inferno" Fundora stands up to his tall nickname as he measures 6-feet, 6.5-inches tall on a 154-pound frame. No matter his skyscraper stature, the Florida native continues his climb upwards toward contender status.

Standing a lanky 6-foot-5 ½, Sebastian Fundora is often mistaken for a basketball player, which he insists he's “definitely not.”

“When I was about 14 or 15, I practiced basketball for about a month, but I couldn’t dribble the ball even a little bit,” said Fundora, 22. “I never even asked for my parents to sign the waiver because I was so terrible that I don’t even know why I tried and I’ve never done it again.”

It’s a good thing that by that time, Fundora’s Cuban-born father and trainer, Freddy Sr., a former boxer, had already passed on his love of the sport to his six children.

Fundora is the second-born. He, along with four siblings, excelled in pugilism, including older brother Alberto, Freddy Jr. and their amateur star sister, Gabriela, a highly-ranked 119-pounder.

Fundora first entered a boxing gym as an eight-year-old in his native West Palm Beach, Florida. The family moved to California when he was nine. Fundora trains daily at the Coachella Valley Boxing Club, about 130 miles from Los Angeles.

“My father was a boxer, my mother [Monique] boxed. I started boxing at my Dad’s gym, which was a converted office building, and loved boxing from the moment I tried,” said Fundora. “Everybody in my family has boxed, and I believe that my sister is going to turn professional pretty soon. I had over 100 amateur fights, but I really never won anything significant.”

Currently, Fundora competes at 154-pounds. Nicknamed “The Towering Inferno” by promoter Sampson Lewkowicz, lived up to that name against Victory Toney in September 2017.  The 5-foot-10 Toney was 5-0 with four knockouts before tasting defeat and represented Fundora’s initial six-rounder of three for his career.

“The Toney fight was my fifth and a huge stepping-stone,” said Fundora. “That was a big test, and I passed it.”

Fundora’s hat trick of knockouts in 2018 were made up of those in the fifth, fourth and first rounds against previously undefeated VeShawn Owens (April), Antonio Urista (August) and Jeremiah Wiggins, the latter in 31 seconds in November.

The 5-foot-10 Owens had stopped all of his nine opponents before being battered and rescued by the official after absorbing a barrage of punches resulting in a fifth-round TKO. Urista entered at 10-2 with two knockouts but was stopped for the first time also as the referee halted their bout.

“Owens was a big step up on the ladder and my hardest fight to that point, but we trained hard and had a great camp,” said Fundora. “I finished him off with some right hands and some straight lefts, and it ended earlier than we thought.”

Fundora went 2-0-1 with a pair of knockouts in 2019 on third- and fourth-round stoppages of previously unbeaten fighters Donnie Marshall (February) and Hector Manuel Zepada (June). That August, he fought to a 10-round draw versus 6-foot-2 southpaw Jamontay Clark, who entered the bout at 15-1 with seven knockouts.

“I thought I did enough to beat Jamontay Clark and I think I won that fight because I was more active,” said Fundora of a clash whose scores were 98-92 in his favor, 96-94 for Clark and even at 95-95.

On February 22, 2020, Fundora dominated 2016 Australian Olympian Daniel Lewis, winning a 10-round unanimous decision in a bout featured on the undercard of the Deontay Wilder-Tyson Fury rematch at MGM Grand in Las Vegas, Nevada.

Lewis was 6-0 (4 KOs) coming in. He represented the seventh undefeated fighter faced by Fundora.

“Lewis was definitely a big win because he’s a former Olympian, but I wasn’t nervous. I was actually excited to be on such a big card in front of such a big crowd. I grew up a little bit more in that fight," said Fundora.

"I’d like to capture a title at 154, but that depends on where my body is in a year or two. I’ve served notice that I’m a force to be reckoned with and an action-packed fighter. We’re not here playing games but we’re here to please the fans and to become a champion.”

On Saturday, August 22, 2020, Fundora took on what was expected to be the toughest test of his career in veteran slugger Nathaniel Gallimore.

Fundora delivered his finest performance to date, beating Gallimore down until referee Ray Corona stepped in at 1:28 of the sixth round.

With the win, Fundora (15-0-1, 10 KOs) graduates from prospect to contender at super welterweight—a formidable one at that. There isn’t a more appropriate nickname in boxing than his moniker, The Towering Inferno. At 6-foot-6, he’s taller than most heavyweights. Yet, as lanky as he is, he’s as tough and strong as they come, often bullying his foes on the inside.

That’s what he did to Gallimore (21-5-1, 17 KOs), who came into this fight brimming with confidence. The hard-hitting Chicago, Illinois resident had been in the ring with four of the best 154-pounders in the world and held a sizable advantage in pro experience over Fundora.

That confidence evaporated after the first couple rounds. Gallimore did have his moments in second, particularly toward the end of the frame, when he buzzed Fundora with a left hook.

It was all downhill from there.

Fundora pounded away, boring in and unloading with power shots from all angles to Gallimore’s head and body. The nonstop assault sapped Gallimore’s energy. He was a battered, spent force by the sixth, when the fight was stopped.

“I give my performance a 10 out of 10,” said Fundora. “I did what I had to do tonight. We’re always working on our distance and controlling that part of the fight, because I know I’m going to need it throughout my career. Whatever my team thinks is best for me next, I’ll be ready for it.”

Another Major Step Up

Fundora returned on May 1, 2021, on the undercard of the Ruiz-Arreola FOX Sports PBC pay-per-view at Dignity Health Sports Park in Carson, California. In a thrilling battle, Fundora won a close-quarters war via fourth-round stoppage over Jorge “El Demonio” Cota (30-5, 27 KOs) in their WBC Super Welterweight Title Eliminator.

"I'm extremely grateful to fight in front of the fans tonight,” said Fundora. “It was fun to hear the cheers, the boos and everything. I'm honored to be in this position.”

Fundora and Cota stood toe-to-toe from the opening bell, throwing big punches and marking up each other early. Fundora landed 29 and 28 power punches in the first two rounds, with Cota connecting on 15 and 17.

The fight was fought at close range for 90% of the action, with each fighter showing off impressive in-fighting skills. Fundora was able to up his work rate significantly in the third and fourth rounds, landing 42 punches in each, every single one a power shot.

The fourth round saw Fundora break through with a big shot that appeared to finally daze Cota. Fundora pushed forward aggressively to look to send Cota down, while Cota was still able to wing his own power shots despite his impaired state.

A final powerful left hook that Fundora landed finally prompted referee Ray Corona to stop the bout at 2:35 of the fourth round. Cota disagreed with the stoppage, while Fundora set his sights on future big fights in the 154-pound division.

"My message to the rest of the division is that we're here,” said Fundora. “If you’re ready for war, we're ready to take it. Bring it on."