Jermell Charlo capped a powerful performance with a sixth-round KO of Charles Hatley to retain his 154-pound world title.

Charlo dropped Hatley in the third round before finishing him off in the sixth to retain his world championship at Barclays Center.

The knockout was sensational as Charlo punctuated a barrage of blows with a head-swiveling right hand that landed as Hatley missed with a left. The challenger fell face-first to the canvas and was out cold beneath the bottom rope on the ring apron as referee Harvey Dock immediately waved an end to the fight 32 seconds into Round 6.

Charlo, 26, showed more power than he had in previous fights as he put the rest of the 154-pound division on notice, and looked forward to a possible title unification against recently crowned champion Jarrett Hurd, who earned the title that Charlo’s twin brother, Jermall, vacated earlier this year to move up to 160.

Jermell Charlo defended his title for the first time since earning the vacant championship last May with an eighth-round KO over John Jackson in Las Vegas. He made history that night by joining Jermall as the first siblings to simultaneously hold 154-pound world titles.

Hatley lost for the first time since being stopped by Lanardo Tyner in the first round in August 2012.

The 31-year-old Dallas native had some success early against Charlo, but the champion staggered him against the ropes at the end of Round 2. Charlo totally seized control in Round 3, when Hatley was floored for the seventh time in his career with a right to the temple.

After Hatley was warned for an intentional headbutt in the fourth, Charlo stunned him with a stiff jab and later with a right just before the end of the round. 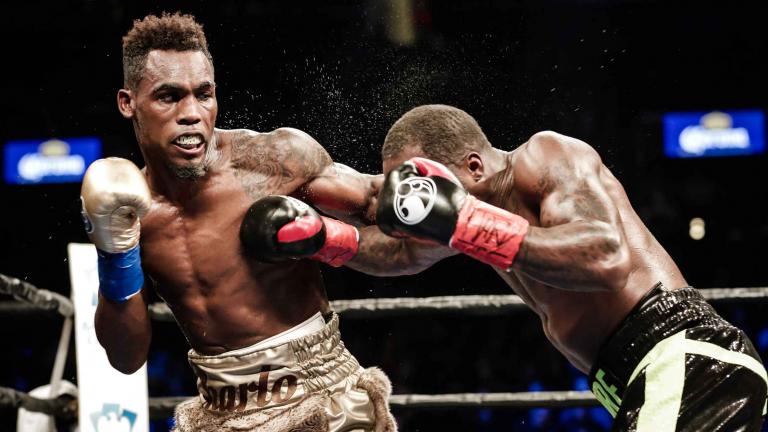 Jermell Charlo is an overwhelming favorite to defend his 154-pound world title for the first time against Charles Hatley, but the champ isn’t necessarily a betting man.