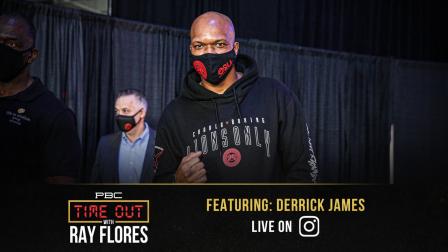 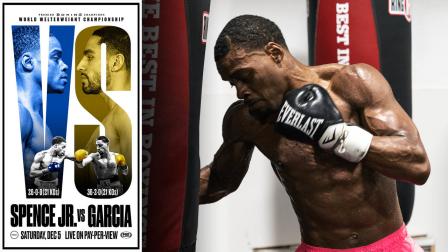 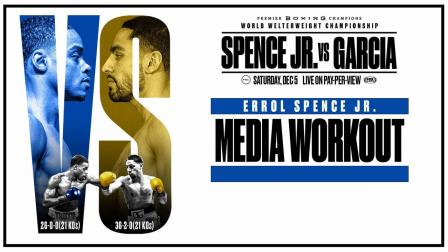 The reigning welterweight king speaks to Ray Flores about what he’s been up to, what he’s learned and who he’s targeting once boxing resumes.

Errol Spence Jr. WINS against Shawn Porter by SD in Round 12 of 12

Errol Spence Jr. WINS against Mikey Garcia by UD in Round 12 of 12

Errol Spence Jr. WINS against Oscar Ocampo by KO in Round 1 of 12

Errol Spence Jr. WINS against Lamont Peterson by TKO in Round 7 of 12

Kell Brook LOSES to Errol Spence Jr. by KO in Round 11 of 12

Errol Spence Jr. WINS against Leonard Bundu by KO in Round 6 of 12

Errol Spence Jr. has announced himself as one of boxing's top stars, making quick work of most of his opponents in his rise to becoming a 147-pound world champion. A U.S. Olympian in 2012, the unbeaten southpaw began boxing at age 15 under his father’s guidance.

Spence may not have a ton of ring experience yet, but you can’t entirely blame him—that’s just what happens when you stop most of your opponents in the early rounds.

That’s been a good problem for Spence so far in his professional career, as the Desoto, Texas, resident has only had to go the distance three times in maintaining a perfect record.

The southpaw packs a lot of power, and has shown a real knack for inflicting early damage and then pouncing, putting his opponents away before some fans have even taken their seats.

Spence has been using that blueprint since his amateur days.

He won the 147-pound title at the 2012 U.S. Olympic trials before losing in the quarterfinals at the London Games.

Developing as a professional

Spence showed his knockout ability in his professional debut in November 2012, finishing off Jonathan Garcia in the third round.

He then KO’d six of his next seven opponents, five of them in the first round.

That’s not to say that Spence can’t last, however. Ronald Cruz went the distance with Spence in Las Vegas in June 2014, but the former Olympian didn’t lose a round and won the 10-round bout by unanimous decision.

“These are the kind of fights I need more of,” Spence told the Las Vegas Review-Journal afterward. “If I’m going to get better, I need to have tough fights like this.”

Taking the next step

Spence followed up his win over Cruz by stopping Noe Bolanos in the second round of their fight in Las Vegas in September 2014, beginning his run of 11-straight knockouts that encompass dethroning England’s Kell Brook for the IBF’s 147-pound title in May 2017. A fifth-round TKO of Javier Castro that December completed Spence’s 5-0 mark in 2014.

Continuing to rise through the ranks

Spence had a busy 2015, going 4-0 by stopping Samuel Vargas, Phil LoGreco, Chris van Heerden and Alejandro Berrera all for the first time in their careers. Their combined records were 97-5-1, with LoGreco having lost a 10-rounder to former champion Shawn Porter in 2013.

That dominance continued in 2016, when Spence scored three knockdowns during a fifth-round TKO of former 140-pound champion Chris Algieri in April and a pair of final-round knockdowns during a sixth-round KO of Leonard Bundu in August—which drew big TV ratings.

The telecast, which immediately followed the U.S. men’s basketball team’s gold medal-winning victory over Serbia on the final day of the Rio Olympics, averaged 4.8 million viewers, with a peak of more than 6.3 million. That makes it the biggest television audience for boxing in 18 years.

Algieri had suffered 12-round unanimous decision losses to former champions Manny Pacquiao (2014) and Amir Khan (2015), and Bundu the same against undefeated current titleholder Keith Thurman (2014), rising from a first-round knockdown.

Spence traveled to Sheffield, England, in May 2017, where he dethroned Brook before 27,000 Brits. Spence scored 10th-and final-round knockdowns of Brook, who suffered a broken orbital bone in his severely swollen left eye.

In Brook, Spence defeated a man who dethroned Porter and became the first American to earn a title from an English champion on foreign soil since 2008 when Tim Bradley upset Junior Witter in Nottingham for a 140-pound title.

Spence’s has made two defenses—a one knockdown, seventh-round stoppage of two-division champion Lamont Peterson in January, and a first-round KO of previously unbeaten Carlos Ocampo in June at The Ford Center at The Star in Frisco, Texas, the Dallas Cowboys’ training center near his hometown of DeSoto.

Peterson had rebounded from a 143-pound majority decision loss to two-division champion Danny Garcia in 2015 with a majority decision win over Felix Diaz in October 2015 and a unanimous decision victory over David Avaneysyan in February 2017.

“It’s a factor when guys go the distance with other fighters and I knock them out. I always want to outperform my foes,” said Spence, adding that he wants “to rule with an iron fist” and “be pound-for-pound No. 1.”

“There’s a lot of people salivating for me to be No. 1, and I should be by next year. A unification fight with the winner between Danny Garcia and Shawn Porter is probably going to happen during the first quarter of next year. Hopefully I’ll be mentioned as an all-time great like Sugar Ray Leonard and Floyd Mayweather, and Tommy Hearns and Oscar De La Hoya.”

THE BIG TIME IN BIG D

On Saturday, March 16, 2019, Spence looked to add to his already-impressive credentials by facing unbeaten four-division world champion Mikey Garcia in the main event of the first-ever FOX Pay-Per-View fight, which took place at AT&T Stadium in Arlington, Texas—the home of the Dallas, Cowboys, a team that Spence idolized growing up.

"This is a dream come true. This is something that still hasn't really hit me yet. I try not to get caught up in the moment, but this is my favorite team that I've watched since I was sitting on my dad's lap," Spence said. "Any athlete would love to have their home team supporting them. It just so happens I have the most popular team in the world right here in Dallas. I'm very humbled and it feels great to represent Dallas."

Spence represented in a major way. The outcome of this one was never in doubt. Spence dominated the fight, shutting Garcia out to earn a unanimous decision in front of nearly 50,000 fans. Against a fellow top pound-for-pound fighter, Spence showed his potential to be at the very top of the sport.

While Garcia showed his mettle in making it the distance, Spence was simply too effective, with one judge even scoring round 11 10-8 for Spence. Spence threw a career-high 1082 punches and out landed Garcia by a staggering 345 to 75 margin.

"The motivation fighting in front of my hometown crowd made me feel great," said Spence. "These people have supported me since day one and I wanted to put on a good performance for all of them."

Spence vs. Porter: A Battle for the Ages

Spence was on a mission to prove he was the king of the stacked welterweight division. To that end, on September 28, 2019, he took on WBC World Welterweight Champion "Showtime" Shawn Porter in an highly-anticipated unification match at Staples Center in Los Angeles, live on FOX Sports pay-per-view.

The fight proved greater than the hype. The two champions engaged in a spellbinding war from the opening bell; the see-saw action never stopped. And when it was all over, the 16,702 in attendance at Staples Center in Los Angeles were as exhilarated as the combatants.

Though there were no losers in this headlining event on PBC on FOX Sports PPV, there could only be one winner. Spence Jr. remained undefeated, adding the WBC World Welterweight title to his IBF strap by 12-round split decision.

Further, Spence showed that underneath his calm Southern demeanor, behind the traditional high guard and sublime southpaw skills, the Desoto, Texas native is all heart.

Porter never folded, even in the eleventh, when Spence’s picture-perfect counter left hand caused his eyes to roll in the back of his head and his gloves to touch the canvas. And in the end, the Akron, Ohio native earned the respect of an arena that was largely pro-Spence at the fight’s outset.

After a feel-out opener, both fighters went to work: Porter stepping inside Spence’s jab to unload combinations, Spence countering to the body. Back and forth it went, with the busier Porter winning the early frames with his awkward, mauling style and the elite athleticism that allowed him to instantly switch angles.

Spence found his rhythm in the fifth, using his jab to keep Porter at bay and countering whenever his shorter foe got past it. Spence continued to outbox him in the sixth but the action picked up again in the seventh as Porter found his second wind. Much of the frame was spent in close quarters, each fighter pounding away at the other’s ribcage.

The action kept getting better. In the eighth, a jab followed by a straight left to the solar plexus hurt Porter, who was forced to get on his bicycle…and then walked Spence into his own left, a hook upstairs, that momentarily buzzed him. Both stood their ground for the rest of the stanza, trading bombs like two nations without inhabitants.

Everyone stood and cheered as the round came to the close—and they were back on their feet during the ninth. The bout appeared up for grabs headed into the tenth. At the start of that round, Spence shimmied to the music playing on the loudspeaker. The crowd roared their approval, then cheered some more as the fighters exchanged body punches.

Then in the eleventh, Spence broke through. Using his jab to lure his opponent in, a beautiful counter left cross wobbled Porter and caused his gloves to touch the canvas. Porter gamely rose to his feet and then motioned for Spence to bring it on. He obliged, unloading his best even as Porter fought back with power punches.

Spence sought to close the show in the twelfth but it wasn’t meant to be. Porter never stopped returning fire. It was enough to earn him a 115-112 score on the card of Larry Hazzard Jr. Ray Danseco had it 116-111 and Steve Weisfeld 116-111, both for Spence, the new unified world welterweight champion.

“Shawn Porter is a rough and awkward fighter,” Spence admitted. “I didn’t get off what I wanted to. He’s a true champion. He made it tough.

“It feels good to win. This is a lifetime dream. It shows hard work pays off. Thanks Shawn Porter, my whole team and all my Texas people for coming out.”

Along with those Texas people, former two-division world champion Danny Garcia also came out—and confronted Spence in the ring, calling for a bout in 2020.

“My how the tables have turned,” Spence responded. “I’ve told my team, you line them up, I’ll knock them down.”

Whether that occurs or not, remains to be seen. But for now, one man stands atop the welterweight division, proving that he is indeed, “The Truth.”