Jermell Charlo erases all doubt and becomes the Undisputed Super Welterweight King after stopping Brian Castano in the 10th round of an extraordinary back-and-forth battle.

Jermell Charlo erases all doubt and becomes the Undisputed Super Welterweight King after stopping Brian Castano in the 10th round of an extraordinary back-and-forth battle.

In a history-making performance, Jermell Charlo again showed he’s the master of the rematch. Unified WBC, WBA and IBF World Champion Jermell Charlo picked up the WBO title with a dramatic tenth-round KO of Brian Castaño in a rematch of their 2021 masterpiece to become the first ever undisputed male 154-pound champion in the four-belt era on Saturday, May 14 live on SHOWTIME from Dignity Health Sports Park in Carson. The bout, which was another Fight of the Year-type encounter, headlined a Premier Boxing Champions event before an announced crowd of 7,406.

The end came when Charlo (35-1-1, 18 KOs) dropped Castaño with a short, left hook as he was fighting off the ropes with around a minute left in the tenth. Castaño (17-1-2, 12 KOs) rose on unsteady legs and was allowed to continue and Charlo jumped on him, landing a vicious left to the head and body that caused Castaño to collapse and referee Jerry Cantu to wave off the bout at 2:33 of the tenth.

Saturday’s ending was reminiscent of the way Charlo closed his fight with Tony Harrison in their 2019 rematch when he KO’d Harrison in the 11th round after Harrison dethroned him in 2018.

Charlo, 31, is trained by Derrick James, who helped orchestrate Errol Spence Jr.’s 10th round stoppage of Yordenis Ugas to pick up a third welterweight title on April 16 from AT&T Stadium in Arlington, Texas.

Charlo and Castaño went toe-to-toe for 12 grueling rounds the first time they fought on July 17, 2021 on SHOWTIME, with the back-and-forth tilt ending in a split-decision draw. Charlo didn’t leave it in the judges’ hands on Saturday.

“This is legacy,” Charlo said in the ring afterward. “This is something that is legendary. I’m a legend. I knew Castaño was going to give it his all. I knew I had trained very, very hard but you all can see that I came in at 152 pounds because I was really in shape, and I wanted to make sure that this was my fight.”
The rematch was previously announced to take place on March 19 but was rescheduled after Castaño suffered an arm injury in training. The delay angered Charlo, who accused Castaño of gamesmanship in the run-up.

But the two shook hands and praised the other’s tenacity on Saturday after sharing the ring for a combined 22 rounds.
“We showed that we are warriors,” Castaño said. “We both were fighting back-and-forth. He’s a champion. He hit me. He got me. But I’m okay.”
Castaño again caused the rematch to start later than scheduled when he arrived late to the arena on Saturday night, pushing back the start of the match. Instead of fighting angry and impatiently, Charlo produced a calm, clinically efficient and ultimately punishing performance.

“I don’t care about being late,” Charlo said. “I don’t care about who’s early. I knew once I got to this arena, and I’m fighting outside in this beautiful place, I had to get it on.”
Expecting Castaño to fight aggressively and apply pressure, Charlo boxed effectively off his back foot, utilizing a hard jab and a counter-left that repeatedly found its target, none more violently than the final moments of the match.

Just like the first match, Castaño again landed a number of overhand rights and was successful in spots with his constant pressure. The fight was again fought at a torrid pace with both fighters hurting the other. But just like in the first fight, when Charlo gathered strength as the fight went on and won the final three rounds on all the judges’ scorecards, Charlo again wrested control of the bout in the late stages on Saturday.

“I listened to my corner this time,” he said. “I got in my bag around the seventh round. I started sitting down a little bit more instead of boxing so much and moving around. I saw that he was wearing down a little bit and I was breaking him down. I just saw my punches being more effective. I get stronger in the later rounds if they didn’t know.” 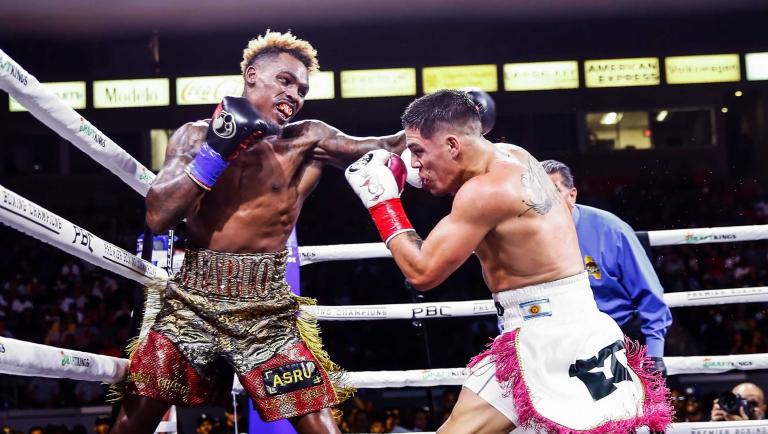