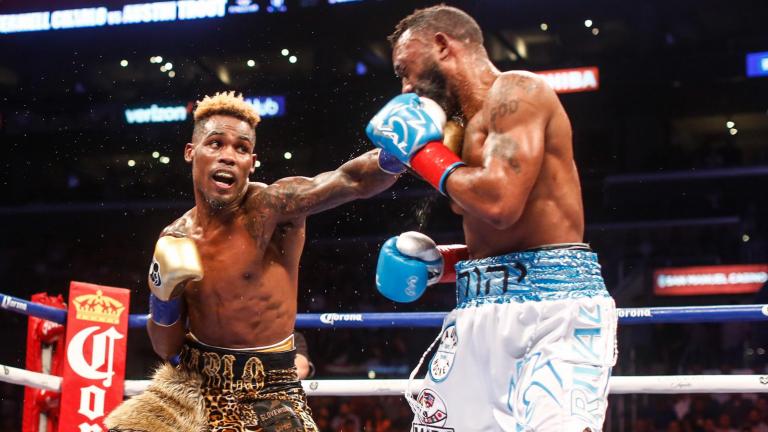 Charlo outmuscled Austin Trout to the tune of a 12-round majority decision in the co-featured bout on the Leo Santa Cruz-Abner Mares fight. Charlo retained his WBC 154-pound title with the win on scorecards 118-108, 115-111, and a garbage 113-113 score from judge Fernando Villarreal (who had also inexplicably scored McWilliams Arroyo-Carlos Cuadras a draw).

The fight opened with some heavy boos as both fighters looked to establish their offense. Charlo was able to earn the nod in the first two rounds with spurts of effective aggression. He landed lead rights and then Trout would tie him up, keeping him from landing follow-ups.

The fight picked up in the third round as Charlo landed a right hand that hurt Trout, and a follow-up didn't land cleanly but resulted in Trout being put on the canvas. Referee Jack Reiss ruled it a knockdown, and Trout was in a big hole early on.

Jermell just seemed to be too strong for Trout, using that strength on the inside to push Trout out of a clinch and land big shots that bothered Trout. Charlo bullied Trout in the fourth and fifth rounds, landing big right hands out of a clinch.

Trout had a bit of a renaissance in the sixth round, landed a couple flashy combinations that may have edged him the round. Charlo got a little frustrated in the seventh by Trout's veteran tactics, another close round.

The ninth round saw Trout visiting the canvas in the opening seconds, turning the fight back in Charlo's favor with one punch. Trout seemed okay but weary of Charlo's power.

Trout had a good showing in the 10th round, tagging Charlo with a four-punch combination before taking a Charlo punch with Trout between the ropes. Reiss warned Charlo for the foul and it seemed to stall Trout's offense.

The pace slowed in the championship rounds with Charlo doing slightly better work. Somehow he walked away only with a majority decision despite scoring two knockdowns.