Prior to his 154-pound fight against Joachim Alcine in his hometown of Houston, Jermell Charlo talked about his desire to build a boxing hotbed of sorts in his backyard. If he’s looking for some marketing material to push his mission forward, all he needs to do is distribute tape of Saturday’s performance throughout the Space City.

Facing an opponent 14 years his senior, Charlo (27-0, 12 KOs) once again proved that youth is king in the ring, using his lightning-quick speed and thunderous punching power to break down Alcine (35-8, 21 KOs), keeping his perfect record intact with sixth-round technical knockout at NRG Arena.

Fighting in front of friends, family—including unbeaten twin brother, Jermall—and youth fighters from his nearby boxing gym, Charlo wasted no time jumping on Alcine, firing a big overhand right that caught the former champ flush just 30 seconds into the bout. From there, the 25-year-old Charlo methodically used his jab to set up—and land—big power shots.

By the third round, Charlo was in firm control of the contest, and after wobbling Alcine with two big right hands—one in the third and one in the fourth—it seemed only a matter of time before the hometown favorite would find the winning formula.

That time came in the sixth, when Charlo dropped Alcine with a vicious right uppercut followed by a short right hand. Alcine made it to his feet and after the fight resumed, he actually connected with a solid right hand of his own. Unfortunately for him, Charlo walked right through it and kept firing away.

Midway through the round, Charlo just missed with a sweeping left hook, but then hit the mark with a follow-up overhand-right/left-hook combination that sent Alcine staggering into the ropes. As one final short right to the jaw connected, referee John Schorle stepped in and halted the fight at the 1:21 mark.

With that, Charlo had his first stoppage victory in more than two years. More importantly, he kept the Charlo name unblemished: He and Jermall, who won a 154-pound title in September, are now a combined 49-0. 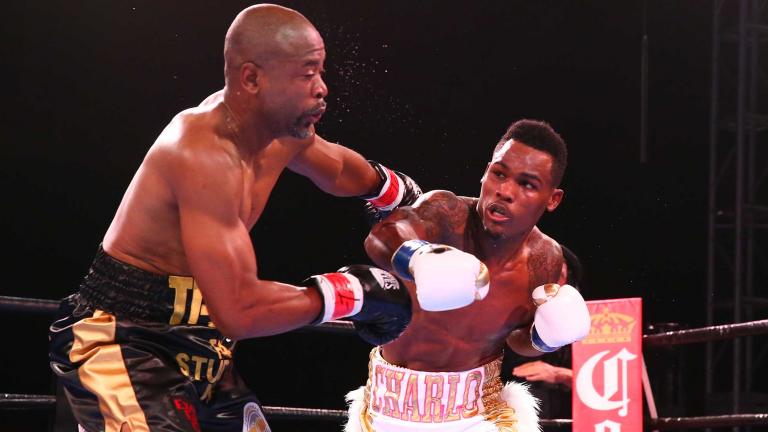 Jermell Charlo has let it be known that he intends to turn his hometown of Houston into a kind of boxing mecca. If he’s looking to advance his efforts with some marketing material, all he needs to do is blast out highlights of his performance Saturday night in the Space City.

What’s scarier: Jason Voorhees carving his way through his 10th Crystal Lake coed in an hour, or the Sugar Ray Robinson-Jake LaMotta scene in “Raging Bull?” If you aren’t sickened and a little terrified watching Robert De Niro take that beating, then Martin Scorsese failed you in some way.

When Jermell Charlo takes on Joachim Alcine on Halloween night at NRG Arena, it will be only his second time headlining a card—and the first time he’s done so in his hometown of Houston.