Jermell Charlo gained an eighth-round knockout of John Jackson to join his twin brother as a 154-pound world champion.

Jermell Charlo didn’t expect to pursue John Jackson around the ring, but he finally caught up to him in the eighth round and landed a world championship.

Charlo was losing on all three judges’ scorecards in the 154-pound title fight when he staggered Jackson with a right hand to the temple, and then followed with two punishing lefts when his dazed opponent turned away to adjust his mouthpiece and failed to keep his guard up.

Referee Tony Weeks immediately jumped in to protect the slumped Jackson, who was knocked into the corner turnbuckle, and signaled the knockout 51 seconds into the eighth.

In winning the vacated world title, Charlo joined his twin brother as a 154-pound champion two days after the Houston residents celebrated their 26th birthday, as he preceded Jermall Charlo’s successful title defense against Austin Trout.

Jackson surprised Charlo early by coming out and boxing, and used his footwork to circle the ring and control the distance.

Charlo slammed his gloves together in frustration at the end of Round 4 after Jackson continued to outbox him.

Jackson led 69-64 on all three judges’ scorecards at the time of the stoppage.

The 27-year-old U.S. Virgin Islands native experienced a similiar defeat in June 2014 when he lost to Andy Lee, who trailed 39-36 on all three judges’ cards before gaining a fifth-round knockout. 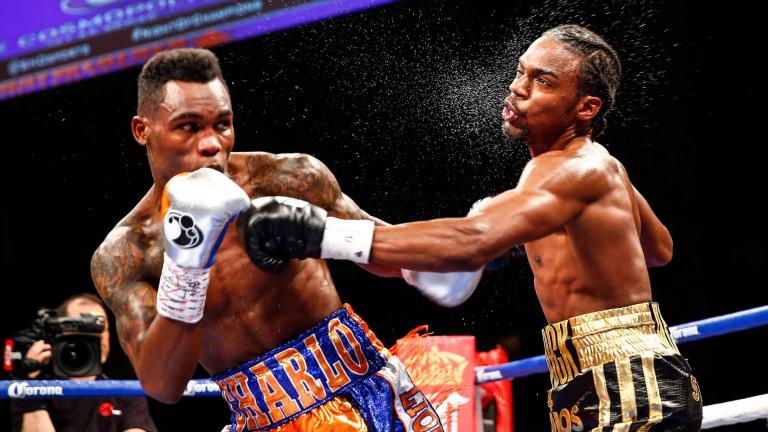 Jermell Charlo was behind on the judges' scorecards before he knocked out John Jackson in the eighth round of their 154-pound title fight in Las Vegas. (Stephanie Trapp/Mayweather Promotions)

This week in boxing history, PBC looks back at a pair of heavyweight legends defending their crowns, two pulse-raising bouts that were named Fight of the Year and a history-making night in the 154-pound division.

Jermell Charlo didn’t expect to pursue John Jackson around the ring Saturday night, but he finally caught up to him in the eighth round and landed a world championship.

Jermell Charlo hints at a knockout although he’s considered more of a boxer-puncher, while John Jackson vows to display his versatility although he’s known primarily for his power.