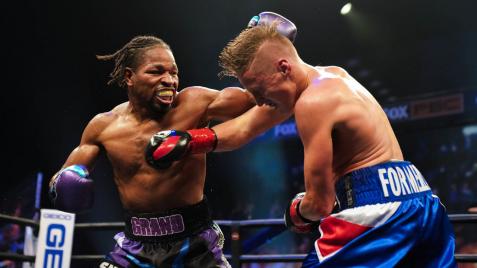 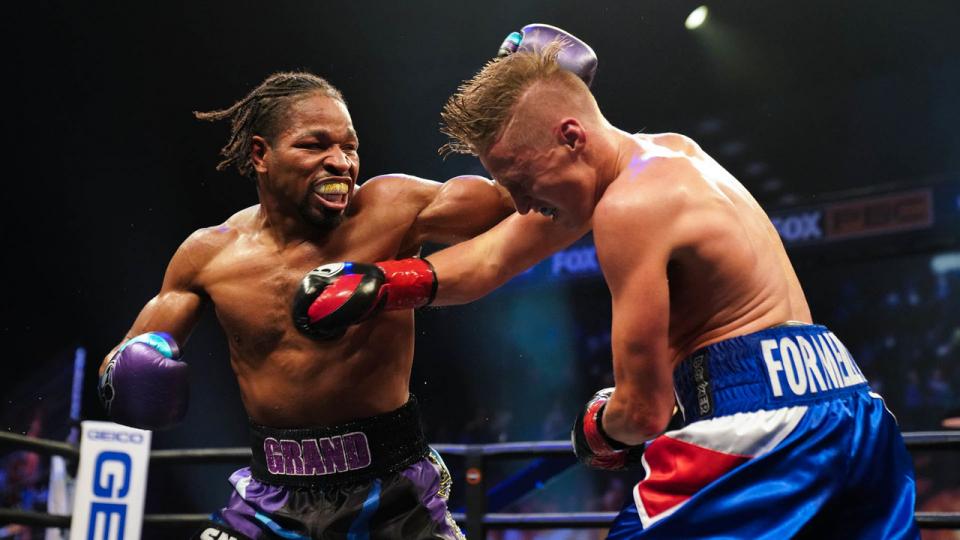 Shawn Porter dominated previously undefeated Sebastian Formella, shutting him out on all three cards to win a 12-round unanimous decision in a WBC/IBF welterweight title eliminator. 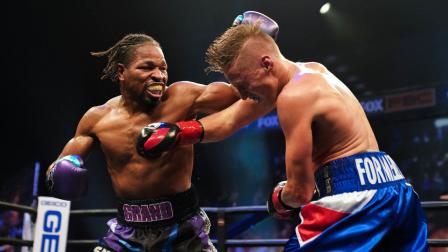 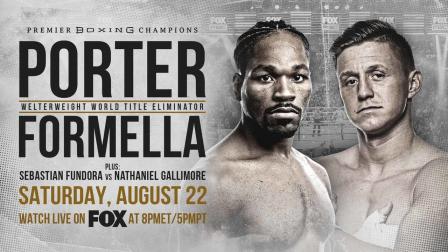 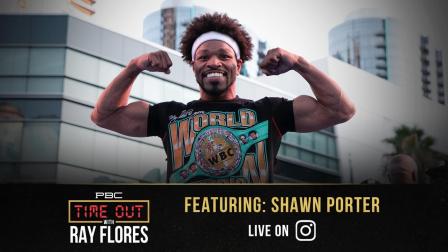 Father's Day: A Celebration of Life

Robert Guerrero, Caleb Plant, Shawn Porter, Joey Spencer, and each of their fathers, celebrate their bond in and outside of the ring.

Errol Spence Jr. WINS against Shawn Porter by SD in Round 12 of 12

Expect unrelenting intensity and nonstop physical fireworks when 147-pounder Shawn Porter climbs into the ring. Trained by his father, Porter compiled 276 wins as a standout amateur before becoming a two-time world champion as a professional.

From the field to the ring

Porter looks like a football player. The broad, thick shoulders, that beefy torso, those piston-like legs that are always propelling him forward as if he was driving himself into a tackling sled.

It’s as if he was born to shed blockers. In fact, Porter was an all-conference high school football standout in his native Akron, Ohio.

This may seem like trivia considering that Porter has since become a star boxer. And then you see him fight.

The way he charges around the ring, swarming his opponent with an all-out physical assault, suggests that Porter’s gridiron background served as an incubator for the athlete that has emerged today.

Porter won the World Golden Gloves championship in 2007, but he came up just short of qualifying for the 2008 U.S. Olympic team.

He turned pro soon after that, and made his debut with a first-round technical knockout of Norman Johnson in Salisbury, Maryland, in October 2008.

As he rose through the ranks, Porter became a reflection of his no-nonsense dad.

“Iron sharpens iron,” Kenny Porter said of training his son in an interview with the Los Angeles Times in 2014. “He is like me: unstoppable."

From sparring partner to champion

As a rising pro, Porter sparred with Manny Pacquiao in the Philippines in 2010 and 2011, gaining experiencing and honing his style, which is a mix of explosive movement, relentless punching and technical prowess.

This skill set was on display when the unbeaten Porter fought 147-pound champ Devon Alexander in Brooklyn, New York, in December 2013.

Porter’s nonstop pressure helped him maintain control of the fight, and he took the title in a 12-round unanimous decision.

Despite his skill at moving around the ring and picking off punches before returning fire, Malignaggi couldn’t withstand the Akron native’s attack, and Porter gained a fourth-round TKO to successfully defend his title.

In August 2014, Porter suffered his first loss at the hands of British fighter Kell Brook, who was awarded a 12-round majority decision in Carson, California, to take the world title.

Porter has dealt with disappointment before, namely a 10-round split-decision draw with Julio Diaz in 2012, which he avenged with a win against Diaz the following year.

“You have to go through things and learn things about yourself,” Porter told the Los Angeles Times in July 2014.

“I’ve learned I have what it takes to be at this level now. I always knew it, but getting through fights when you get cut, getting through long fights where guys just don’t quit for 12 rounds, now you really know it.”

Battering Bone in his PBC debut

Porter was scheduled to fight Roberto Garcia on March 13, 2015, in the first Premier Boxing Champions card to air on Spike TV, but Garcia was hospitalized with an illness the day before the fight.

Erick Bone replaced Garcia as Porter's opponent, and had to fly cross-country for the bout at Citizens Business Bank Arena in Ontario, California.

Porter floored Bone with a body shot in the fifth round before finishing him off moments later with a left hook to gain the first knockout in PBC history.

Porter took on Cincinnati native Adrien Broner in a 144-pound catchweight bout at the MGM Grand Garden Arena in Las Vegas on June 20, 2015, in a fight dubbed the "Battle for Ohio” and broadcast live in prime time on NBC.

Porter immediately imposed his will on Broner, knocking him into the ropes in the first and second rounds as Broner continually tried to tie up Porter.

Porter picked up the pace in the fourth round as he hammered Broner with left hooks to the head and body.

Broner was warned numerous times in the right for holding, and referee Tony Weeks finally deducted a point from him in the 11th round.

Porter let down his guard momentarily in the 12th round and was knocked to the canvas by Broner.

It wasn't enough to affect the outcome, though, as Porter won a unanimous decision.

It was a fight that lived up its billing—and then some—when Porter took on Keith Thurman at Barclays Center, in Brooklyn, New York, on June 25, 2016 on a Premier Boxing Champions show viewed nationally in primetime on CBS. Many debated the winner, since Porter started strong and appeared to win the opening three rounds.

Thurman, however, increased his work rate and won the last three. All three judges had it in favor of Thurman by identical 115-113 scores. Porter’s fight with Thurman drew 12,718, then the second-highest total to see a fight since Barclays opened in 2012. The CBS telecast averaged 3.1 million viewers, making it the most watched bout up until then in 2016.

BACK IN THE WIN COLUMN

Porter tallied his first stoppage in almost two years when he vanquished rugged veteran Andre Berto at 1:31 of the ninth round on April 22, 2017 at Barclays Center in Brooklyn, New York, in a Premier Boxing Champions card on Showtime.

Porter survived a head butt in the second, which opened a cut. Still, Porter tagged Berto with a right that dropped him to the canvas for a second-round knockdown. Berto valiantly regrouped and hung around for seven more rounds before Porter increased the pressure.

A Porter right forced Berto to stumble into the ropes and was considered the first of two ninth-round knockdowns. Unsteady, Berto could not fend off another right, which spelled the end for Berto at 1:31 of the ninth.

That November, Porter won a 12-round unanimous decision over the tough Adrian Granados at Brooklyn’s Barclays Center.

On September 8, 2018, Porter took on former two-division world champion Danny “Swift” Garcia for the vacant WBC world welterweight title at Brooklyn’s Barclays Center. It was one of the most anticipated bouts of the year, a battle between two of the best 147-pounders.

Both affirmed their status among the world’s best in this grueling battle, but it was Porter who surprised, mixing in movement and boxing ability to go along with his athleticism and brawling style. It was tight to the very end, but Porter’s versatility proved to be the difference as he became a two-time world champion by two scores of 115-113 and a third of 116-112.

NO REST FOR THE WEARY

It was neck and neck all the way as Ugas stalked the champion, using his superior height and length to land on the outside. But with the fight hanging in the balance in the championship rounds, Porter bit down and outworked the challenger to win a 12-round split decision. One judge had Ugas ahead, 115-113. The other gave Porter the nod by scores of 117-111 and 116-112.

It was a battle for the ages.

For 12 rounds, the champions engaged in a thrilling back and forth that left the 16,702 breathless—and on their feet for much of the bout.

Spence would score a knockdown in the 11th, sealing the deal on a split-decision win in a fight where there were no real losers and the fans were the biggest winners. One judge scored it 115-112 for Porter while the other two both had it 116-11 for Spence.

"He's a strong kid," said Porter. "We both came in to do the job. I think I had a little more than what he expected, but he handled it. Congratulations to him and his team. We're proud of what we did."

It was complete and utter domination. Shawn Porter had his way against Sebastian Formella, pitching a 12-round shutout on all three cards to win a unanimous decision in their WBC/IBF welterweight world title eliminator Saturday night on FOX PBC Fight Night.

All of Porter’s skills were on display against a Formella who may have been unknown outside of his native Germany but gained the respect of boxing fans all over with his gritty display against one of boxing’s elite.

“He was a tough fighter,” said Porter, who is now 31-3-1 (17 KOs). “After about six rounds my dad told me that he’s going to keep taking these punches, so I just needed to keep the pressure on him.”

Formella’s best efforts weren’t enough to overcome Porter, who was at the top of his game. The Akron, Ohio product landed hard jabs on the outside and leaped in with quick lead hooks. He had the advantage in close quarters as well, pounding Formella’s ribcage with both fists.

Round after round, Porter tore into Formella with combinations. At 32, the two-time world champion possesses the hand and footspeed of a fighter 10 years his junior.

It looked as if Porter might obtain the stoppage in the seventh, as he repeatedly snapped Formella’s head back with a series of left hooks. It was more of the same in the eighth, except this time, Porter’s attack was focused to the body.

Formella (22-1, 10 KOs) never wilted. Every now and then he’d land a one-two to remind Porter that he was still there. However, he never seriously threatened to win a round, let alone the fight.

Porter punished him around the ring, never finding the KO punch but winning by scores of 120-108 on all three cards.