Unbeaten 147-pound contender and Dallas product Errol Spence Jr. put on a show for his hometown fans, dominating Alejandro Barrera for four rounds before finishing him off in the fifth.

It was a textbook dismantling, with pages inked in his opponent’s sweat and blood. Errol Spence Jr. (19-0, 16 KOs) took apart yet another overwhelmed challenger at The Bomb Factory in his native Dallas on Saturday afternoon, stopping Alejandro Barrera (26-3, 17 KOs) for the first time in the Mexican fighter’s career.

Spence, one of the sport’s brightest hopes, has yet to be tested in his pro career, and Barrera was the boxing equivalent of a pop quiz for which Spence had the questions—and answers—in advance.

Barrera had a 6½-inch reach advantage and initially attempted to use that edge by boxing from the outside behind his jab and keep moving to avoid Spence’s charge. However, it was Spence’s jab that ruled the day.

Spence doesn’t just flick that jab as a means of setting up his left hand; he throws it with more force then plenty of other fighters’ power punches. From Round 1, the southpaw continually rocked Barrera with his jab, then followed it up with a short, sharp left uppercut to the body.

Barrera looked punch drunk as early as Round 2, when Spence peppered him with combinations, pumping his jab followed by left hands before stepping to the side and landing yet another shot or two.

Barrera inexplicably kept circling to his right, square into Spence’s punishing left hand. And whenever he did manage to land a counter shot, Barrera was throttled for his efforts, such as in Round 4, when he scored with an uppercut only to be rocked by Spence's straight left hand that left the 29-year-old noodle-legged for a moment.

By Round 5, Spence began to focus more on a withering body attack, dropping Barrera with a savage right to the ribs, forcing him to take a knee as blood dripped from his nose.

Barrera would get to his feet only to soon be knocked back on his heels, as a charging Spence hammered his wide-eyed opponent into submission at the 1:46 mark of the round. When Laurence Cole stepped in and officially ended the beating, Spence had his fifth consecutive TKO victory. 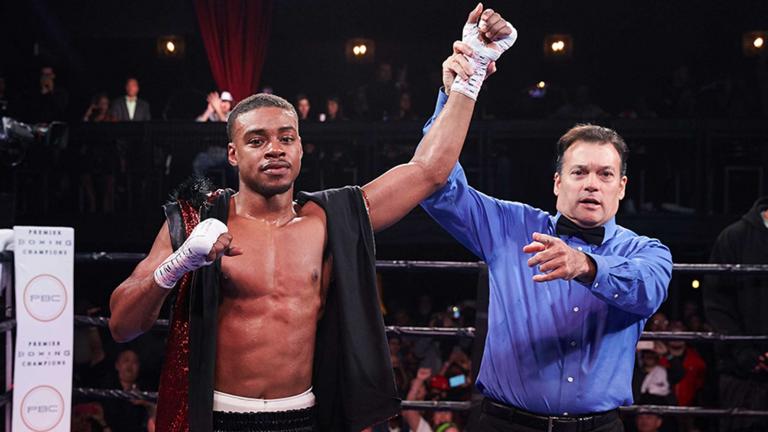 From prospect to contender: Errol Spence Jr. is the PBC Rising Star of the Year

Phil Lo Greco sucked in a deep, futile breath, looking like he didn’t know what just hit him, even though the brute behind said blow was standing right in front of him, poised to deliver plenty more.

It was a textbook dismantling, with pages inked the sweat and blood of Errol Spence Jr.'s opponent.

Errol Spence Jr. stepping up to 12-round rumble with Alejandro Barrera

Errol Spence Jr. has had brief fights. Lord knows, he’s had plenty of those, with 15 knockouts in 18 wins.