Since making his professional debut at age 18, exciting Texan Mario Barrios has been blasting opponents all the way to becoming a Super Lightweight World Champion. Read Bio 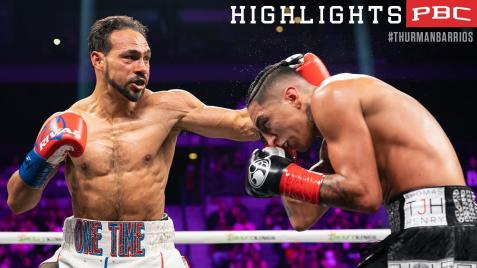 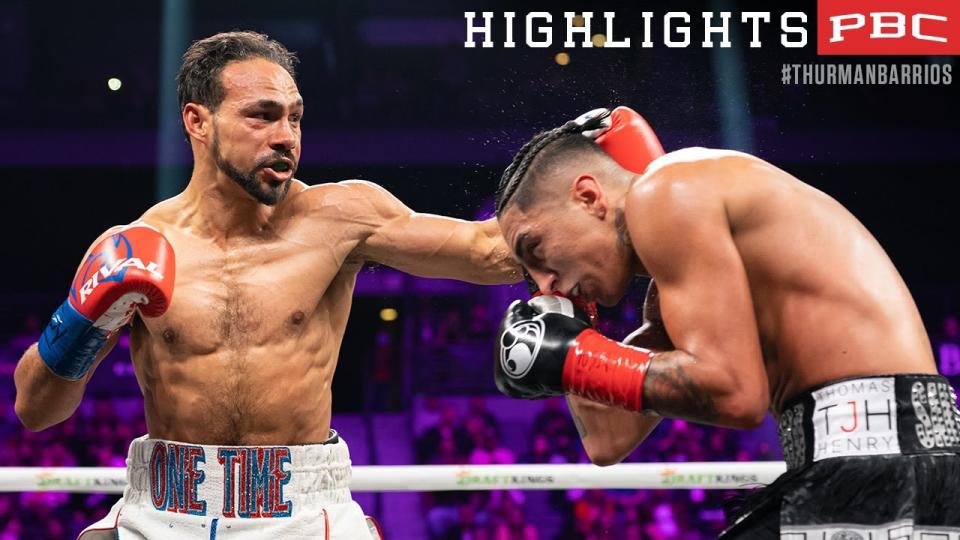 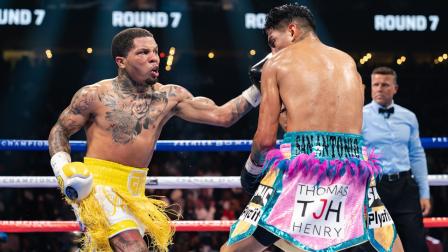 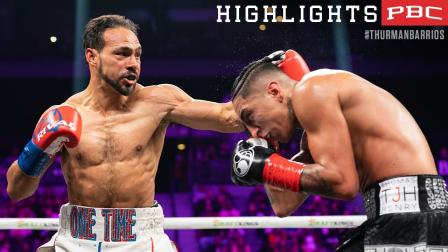 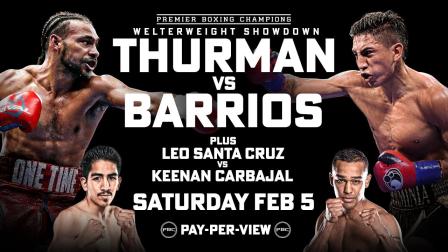 The incredible story of the upbringing of the former super lightweight champion.

Mario Barrios is Daring to be Great

The former 140-pound titlist looks to establish himself in one of boxing's glamour divisions when he faces former unified welterweight champ Keith Thurman in a 147-pound showdown Saturday night on FOX Sports PBC pay-per-view.

Mario Barrios is one of the best young fighters in boxing today. Under the guidance of respected trainer Virgil Hill, Barrios became a world super lightweight champion. The sky is the limit for this multi-talented Texan who now campaigns in the talent-laden welterweight division.

MAMA SAID KNOCK YOU OUT

Mario Barrios began boxing at the age of six when his mother, Isabel Soto, took him and his sister Selina to the gym.

“I watched boxing with my father. I remember watching Roberto Duran and Sugar Ray Leonard, all the great fighters,” said Isabel, who, with her husband, Martin, raised Barrios, older sister Selina (26) and their two younger siblings, Vanessa (17) and Valencia (15).

“I watched Christy Martin and thought, ‘I want to do that.’ I wanted to be a boxer. The problem was that I lived in Wisconsin and there were no opportunities for me to box there. Then, when I moved to San Antonio and had Mario and saw how big boxing was here, I looked for a gym and my husband (Barrios’ stepfather, Martin Soto) and I signed him up.”

Isabel took Barrios and Selina, then an 8-year-old, to the Eastside Boys and Girls Club in San Antonio, Texas. As they matured, Martin trained them as adults. Selina set the pace, winning every tournament she entered and being the better of the siblings until they were teenagers.

“It’s then that I started to realize I was pretty good at this,” said Barrios, who was a spindly 5-foot-7 high school senior, idolized past champions Oscar De La Hoya, Tommy Hearns and Salvador Sanchez as a youth and respects contemporaries such as Terrance Crawford and Gennady Golovkin.

“By the time I was a senior, I was 5-7, fighting at 123, even though I was always lighter than that, more like 116, 117. It’s funny, because no one believed I was a boxer because of my build. But each year I grew an inch. I might still be growing. A lot of people I went to grade and high school with freak out when they see how tall I’ve become and where my career is.”

An 18-year-old Barrios ignited his career at 122 ¼ pounds on November 11, 2013, his 99-second stoppage of Rigoberto Moreno taking place before his hometown San Antonio fans at Cowboys Dance Hall.

The debut generated the kind of adulation sought for the young man nicknamed “El Azteca” with almost two-thirds of San Antonio’s residents having Hispanic if not proud Mexican heritage.“San Antonio has a huge Mexican population,” said Mario Serrano, Barrios’ publicist. “San Antonio has had only a few world champions. Only James Leija and a few others were really big. I think Mario is more talented than them. I think he can be really big in this city.”

“Even when I was a kid I was intrigued by my heritage, my culture. I remember when I was in elementary school,” said Barrios. “I was reading books on the Aztec Empire, the civilization and the indigenous people in America. That’s my background and I’m proud of it. I want to represent my people, represent my city. It’s going to be a great honor to bring a world title home.

Barrios went 6-0 with a pair of first-round knockouts in 2014, his final three victories -- between 125 ¼ and 127 ¾ pounds -- being stoppages of Salvador Perez (July) and Abraham Rubio (October) and a four-round unanimous decision over Juan Sandoval (November).

“El Azteca” stepped up his weight, pace and competition in 2015, campaigning from 128-to-131 ¾ pounds, finishing five of seven fights by stoppage and facing six opponents who boasted winning records.

Barrios finished 2015 by returning to San Antonio’s AT&T Center as a 130-pounder on December 12, his sixth-round knockout of hard-hitting Manuel  Vides (18-4, 11 KOs coming in) improving his mark to 13-0 with eight KOs.

Barrios rose to 16-0 with 10 stoppages in 2016 following three bouts contested while weighing 135 ½, 130 and 136 ½, respectively. Comprising the wins were  those in eight and 12 rounds over sixty fight veteran Edgar Gabejan (April) and former European champion Devis Boschiero (July) as well as a second-round knockout of Claudio Rosendo Tapia (December).

Barrios drained and weakened himself to make 130-pounds against Boschiero. But starting with Tapia, he has been powerfully demonstrative at 9--0 with eight knockouts  in as many consecutive 140-pound fights under under 2013 BWAA Trainer of the Year, Virgil Hunter, ending with September’s unanimous decision over previously unbeaten Russian knockout artist Batyr Akhmedov for the WBA’s vacant title.

“My fight [at 130 against Devis Boschiero] was very difficult and in the later rounds I didn’t have the power in my legs. That convinced me that I couldn’t fight at 130 anymore. I feel good at 140; super strong and ready to do something in this weight class,” said Barrios.

Barrios was 20-0 with 12 knockouts after halting all three opponents in 2017 consisting of a sixth-round stoppage of Yardley Armenta Cruz (March) and consecutive seventh-round knockouts of Jose Luis Rodriguez (June) and Naim Nelson (September).

“I’ve naturally filled out into this weight class. I’ve seen a huge improvement since moving to 140 and working with Virgil, especially in my boxing IQ. I’m absorbing as much knowledge and insight as I can. There are subtle changes like using my jab properly,” said Barrios.

“Working with Virgil has helped me grow intellectually and physically. We’re making significant progress as my strength and power have carried up. I’m fighting at that world championship level. I don’t go looking for knockouts, but I’ve been setting up good punches, dominating every fight and ending them early.”

That domination continued in March 2018 as Barrios returned to San Antonio, where he flattened Eudy Bernardo in the second round at Freeman Coliseum on the undercard of four-division champion Mikey Garcia’s one-knockdown, unanimous decision that dethroned 140-pound titleholder Sergey Lipinets.

Barrios improved to 4-0 with three knockouts in San Antonio against Bernardo, who entered at 23-2 (17 KOs) and had scored consecutive first-round knockouts. “El Azteca’s” 2018 followup was July’s two-knockdown eighth-round stoppage of Jose Roman, who entered their bout at 24-2-1 (16 KOs) and was knocked out for the first time in his career.

It was more of the same in 2019 with consecutive fourth- and second-round knockouts of Richard Zamora (February) and Juan Jose Velasco (June) preceding his crowning achievement against Akhmedov.

Zamora entered at 19-2 with 11 knockouts and had stopped two of three straight opponents in the first round and the other in the third. Velasco, whom Barrios stopped with a sensational left hook to the liver, was coming off an eighth-round TKO loss to former WBA titlist Regis Prograis.

Barrios then dropped Akhmedov (7-1, 6 KOs) in the first round of an action-packed, close unanimous decision victory, ending the loser’s run of four straight stoppage wins.

"I knew this was going to be a war. [Akmedov] was getting dirty in there but the Mexican warrior in me was not going to let this opportunity pass me by. I dug deep and got the victory,” said Barrios of Akhmedov, a fight that happened on the undercard of Errol Spence Jr’s split decision over Shawn Porter in defense of his IBF/WBC 147-pound titles.

“I wanna show I’m a complete fighter, not just a boxer or a puncher, but all-around. I have size, speed, boxing ability and power. I’m not killing myself making 140. I’m strong and looking to stay here for as long as I can. But I believe 147 and 154 are the gold mines of boxing right now where all the champions and big fights are happening. I would be honored to fight any of the champions at 147 in the future.”

On October 31, 2020, Barrios defended his title against "Cowboy" Ryan Karl in an all-Texas showdown at the Alamodome in San Antonio, live on SHOWTIME pay-per-view.

Under the brightest of lights, Barrios shined, showing his superiority in every facet of the game.

The fight broke open in the sixth round when Barrios landed a straight right hand that sent Karl down for just the third time in his career. Karl's problems were further exasperated after an accidental clash of heads created a brutal cut on his forehead which proved to be too much to cope with. The 25-year-old Barrios smelled blood and closed the show in emphatic fashion, landing a left hook that sent Karl down and out at 2:23 of the sixth round. At the time of the stoppage, Barrios was ahead on all three scorecards (48-47 and 49-46 twice).

In the all-important sixth round, Barrios landed 29 of his 58 power punches against a very tough Karl, who threw 60 punches per round but landed just 18 percent of those punches.

"I told them we'd get this first title defense, and I hope everyone enjoyed it," Barrios said afterward. "I was just being patient and picking my shots. I started to really land them and got him out of there. I was ready to go a hard 12 rounds, but my patience helped me get him out of there. I listened to what Virgil [Hunter] was telling me in the corner. It was great to get the job done here at home."

On June 26, 2021, Barrios defended his title versus undefeated two-division champion Gervonta "Tank" Davis. The headliner took place in front of raucous crowd of 16,570 at State Farm Arena in Atlanta, live on SHOWTIME pay-per-view. In a thrilling Fight of the Year candidate, Davis and Barrios fought on even terms for much of the bout. Davis ultimately broke through in the eighth, putting Barrios down twice and then two more times in the eleventh to win via TKO. However, there were no real losers on this night.

“Tank’s explosive,” Barrios said. “He caught me slipping (in the eighth) and it’s boxing. At the end of the day, one punch can change the fight. That’s exactly what I felt happened. Congrats to him. Of course, I wanted to continue. I got up for a reason. I told everybody that I was going to show the Azteca Warrior that I am.”

Barrios made his welterweight debut against former unified champion Keith Thurman on February 5, 2022 in a FOX Sports PBC pay-per-view headliner in Las Vegas. Barrios was game throughout but ultimately dropped a 12-round unanimous decision.

"Tonight I showed the Mexican warrior in me. I take my hat off to Keith Thurman, he’s a warrior as well. We gave the fans a great fight,” said Barrios.