Mario Barrios towered over Devis Boschiero in the ring in every which way, and took a giant step forward to a 130-pound world title shot in the process.

Standing nearly 6-foot-1, Barrios used his exceptional height and reach advantages to control the 5-foot-5½ Boschiero from the outset and cruise to a 12-round unanimous decision.

With the decision already well in hand, Barrios sealed the deal when he floored the former world title challenger in the final round to earn a clean 120-107 sweep on all three judges’ scorecards.

The knockdown was one of the few bursts of action in the fight as the length of Barrios continually frustrated Boschiero, a 34-year-old Italian who was making his U.S. debut.

The victory marked the first time the 21-year-old Barrios went past eight rounds in his career, and it moved the San Antonio native into the No. 2 position for a shot at 130-pound world champion Jose Pedraza.

Barrios barely needed more than his jab to keep Boschiero at bay, and simply the threat presented by his length was enough to keep the former European champion seemingly frozen at times.

Barrios dropped Boschiero to a knee with a left uppercut in the 12th round, and the Italian veteran rebounded well enough to instigate a frenzied exchange until the final bell, but it was a rare show of aggression on his part. 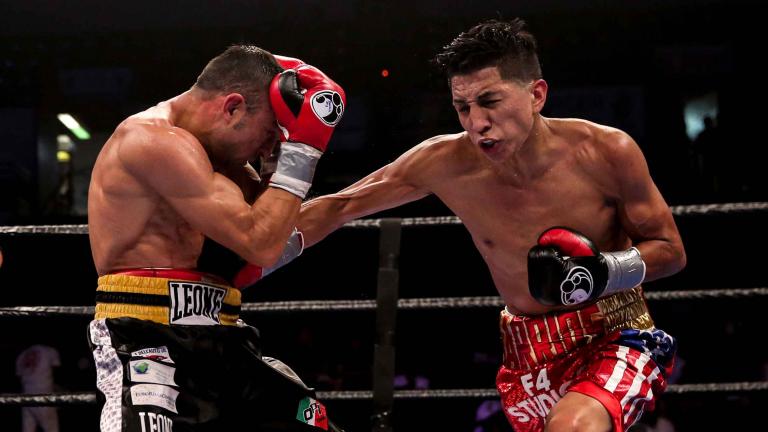 Barrios proves to be too long, too much for Boschiero to handle

Mario Barrios towered over Devis Boschiero in the ring in every which way Saturday night, and took a giant step forward to a 130-pound world title shot in the process.

Barrios ready to take down Boschiero, march on to bigger things

Cornermen are paid to not only train their fighters but to believe completely in their capabilities and future potential. Needless to say, trainer Bob Santos is all-in on one of his young charges, 21-year-old Mario Barrios.

By the time he enters the ring against Devis Boschiero on Saturday, Mario Barrios will have spent nearly a month developing a champion’s mentality at the Las Vegas home of two-division title winner Robert Guerrero.