In a thrilling, back-and-forth brawl, Keith Thurman eked out a unanimous decision over Shawn Porter to retain his 147-pound title.

Prior to his title defense against Shawn Porter, Keith Thurman called the bout “a steppingstone” toward becoming the new face of the 147-pound division following the retirements of legends Floyd Mayweather Jr. and Manny Pacquiao. 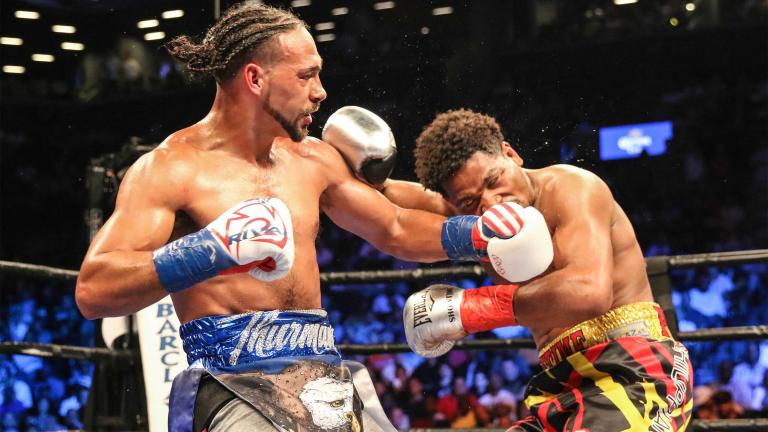 The champion nicknamed “One Time” took a major leap in that direction—although it was far from easy.

The fight was expected to be a high-caliber war of skills and wills, and it was just that, as Thurman attempted to use upper-body movement, stay off ropes, clinch, and catch Porter ducking into hooks and uppercuts. At the same time, the 28-year-old challenger often effectively executed his short inside game, closing distance and occasionally smothering and battering Thurman to the ropes.

In an active opening round, Thurman landed an early hook, two rights and another hook late, but the swarming Porter came on in the second, twice trapping Thurman on the ropes and drilling home double-handed shots to the head and body.

Thurman stunned Porter with a clean right hand-left hook combination late in the third, but the challenger answered with a three-punch combination before the bell.

In Rounds 4 through 6, Thurman unleashed from distance, occasionally catching Porter ducking into left hooks, one of which rocked the challenger in the fourth. But an undeterred Porter continued to come forward, continuing to push his 27-year-old foe into the ropes, where he let loose with a double-handed attack to the head and the body.

Thurman dominated most of Round 7, absorbing a hard right but controlling the remainder of the stanza with jabs, hooks and rights against the retreating Porter. But in keeping with the give-and-take nature of the entire bout, the challenger made Thurman double over with a body-rippling left hook to the liver before the bell.

Although both fighters bled from cuts around their eyes in the later rounds—Porter beneath his left, Thurman over his right—both continued to throw and absorb big bombs, including a 10th-round left hook that nearly dropped Porter.

Thurman found the mark yet again in the 11th, landing an even more vicious, head-swiveling hook. But, again, Porter took it and responded with his own attack, appearing to mostly out-hustle and out-muscle the champ during most of the final round.

Underscoring how competitive this long-anticipated fight was, Porter had the slightest of edges in overall punches landed (236-235), but Thurman connected on more power shots (203-177). The longtime friends combined to fire more than 1,200 punches at each other, the overwhelming majority thrown with bad intentions.

It was a fight that was as competitive as it was engaging, a championship bout in which both participants put it all on the line until the final bell sounded. In the end, there would be only one winner in the world title fight between Keith Thurman and Shawn Porter, but there certainly was no loser.

Presenting the 12 Rounds of Christmas: Round 9 (Thurman vs Porter)

You didn’t think we’d forgotten about this fight, did you?

Thurman ponders what’s next after triumph over Porter

Keith Thurman is plotting his next move in the wake of Saturday’s hard-fought victory over former champion Shawn Porter at Barclays Center in Brooklyn, New York.