Porter put himself in position for the return encounter with a ninth-round TKO of Andre Berto in their 147-pound title eliminator at Barclays Center.

Porter scored one knockdown in the second and another in the ninth before scoring the stoppage when referee Mark Nelson waved an end to the bout at 1:31 of Round 9.

With the victory, Porter is now the No. 1 contender to one of the 147-pound world titles owned by Thurman, who eked out a close unanimous decision over Porter in Brooklyn last June.

In the ring after the fight, Thurman said he welcomed another meeting with Porter.

Porter was relentless as he pursued Berto around the ring, and he paid a price for it at times. The Akron, Ohio, native, who now lives in Las Vegas, continually marched forward and was cut over both eyes by accidental headbutts during the fight.

Porter, 29, was cut over the left eye in Round 2 and over the right eye in the fourth. Berto also was cut in Round 4 over his left eye, and seemed to be more affected by the head clashes.

Porter even apologized to Berto in the ring afterward, although he stressed that the contact was entirely inadvertent.

While Berto wasn't happy about the incidental contact, the Winter Haven, Florida, native didn’t use it as an excuse. Instead, the former two-time world champion simply accepted that he wasn’t up to the task of beating Porter.

Berto, 33, was bothered by another clash of heads in Round 9 before eating a left hook to the jaw that sent him into the ropes and led Nelson to administer a count. Porter soon closed in for the finish, causing the referee to step in again—this time for good.

Now the wait starts for Thurman and Porter to go at it again. 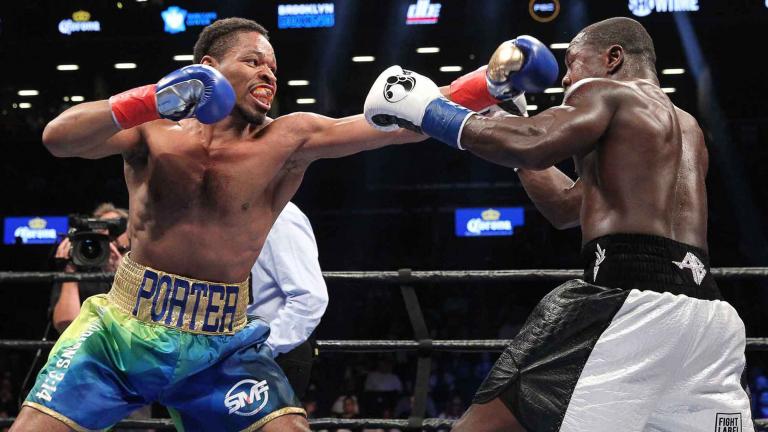 Shawn Porter gets inside with a left hand against Andre Berto during their 147-pound title eliminator at Barclays Center in Brooklyn, New York. (Ed Diller/DiBella Entertainment)

Andre Berto and Shawn Porter watched as Keith Thurman and Danny Garcia competed for a pair of 147-pound world titles in March, both longing for an opportunity to once again regain their footing atop the division.