Porter wins by KO in Round 5

Erick Bone slipped in a few good shots against Shawn Porter, but the fifth round proved just how overmatched the last-minute replacement fighter was.

Porter caught Bone with a big right-hand body shot that stunned the Ecuadorian, opening him up for a right-left-right-left combination, all landing squarely to the head to finish Bone off at 2:30 of the fifth round.

Just prior to the knockout, Porter knocked Bone down and through the ropes with a straight right to the body. Bone got back up, but he was unable to truly recover.

It wasn’t all aggressiveness on Porter’s part: he showed impressive quickness in the ring, ducking under a huge right from Bone in the fourth in a slippery now-you-see-me-now-you-don’t flash.

“I don’t want to make it sound easy because it’s not, but we had a game plan and we stuck to it,” Porter said after the fight. “Mentally, it wasn’t hard. I just stayed to myself and listened to my corner.” 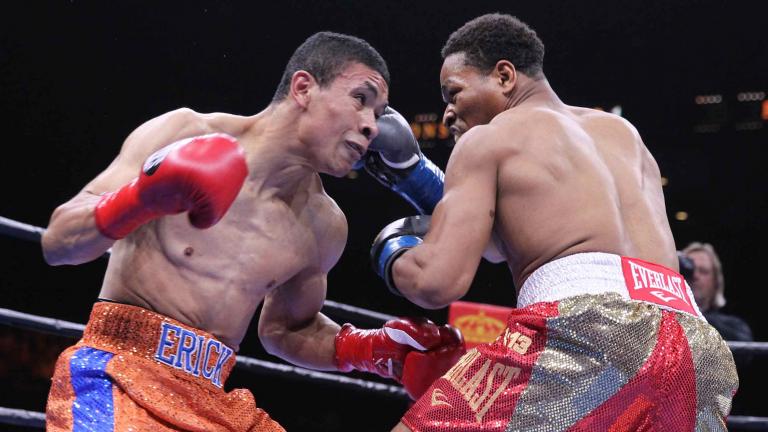 Shawn Porter sticks to his guns in knockout win

Erick Bone slipped in a few good shots against Shawn Porter, but the fifth round proved just how overmatched the last-minute replacement fighter was. It also proved the wisdom of sticking to your game plan.

The Moment for Shawn Porter came in the fifth round Friday night, when he landed a straight right hand to the body of Erick Bone to score one of his two knockdowns.

Shawn Porter gets physical in KO win over Erick Bone

Shawn Porter had something to prove after his August loss to Kell Brook. Which explains why he fought like a bull running loose on the streets of Pamplona against late replacement Erick Bone on Friday night at Citizens Business Bank Arena in Ontario, California, on the first Premier Boxing Champions card on Spike TV.