Shawn Porter won a physical fight that went the distance, earning a 12-round unanimous decision over Adrien Broner in the Battle for Ohio.

His sparkly gold trunks were gaudy as a matador’s getup, and that’s pretty much how Adrien Broner carried himself Saturday night as he attempted to dodge the raging bull that was Shawn Porter.

Porter dictated the pace early, lunging at Broner—actually leaving his feet in doing so once in the first round—bullying Broner into the ropes and hammering him to the body. But by the middle of Round 2, Broner began to get his timing down on Porter’s come forward attack, countering hard, landing a snapping right hand in the middle of round followed by a crisp left a bit later.

Still, it was Porter who continually pressed the action, as Broner seemed content to let Porter initiate his offense and then counter. Neither fighter, though, could find much of an offensive rhythm.

There was a lot of grappling throughout the fight, with Broner in particular resorting to wrapping up Porter in an attempt to smother his attack, sneaking in forearms shivers and hitting behind the head from time to time while they clinched.

In Round 10, Porter seemed to slam the door shut on a Broner victory, outworking him by wide margin, but Broner dropped Porter with a thundering straight left hand in Round 12.

Broner landed hard shots throughout the rest of the round, hinting at what could have been had he engaged his offense more consistently throughout the fight. 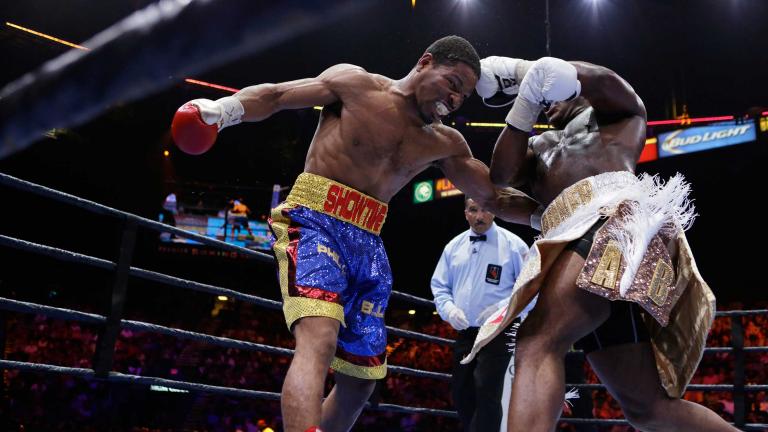 Shawn Porter was dictating the pace in a brutally physical fight with Adrien Broner, but there had been some close frames in a 12-round bout that still had three to go.

Shawn Porter finds calm in the ring, and after

After Shawn Porter finished his business with Adrien Broner on Saturday night, he locked hands with his father and with his pastor, former Philadelphia Eagles great Randall Cunningham.

His sparkly gold trunks were as gaudy as a matador’s getup, and that’s pretty much how Adrien Broner carried himself Saturday night at the MGM Grand Garden Arena as he attempted to dodge the raging bull that was Shawn Porter.