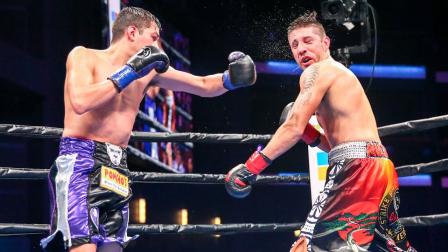 Omar Figueroa goes to war for 10RDs with John Molina Jr. | Figueroa vs Molina click here to get video transcript 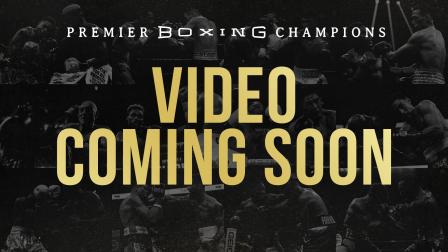 The recently retired former world champion is embracing his new life and mindset after dedicating 25 years to the Sweet Science.

Lipinets delivers dominant performance in this WBC Super Lightweight title eliminator and the brave Figueroa hangs up the gloves afterward.

Omar Figueroa Jr. vs Sergey Lipinets: No Retreat, No Defeat

It's do or die for two former world champions as Omar Figueroa and Sergey Lipinets battle in a WBC Super Lightweight Title eliminator Saturday night on SHOWTIME.

Omar Figueroa Jr. LOSES to Abel Ramos by KO in Round 6 of 12

Omar Figueroa Jr. WINS against Robert Guerrero by TKO in Round 3 of 10

Omar Figueroa Jr. WINS against Antonio DeMarco by UD in Round 12 of 12

An aggressive approach and power-packed punches have made Omar “Panterita” Figueroa Jr. one of the most exciting fighters in boxing. The Texas native has been hampered by hand injuries, but his brawling style helped him become a world champion at 135 pounds.

Since his first professional fight at age 18, the hard-hitting Figueroa has established himself as one of boxing’s rising stars.

Growing up in Weslaco, Texas, Figueroa was introduced to the sport at the age of 6 by his father and trainer, Omar Sr., so he could defend himself.

Figueroa took honors courses in high school, but he already was serious enough about boxing that he made his professional debut on June 6, 2008, less than a month after graduating.

He knocked out Edwin Espinoza in the first round, but was still undecided about his career path.

From college to the school of hard knocks

However, he left college after one semester to pursue a boxing career after quickly finishing off two more opponents in the ring that fall.

Figueroa won each of his first eight bouts in less than three rounds.

It wasn’t until he faced Edgar Portillo in Las Vegas in March 2010 that one of his fights went the distance, with Figueroa winning a six-round unanimous decision.

After dispatching Marcos Herrera with a second-round KO in August 2011, Figueroa faced Michael Perez in a battle of unbeaten 135-pounders in Indio, California, in January 2012.

Perez was favored in the bout, but Figueroa won when Perez was unable to continue after six rounds.

After five more early-round KOs and a win by 10-round unanimous decision, Figueroa fought Abner Cotto in San Antonio in April 2013 in another clash of undefeated fighters.

Once again, Figueroa applied pressure right from the opening bell, and quickly knocked down Cotto twice in gaining a first-round KO. The win propelled Figueroa from prospect to contender.

Figueroa's next bout—against Japan’s Nihito Arakawa in San Antonio on July 27, 2013—was one of the year’s best fights.

When it ended after 12 rounds, Figueroa won by unanimous decision, claiming an interim 135-pound world title.

The duo combined for an incredible 2,112 punches. Figueroa landed 51 percent of his punches, included 450 power shots, which was the third-highest total ever recorded among 135-pounders in CompuBox history.

The fight took its toll on Figueroa’s hands, a recurring problem for the power puncher.

He didn’t return to the ring until April 26, 2014, when he faced fellow Texan Jerry Belamontes, who had beaten Figueroa three times when they were amateurs.

This time, Figueroa was the victor, gaining a 12-round split decision in Carson, California, to retain his championship.

The match was close through eight rounds until an accidental head butt opened a cut across the bridge of Figueroa’s nose and left eye, unleashing his trademark aggression.

Fearing that the referee would soon stop the fight, Figueroa came out strong in the ninth, and landed a barrage of punches that left Estrada struggling before the fight was stopped, giving Figueroa a TKO victory.

The cut across above Figueroa’s eye, however, became infected after the fight, preventing him from immediately defending his championship.

He was stripped of the title in November 2014, and declared a “champion in recess.”

A successful step up to 140 pounds

Figueroa made his debut at 140 pounds against Scotsman Ricky Burns in a Premier Boxing Champions bout that aired live on CBS from Hidalgo, Texas, on May 9, 2015.

Fighting before a partisan crowd near his hometown, Figueroa engaged Burns almost right from the opening bell.

Figueroa did most of his damage in close quarters, nailing Burns repeatedly with shots to the body and head.

Burns repeatedly tried to slow Figueroa by tying up the Texas native, but he had a point deducted from his score in both the eighth and 11th rounds for excessive holding.

On July 15, 2017, Figueroa made his welterweight debut at Nassau Coliseum in New York, facing Robert “The Ghost” Guerrero in a battle of former world champions.

The 34-year-old Guerrero outworked his younger opponent in the opening round, landing 40 of 93 total punches. Figueroa stepped up his output in the second, sneaking in a right uppercut that stunned Guerrero.

At 1:54 of the second, Figueroa unleashed a perfect left uppercut that sent “The Ghost” down on both knees. That triggered something in Guerrero, because he came storming back and pinned Figueroa against the ropes. The younger fighter punched his way out, though, and once again had Guerrero in trouble.

From there, neither fighter could get out of the way of each other, but another pulverizing right knocked down Guerrero a second time with 30 seconds left in the round. Guerrero was barely able to stand before Figueroa landed a body shot, putting him down a third time in the round.

Whatever he had left, Guerrero let loose in the opening seconds of the third. The lionhearted southpaw backed Figueroa up with big, looping shots, leaving himself open for countering uppercuts. It was a short right that dropped the Gilroy, California, native a fourth time, with 2:15 left in the third. Finally, Guerrero’s gallantry gave way, and a left to the body felled him a fifth time.

That was enough for Lipton to end it at 1:30 of the third.

Figueroa followed that up with an equally impressive 10-round unanimous decision over veteran John Molina Jr. in February 2019. But that July, he suffered the first loss of his pro career as Yordenis Ugas outpointed him over 12 rounds at MGM Grand in Las Vegas. Two more losses, a sixth round TKO loss to Abel Ramos in May 2021 and an eighth-round TKO defeat to Sergey Lipinets in August 2022 convinced Figueroa to retire.

“I’m very disappointed about the outcome,” Figueroa said. “My team and I worked so hard during this training camp. My body has reached its limit. I’ve been doing this for 27 years and my body has finally said enough. I’m just sorry I’ve disappointed the fans. The change of opponents didn’t affect me. I think I’ve reached the end of the line here in boxing. It occupied my life for 27 years. My body just gave up. It didn’t respond.”

In the run-up to the Lipinets fight, Figueroa emerged as an eloquent spokesperson for people struggling with mental health issues after he was diagnosed with his own set of mental health concerns. In the ring afterward, Figueroa reflected on his career, on the limitations of his athletic abilities and on the birth of his daughter earlier in the day in announcing his retirement.

“I’m happy that I got to enjoy this last camp. I had a great time,” he said. “For everyone out there going through a tough time or in a dark place, I want to say, ‘don’t you ever give up. Keep up the fight.’”