Omar Figueroa Jr. hit Antonio DeMarco early and he hit him often. To the tune of 1,092 punches thrown on the night, he nearly doubled his veteran opponent’s output, and the high-volume attack lifted Figueroa to a slim unanimous decision in San Antonio.

Figueroa imposed his will in the first half of the fight, keeping DeMarco pinned on the ropes and hammering him with a relentless flurry of shots.

DeMarco, though, managed to figure out a way to both pivot out and punch his way out as the fight went on, starting in the seventh round.

DeMarco continued to rally over the later rounds, and he punished Figueroa in the 11th with an uppercut along the ropes that injected doubt into what had seemed like a certain outcome.

Both fighters abandoned all pretense of finesse or defense in the 12th, with DeMarco winning the final three minutes on all three judges' cards to tighten up the scores. 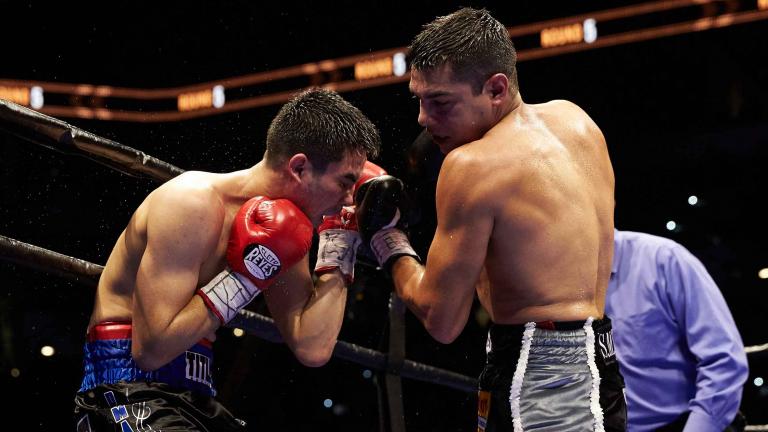 Omar Figueroa Jr.’s swollen face showed the wear after his 12-round slugfest with Antonio DeMarco in San Antonio on Saturday night. Although he won a unanimous decision to remain unbeaten, he took more punishment that he anticipated.

Antonio DeMarco announced his retirement in the ring after losing to Rances Barthelemy in June. In returning to take on Omar Figueroa Jr., he proved he had plenty of fight left in him.

Bring it on: Antonio DeMarco’s aggressive game plan has Omar Figueroa Jr. as happy as a kid on Christmas

Antonio DeMarco has vowed to stand and fight toe to toe with Omar Figueroa Jr. on Saturday. If that’s the case, Figueroa says he’ll be getting exactly what he wants, and just in time for the holidays.