After earning a silver medal at the 2012 Olympics, Mongolia native Tugstsogt Nyambayar is poised for a rapid ascent in the 126-pound division. Read Bio 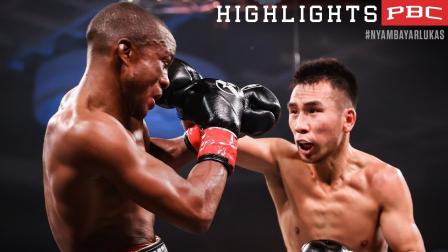 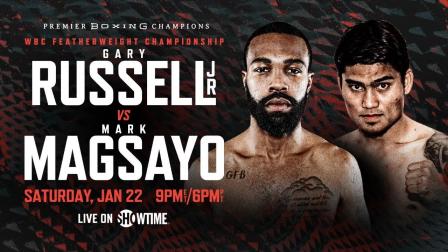 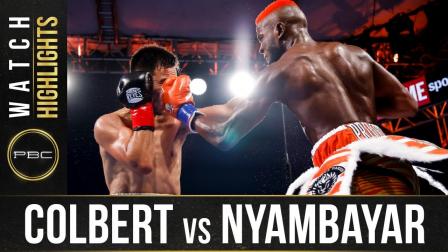 Colbert's career arc continues upward as he overcomes a stiff challenge from Nyambayar to pull away down the stretch and retain his interim 130-pound world title Saturday night on PBC on SHOWTIME.

With the victory, Lubin is now in line to face the winner of the Jermell Charlo-Jeison Rosario 154-pound blockbuster unification next Saturday, September 26, live on SHOWTIME PPV.

Gary Russell Jr. WINS against Tugstsogt Nyambayar by UD in Round 12 of 12

After earning a silver medal at the 2012 Olympics, Mongolia native Tugstsogt Nyambayar is poised for a rapid ascent in the 126-pound division in his search for a world title.

From Sandbags To Boxing Gloves

Tugstsogt Nyambayar fell in love with The Sweet Science as a six-year-old hitting sandbags and working the mitts with his grandfather.

“I wanted to be a boxer ever since I was a kid. I started watching all of the fights,” said Nyambayar “I have all of the tools. I bring all kinds of angles and I’m a pressure fighter. I can adjust to any kind of fight.”

Nicknamed “King Tug,” Nyambayar went 140-10 as an amateur. In 2009, he earned a silver medal in the world amateur championships as well as a bronze in the Asian championships. Nyambayar also earned a gold medal in the 2010 World University Games and then won an Olympic silver medal for Mongolia in the 2012 Olympics before leaving behind a family that included a young son and moving to Los Angeles in 2014.

Although he has idolized and been compared to eight-division champion Manny Pacquiao of the Philippines, Nyambayar remains his country’s best hope to become its second-ever world champion since Lakva Sim earned the WBA’s 135-pound title via fifth-round TKO of Miguel Callist, his third straight stoppage victory coming in April 2004.

“I’ve watched Lakva Sim’s fights several times. People want me to be like him. I think he’s a hero, and not just famous as a professional boxer. I’m a big hope for a world title for Mongolia, so I would like to become a world champion and bring a title back to Mongolia,” said Nyambayar.

“If I am able to bring a title back to Mongolia, that would be huge. That would be bigger than the medals I have won. So I think the Mongolian people will be happy and there will be a major celebration -- one of the biggest celebrations you could ever think of since there has been only one Mongolian champion, I want to become the best ever.”

At weights between 121 ¼ and 123 ¾ pounds, Nyambayar stopped his first four professional opponents in 2015; first-round knockouts of Gabriel Braxton (March) and Manuel Rubalcava (April), a third-round stoppage of Arturo Badilla (August) and one in the second round over Pedro Melo (December).

“I won a world amateur silver medal at the age of 17,” said Nyambayar.  “Then I won an Olympic silver medal when I was 20. No one else [from Mongolia] has done that.”

Nyambayar went 5-0 (4 KOs) over the course of 2016 and 2017. In May 2016, he stopped Juan Ruiz in four rounds. That was followed by a first-round TKO of Rafael Vazquez in July. Nyambayar closed out the year with a five round technical decision over German Meraz in December.

On February 25, 2017, Nyambayar kicked off the new year with a four knockdown, 10-round TKO over Jhon Gemeno. He would fight once more in 2017, a November eight-round unanimous decision over then-undefeated Harmonito Dela Torre in November.

On May 26, 2018, Nyambayar took on ex-champion Oscar Escandon at Beau Rivage Resort & Casino in Biloxi, Mississippi. Facing the toughest opponent of his career to date, Nyambayar delivered, dropping Escandon five times and stopping him in three rounds.

“Escandon was a good, tough fighter,” said Nyambayar. “But I wanted to make a statement showing the world that I’m ready to fight for a world title next against anybody at 126.”

In January 2019, Nyambayar, now 10-0 (9 KOs), took on another former champion in Claudio Marrero. The bout was a 126-pound eliminator for the right to face WBC champion Gary Russell Jr.

“It wasn’t my night [against Russell.] He was the man tonight. I didn’t do my work the way I was supposed to. I made a mistake by waiting for him during the fight.”

Nyambayar returned to the ring on September 19, 2020 versus Cobia Breedy. A much busier "King Tug" dropped the game Breedy once in the first, and again in the second to help him win a 12-round split decision.

“I knew it was a close fight, but I wasn’t thinking about the score,” said Nyambayar. “I was surprised it was a split decision, but I thought I did enough to get the win."

Unfortunately, Nayambayar suffered a setback in his next bout which took place on July 3, 2021 at Dignity Health Sports Park in Carson, California. Taking a fight against the ultra talented Chris Colbert on short notice, and moving up a division, Nyambayar fell short, losing a 12-round unanimous decision.

On January 22, 2022 Nyambayar and Namibia's Sakaria Lukas (25-1-1, 17 KOs) fought to a spirited split-decision draw after 10 rounds of super featherweight action.