Cuban heavyweight contender talks about what went wrong in his loss to Deontay Wilder, why he says he deserves an immediate rematch and how he plans to bounce back this Saturday when he faces Razvan Cojanu on Showtime. 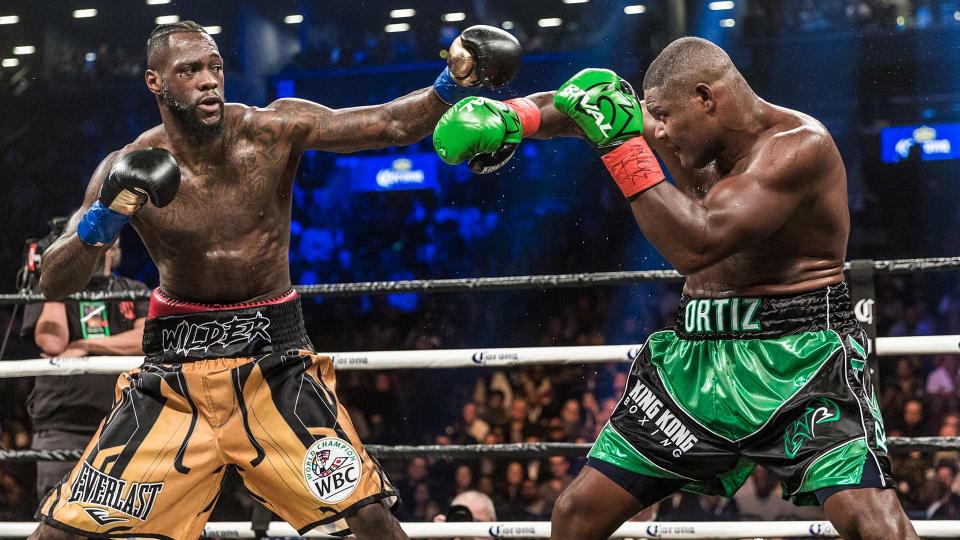 Luis Ortiz respects WBC heavyweight champion Deontay Wilder as a father, who’s daughter also is living with a health difficulty. However, the Cuban southpaw seeks a rematch following his three-knockdown, 10th-round TKO loss to “The Bronze Bomber” in March.

Where 10-year-old Lis Ortiz endures epidermolysis bullosa, a condition that causes the skin to be very fragile and to blister easily, Naieya Wilder thrives despite being born in 2005 with spina bifida, a congenital spine defect.

“The Real King Kong” (28-1, 24 KOs) is motivated to rebound against Razvan Cojanu (16-3, 9 KOs) in a July 28 10-rounder on Showtime (10 p.m. ET/7 p.m. PT) at Staples Center in Los Angeles. Ortiz staggered and nearly finished Wilder in the seventh, but was floored in the fifth and twice in the final round of Wilder’s seventh straight stoppage.

The 39-year-old Ortiz looks to defeat Cojanu, who lost his last fight in May 2017 by unanimous decision to New Zealand’s then-unbeaten world champion Joseph Parker.

How does this fight break down with Cojanu, who has gone the distance with Parker?

Cojanu is 100 percent going to pay for the anguish I’ve been feeling over the loss to Wilder, so the plan is to seek and destroy, doing damage behind intelligent boxing and taking as little punishment as possible.

He’s 6-foot-7, which seems like the standard among many heavyweights right now, but I will definitely end the fight with another knockout.

You respect Wilder given your daughters’ stories, right?

Regardless of wanting to do damage to each other in the ring, we’re both loving fathers at the end of the day and there is no ill will toward Wilder, whatsoever.

I told Wilder, “God bless our children,” who have nothing to do with what we do for a living. Our mutual respect should always be based on that.

How many times have you replayed your fight with Wilder?

I’ve seen the fight more than a dozen times and can tell you minute-by-minute, second-by-second what all of my mistakes were and where I went wrong.

That fight is still a knife in my heart. I’m so disgusted with it and I want a rematch to show everyone what I would do differently.

What would you do differently?

First of all, I believe that a rematch is merited, especially if Wilder doesn’t get the Anthony Joshua fight. I’m the only fighter who has hurt Wilder and nearly had him out.

There are a combination of things I would do differently, among them is to completely isolate myself, train harder and focus more.

Can you discuss the momentum-swinging fifth round, where, you’re on your toes, boxing and moving and backing up Wilder? Then a pair of right hands staggered and dropped you in the final 25 seconds.

The strategy was to attack Wilder, taking it to him, which is the only way to beat a world champion, and I was doing exactly what we had planned to do to that point.

Wilder won the fifth round, of course, but up until that point, he wasn’t doing much and we believe that we were winning the fight [The official judges cards had the bout even at 38-all entering the fifth.]

“ That fight is still a knife in my heart. I’m so disgusted with it and I want a rematch to show everyone what I would do differently. ” Heavyweight contender Luis Ortiz, on a rematch with Deontay Wilder

How close were you to finishing Wilder in the seventh after that straight left to the chin and several follow-up blows had him hanging on?

Round 7 was definitely an emotional round. My biggest mistake was that, once I hurt him with the shot, I was already visualizing myself as the WBC heavyweight champion of the world, and as the undisputed champion after knocking out Anthony Joshua. Rookie mistakes.

All of that flashed before my eyes, and then I obviously punched myself out. But even as I was punching, there are some things that I would have done differently with my shot selection.

Slowing down my punches, shortening them up, being more precise and not so much throwing the flurry of punches I was using.

Do you believe Wilder was inadvertently given extra recovery time while ringside doctors examined him in his corner before the eighth round?

That was absolutely an advantage for Wilder, but also for me as well, because that allowed me time to recover and to rejuvenate after having expended so much energy going for the knockout in the seventh.

How hurt were you in the 10th when Wilder twice dropped you with a pair of right hands — including an uppercut — and do you have any issues with the stoppage?

Wilder did not knock me out, even though he hit me with his best shots. I wasn’t unconscious and they didn’t take me out on a stretcher. It’s not my mentality to be rescued or saved in that way. It was purely a fatigue stoppage. I couldn’t continue because I was dead tired, so I’m not satisfied.

The more conditioned, and not the better man, won, because Wilder had no answer for me other than the one right hand in the fifth and capitalizing on my fatigue in the 10th. I would have preferred a more conclusive finish, me being knocked out with birdies fluttering around my head.

I would rather have Wilder knock my block off and have me knocked out cold. The better man did not win that night in the sense that I got tired. With a rematch opportunity, I can improve conditioning and tweak certain things, here and there, and Wilder will not stand a chance.

You have mentioned pre-fight distractions?

Leading up to the fight, I felt the commission’s medical team completely dropped the ball on my blood pressure testing. We were being monitored every hour by the doctors for a blood pressure issue from the weigh-in and beyond.

They initially took our blood pressure with an electronic wrist monitor, which was not as accurate as a manual cuff on the biceps. Even though we asked them to do it that way, they didn’t. I was in street clothes in the locker room until 9:30 that night without clarification or clearance whether or not we were fighting.

Wilder and his camp may have known that we were going to fight, but, on our part, we were not made aware of the intent to let us fight from around 3 p.m. in the afternoon until they signed off on the fight very late into the evening, which is obscene and absurd.

Being 39, and with Joshua and Wilder planning to fight, do you think age could be a factor given you could turn 40 before receiving a title shot?

I could be 50 and still beat these guys. They ain’t [better than me]. If my age is such a big deal, why isn’t Joshua calling me out?

Why isn’t Wilder giving me an immediate rematch? Why are all of these punks running from me? Obviously, they don’t want to fight and they’re all scared of me.

How does a fight go between you and Joshua?

I haven’t thought about Joshua since he avoided me a while back, but it’s a fight where you would see me enjoy beating the piss out of him for several rounds.

I see myself breaking down Joshua to the body and ripping his head off with right hooks and straight left hands over the course of eight rounds.

But at least Wilder put his money where his mouth is, stepped up and fought me. I’ve got zero respect for Joshua, who, at this point, is a complete punk hiding behind his puppeteer promoter [Eddie Hearn].

For a closer look at Luis Ortiz, check out his fighter page.

This Week on The PBC Podcast: David Benavidez Talks That Talk

Wilder Does it Again, Knocks Out Ortiz in Seven

The WBC World Heavyweight Champion ties Muhammad Ali on the heavyweight list for most consecutive title defenses as he delivers a scorching KO Saturday night on FOX Sports PBC PPV.

Fireworks are expected when two of the most explosive heavyweights in the world, WBC World Champion Deontay Wilder and dangerous Cuban Luis Ortiz, square off in an anticipated rematch Saturday night on FOX Sports PBC Pay-Per-View.