Abner Mares overcame a childhood marked by poverty and violence to become an Olympian, and then a four-time champion in three weight classes. Read Bio 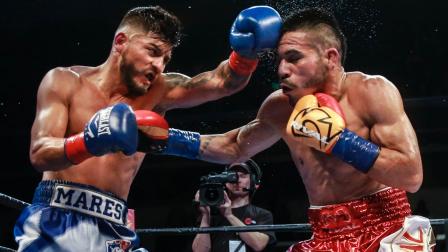 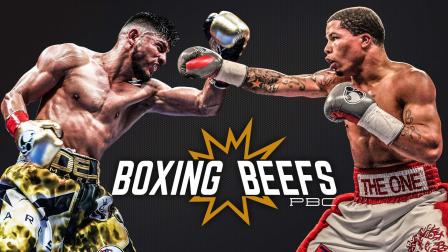 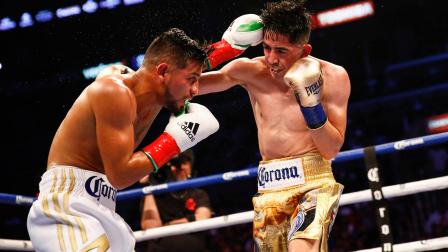 As he prepares to launch a new podcast and make a ring return, the former three-division world champion reflects on the events that led to depression and how he overcame it.

This Week on The PBC Podcast: Danny Garcia & Abner Mares

Two of the game’s best discuss how they’re passing time during the pandemic and what’s next for them once boxing resumes.

Mares’ childhood was tough, and it only made him tougher still in the ring. Born in Mexico before immigrating to California when he was 7, Mares’ youth was spent in poverty and gangs before he turned to boxing as a teenager. After an outstanding amateur career, the former Olympian has went on to win four world titles in three weight divisions.

The boxing ring can be brutal and unforgiving, a place where dreams can quickly become nightmares.

For Mares, though, it’s long been a sanctuary, an escape from even tougher environs: the streets on which he grew up.

Born in Guadalajara, Mexico, Mares and his family immigrated to the United States when he was 7 years old.

Mares, one of 11 siblings, came of age in Hawaiian Gardens, California, a small, hardscrabble town in Los Angeles County with a long history of gang warfare.

For a time, Mares got caught up in that lifestyle, his youth marked by poverty and a hand-to-mouth existence.

At age 15, Mares was sent back to Mexico by his father so he could pursue a spot on the Mexican Olympic boxing team.

Extremely lonely and homesick, Mares was convinced by his parents to stick it out.

"I am the person I am now because of everything I went through as a child," he told Yahoo! Sports in 2013. "All that, eating out of trash cans, being in a gang, sleeping on the floor because I had nothing, living on my own at 15, that made me who I am. I grew up fast. I had a different life, but it's all good.”

Mares soon was rewarded for his perseverance, earning the gold medal at the 2002 World Cadet Championships and the 2002 Central American and Caribbean Games.

He then won the silver medal at the 2003 Pan American Games and the 2004 World Junior Championships.

Mares represented Mexico at the 2004 Olympics, competing in the Athens Games at 119 pounds.

He was eliminated after one fight, though, losing a controversial 27-24 decision to Zsolt Bedak of Hungary, and ended his amateur career with a record of 112-8 with 84 knockouts.

Mares defeated Isidro Garcia in Tucson in September 2007 to improve his record to 14-0, stopping the former 112-pound world champion in seven rounds.

He won his next three fights before suffering an eye injury during training that required surgery.

Returning to the ring in May 2009, Mares defeated Jonathan Perez in six rounds in Las Vegas.

Mares got his first shot at a world title against unbeaten 118-pound champion Yonnhy Perez in Los Angeles in May 2010.

The bout ended in a 12-round majority draw, allowing Perez to retain his title, with one judge scoring it 115-113 in favor of Mares, while the other two judges had it at 114-114.

After defeating Vic Darchinyan in a 12-round split decision in December 2010, Mares got his second shot at a world championship at 118 pounds in August 2011.

This time, Mares was victorious, knocking down Joseph Agbeko in the first and 11th rounds en route to winning a 12-round majority decision in Las Vegas.

The two fighters met in a rematch in Anaheim, California, in December 2011, and again Mares emerged victorious, winning a 12-round unanimous decision to retain his title.

For Mares, winning a world championship was a culmination of the tough climb from the trials of his childhood, and it kicked off an 18-month run in which he would win world titles in three weight divisions.

“This shows I made it to something big, that I've done something good with my life,” Mares told the Los Angeles Times in 2012.

A champion at multiple weights

Mares moved up to 122 pounds to face Eric Morel for the vacant world championship in El Paso, Texas, in April 2012.

Mares entered the fight as an overwhelming favorite, and gained the title by winning a 12-round unanimous decision.

Mares defended his title against Anselmo Moreno in Los Angeles in November 2012, winning a 12-round unanimous decision.

He then moved up in weight again, challenging Daniel Ponce De Leon for his 126-pound world title in Las Vegas in May 2013.

Mares floored the champ in the second round before finishing him off in the ninth to become a three-division world champion and improve his record to 26-0-1.

Mares suffered his first pro defeat and lost his title in his next fight, getting KO’d in the first round by Jhonny Gonzalez in Carson, California, in August 2013.

He bounced back with two victories in 2014, winning a 10-round unanimous decision over Jonathan Oquendo in July before stopping Jose Ramirez in five rounds in December.

Mares was part of the first Premier Boxing Champions card, taking on Arturo Santos Reyes at the MGM Grand Garden Arena in Las Vegas on March 7, 2015, in a fight that aired on NBC Sports Network.

The former world champion won a 10-round unanimous decision in a hard-fought, back-and-forth battle.

Mares scored a second-round knockdown of Reyes to help win the fight by scores of 96-93, 98-91 and 99-90, and keep himself in contention for another shot at a world championship.

Mares gets his shot

That shot came 5 months later, when Mares and long-time friendly rival Leo Santa Cruz met in a highly-anticipated "Battle for Los Angeles." The two squared off in a PBC card aired on ESPN in front of a raucous hometown crowd at the Staples Center. In what would eventually be pegged as the 2015 PBC Fight of the Year, the two did not disappoint, throwing down over 12 brutal rounds, but Santa Cruz handed Mares just his second career defeat via Majority Decision.

Mares took some time off and re-evaluated some things in his career, and wouldn't return to the ring until more than a year later on December 10, 2016. With new trainer Robert Garcia in his corner, Mares got another shot at his fourth world title against Argentina's heavy-handed Jesus Cuellar. Under Garcia, Mares showed the elite-level boxing skills he'd displayed regularly as an amateur and early in his pro career, resisting the urge to brawl in the way he did with Santa Cruz. His consistent, patient work paid off, as he scored a late knockdown of Cuellar that helped lead the way to a Split Decision victory.

On October 14, 2017, he notched a 10-round technical decision over Andres Gutierrez at StubHub in Carson, California.

ANOTHER WAR WITH SANTA CRUZ

On June 9, 2018, Mares and Santa Cruz squared off again at Staples Center in a featherweight unification bout.

In front of 12,505 fans, the two went to war again, combining for 2,038 punches, seven more punches than the two combined to throw in their first fight. Santa Cruz landed 357 of 1,061 punches and Mares landed 226 of 997 in the rematch. In the end, Santa Cruz pounded out another thrilling victory, winning by 12-round unanimous decision.

Mares was expected to return on February 9, 2019, versus super featherweight champion Gervonta "Tank" Davis but an injury suffered during training camp forced him to pull out.

“I am the person I am now because of everything I went through as a child.”