With his twin brother’s victory and first world championship in the bank, Jermall Charlo entered the ring determined to make history in his title defense against Austin Trout: With a win, he and Jermell Charlo would hold 154-pound titles concurrently, becoming the first boxing twins to do so. 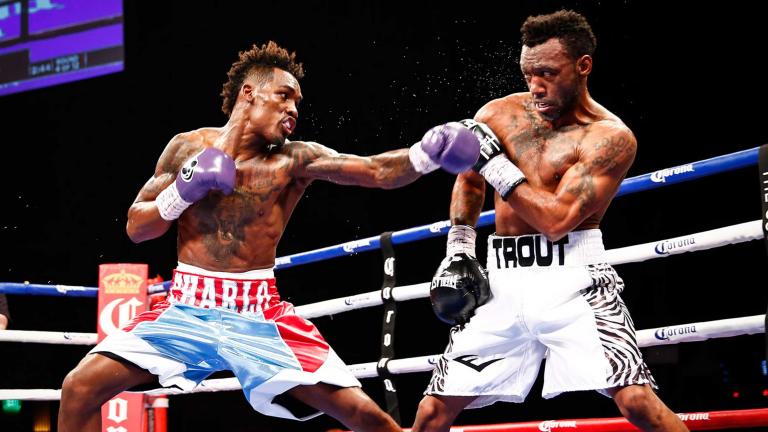 Jermall Charlo used his jab from the start to pave the way for big right hands against Austin Trout on Saturday in Las Vegas. (Stephanie Trapp/Mayweather Promotions)

Trout wasn’t about to make it easy.

A former 154-pound titleholder himself, Trout gave Jermall Charlo the toughest fight of his professional life, pushing the champ farther than he’s ever gone before. In the end, though, history was indeed made, as Charlo followed his brother’s eighth-round knockout of John Jackson by escaping with a hard-fought unanimous decision.

Charlo (24-0, 18 KOs) set the tone early by working behind his lightning-quick jab, which Trout (30-3, 17 KOs) was unable to time and consistently avoid. Because of that, Trout’s right eye began to swell as early as the second round before a cut next to the eye opened up down the stretch.

As he struggled to close the distance against his taller, longer 26-year-old opponent, Trout was left to attack the body in the early going, which he did with mixed results.

With his jab opening the door to powerful right hands, Charlo for the most part dominated the middle rounds. But that’s when the fight began to level out, as Charlo’s big rights landing on Trout’s chin were balanced out by the 30-year-old challenger tagging the champ when he lunged forward and lowered his head.

The intensity really picked up over the final four rounds, which the two fighters split on the scorecards. But Charlo’s work in the middle of the contest proved to be the difference as the Houston resident successfully defended his title for a second time.

About the only negative for Charlo—who entered the ring having stopped 16 of his previous 17 opponents—was he failed to deliver on trainer Ronnie Shields’ prediction that he would be the first man to knock out Trout. Indeed, the southpaw from Las Cruces, New Mexico, remained on his feet the entire night but saw his four-fight winning streak come to an end.

Jermell Charlo came to the ring Saturday night at STAPLES Center wearing a lion head, and left the ring with another good name on his ledger.