Dominic Breazeale gained a fifth-round stoppage to remain unbeaten when Amir Mansour was unable to continue because of an apparent fractured jaw.

Dominic Breazeale had vowed “fireworks from the opening bell, punch for punch, round for round” in advance of Saturday’s 10-round heavyweight clash with southpaw Amir Mansour at Staples Center in Los Angeles.

The 2012 U.S. Olympian’s prognostication came true—just not in the manner he expected. Despite significant advantages in height, reach and age, the 30-year-old Breazeale was outhustled and repeatedly rocked over the first two rounds by the 43-year-old Mansour.

Then in the third round, Breazeale was floored by a booming right hook to the head, and it looked like the 6-foot-7 boxer was destined for his first defeat.

But Breazeale finally picked things up in the fourth and rallied over the final minute of the fifth, matching Mansour blow for blow and badly hurting his 6-foot-1 opponent with a jarring left-uppercut, right-hand combination.

That two-punch assault appeared to damage Mansour’s jaw, and as the sixth round was about to begin, Mansour complained to his cornerman that he couldn’t close his mouth. When he refused to answer the bell for the sixth, referee Raul Caiz Sr. waved off the bout. 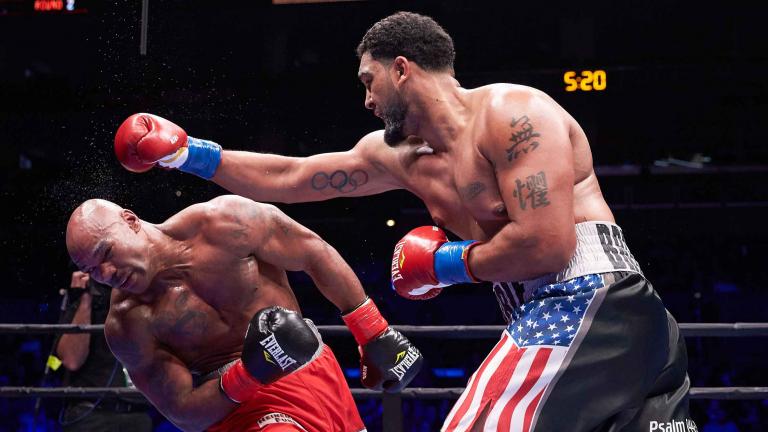 His Christmas Grinch'd by a canceled fight, Dominic Breazeale is ready to take it out on Amir Mansour

It wasn’t that a lump of coal was deposited in Dominic Breazeale's stocking. It was more like Santa used the thing as an air-sickness bag.