Rising star Sammy Vasquez kept his perfect record intact with a sixth-round TKO of Aron Martinez, who was unable to continue after Round 6.

An Army veteran who suffers from post-traumatic stress disorder, Sammy Vasquez (21-0, 15 KOs) believes that boxing is therapeutic for him, that it calms him in a way.

True to his words, Vasquez was a poised, relaxed presence as he dismantled an overwhelmed Aron Martinez (20-5-1, 4 KOs) at Los Angeles’ Staples Center on Saturday, winning by sixth-round TKO when Martinez was unable to continue because of an elbow injury.

With far superior hand speed and power, Vasquez completely controlled both the pace of the fight and the range at which it took place. The 29-year-old southpaw peppered Martinez with jabs early, then plastered him with straight left hands at will.

Martinez is normally a high-energy, come-forward mauler who likes to shrink the distance between he and his opponent and hammer away on the inside. But the 34-year-old Mexican was the opposite on this night, tentative, gun-shy and reluctant to lead.

Hard to blame Martinez: If he did attempt to get off first and initiate the action, he got blasted by rapid-fire combinations from the stronger, faster Vasquez.

Vasquez kept his hands low at times as if to lure Martinez in, but the latter seldom took the bait. Instead, Vasquez instead stalked down his opponent, rocking him to the head and body with both hands.

It didn’t help matters for Martinez that he apparently hurt his left elbow early in the fight, an injury that led to an early finish—Vasquez’s 10th stoppage victory in his past 12 contests. 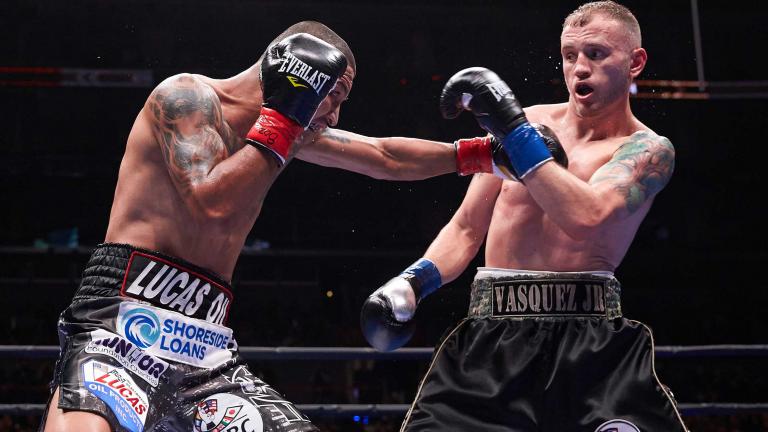 Sammy Vasquez dodges a jab from Aron Martinez during their 147-pound clash Saturday in L.A. Vasquez improved to 21-0 with a sixth-round stoppage. (Suzanne Teresa/Premier Boxing Champions)

He says the boxing ring is one of the only places he feels truly safe. His opponents can’t say the same.

A storybook year is about to have its pages set ablaze, so says the fireball on the other of the end of line.

There’s fighting fire with fire, and then there’s taking a flamethrower to a flicked Bic. This is how Sammy Vasquez used to carry himself in the ring, like the no-huddle offense incarnate, with leather in place of pigskin. Defense? That was as much an afterthought as a purity ring on prom night.