Robert Guerrero knew Danny Garcia is sometimes a slow starter in fights. So it’s not surprising that he came out firing at Staples Center in Los Angeles, hoping to score the quick strike.

For five rounds in the 147-pound title clash, “The Ghost” blasted away with body shots that kept Garcia on the defensive and fighting backward. But by the sixth, Garcia settled into a groove and drove home thunderous counter hooks that took some of the wind out of Guerrero’s sails.

Some, but not all.

Guerrero shook off a few punishing shots and kept on coming. In what was still a fight well within reach, Guerrero came back and took the 10th after Garcia dominated the middle rounds, putting the outcome of the bout once again in doubt.

The 12th proved to be the most thrilling round not only of the night but of a young 2016, as both fighters went all out, trading heavy punishment as the crowd jumped out of their seats.

Neither man could put the other one on the canvas, though. In the end, Garcia’s dominant middle rounds proved too much for Guerrero to overcome, as all three judges saw it 116-112 for the unbeaten Philadelphia native, who with the victory became a two-time world champ. 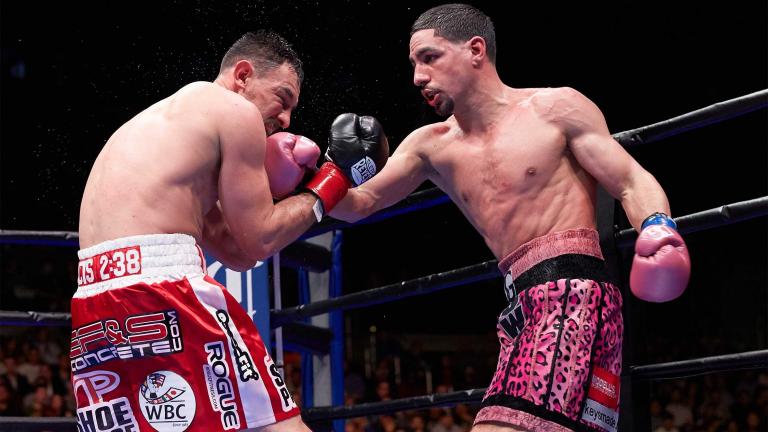 Presenting the 12 Rounds of Christmas: Round 6 (Garcia vs Guerrero)

Some rounds feature fireworks from the opening bell. Others take a little while to percolate, such as Round 6 of the world title fight between Danny Garcia and Robert Guerrero.

As Danny Garcia recovers, the newly crowned 147-pound champ mulls his next move

Right after Danny Garcia won his unanimous decision over Robert Guerrero on Saturday night in Los Angeles, Guerrero was adamant he wanted a rematch.

For five rounds, Robert Guerrero looked like a fighter who was younger, hungrier and sharper than Danny Garcia. After that, Garcia showed why he’s an undefeated world champion who dominated the 140-pound ranks, then made the right decision to move up.