Washington controlled the early rounds but Mansour battled back late, resulting in a split draw on the judges' scorecards.

Gerald Washington had an eight-inch reach advantage over Amir Mansour, and he fought like a man who was ready to exploit every fraction of it—at least for half of the 10-round bout.

Firing crisp jabs and sharp counters through the first half of their showdown at Little Creek Casino Resort, Washington kept Mansour well at bay through the first few stanzas—including picking Mansour off with a beautiful uppercut in the fourth.

But Mansour was a pit bull in the ring, going all-in for a high-volume attack that punished Washington to the body into the middle and late rounds.

Mansour's aggression seemed to slow the 6-foot-6 Washington, and the 43-year-old southpaw was able to work his way back into the fight.

Washington rallied in the ninth and 10th frames, using his length as he did in the early rounds.

In the end, the two fighters had to settle for a split draw—much to the chagrin of both—as judge Adalaide Byrd scored it 97-93 for Washington, judge Steve Morrow sided with Mansour, 96-94, and judge Pat Russell saw it as 95-95. 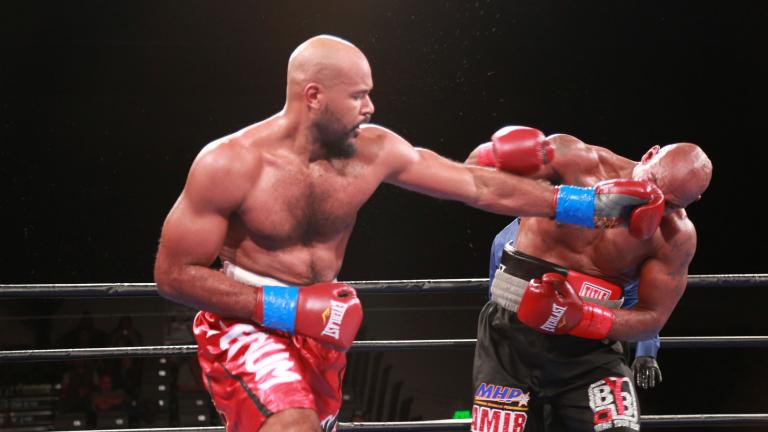 Gerald Washington deadlocks with Amir Mansour in 10-round heavyweight clash

He may be a nice fella in person, but Amir Mansour is a frightening dude to behold, with biceps that bulge like croquet balls stuffed into a gym sock and the perpetually agitated air of a man who woke up on the wrong side of a bed of nails. He looks like the kind of guy a dark alley would cross the street to avoid. All of this has Gerald Washington very, very stoked.

Why rugged heavyweight Gerald Washington brands himself a chicken

No man who steps into the ring to trade blows with another man qualifies as a chicken. And yet, that’s what Gerald Washington calls himself. To be fair, though, it’s a pretty badass bird.