Ever since dropping consecutive fights in 2013, Austin Trout has been on a mission to re-establish himself as one of the top contenders in the highly competitive 154-pound division.

After a bit of a slow start, Trout (30-2, 17 KOs) put on a dominating performance at the Hollywood Palladium in Los Angeles, ultimately using a vicious three-punch assault to the body to score a sixth-round knockout of Joey Hernandez.

It was Trout’s fourth consecutive victory and third straight knockout, and it came with a bizarre twist: Early in the fourth round, Hernandez—seemingly irritated by what he thought was a low blow to his hip—body-slammed Trout to the canvas.

After a brief delay in which referee Jack Reiss scolded Hernandez (24-4-1, 14 KOs) and ordered a one-point deduction, Trout picked up the pace and began breaking down his opponent.

In the fifth, Trout—who won every round on all three judges’ scorecards—started putting on a clinic, not only connecting at will but also slipping virtually every punch Hernandez threw.

Then as the sixth round came to a close, the 29-year-old New Mexico native used one final left hook to the ribs that sent Hernandez crumbling to the canvas.

When Hernandez failed to beat the 10 count, Trout had his 30th career victory—one that should put the former 154-pound champ right back in the title mix. 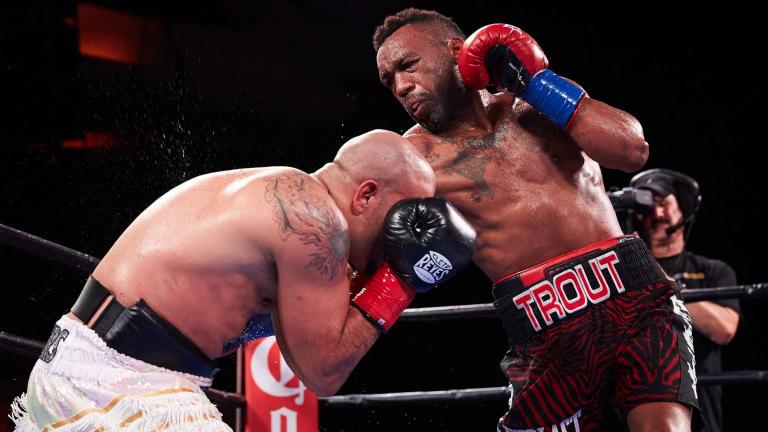 Austin Trout used a barrage of body shots to wear down Joey Hernandez before finishing him off at the end of the sixth round. (Suzanne Teresa/Premier Boxing Champions)

Austin Trout has aspirations to become a ringside analyst once his fighting days are over. Judging by the way things are going for him in the ring right now, that second career will have to wait for quite some time.

The last time Austin Trout faced a fellow southpaw, it was Erislandy Lara, the Cuban technician who made for a long, frustrating night for the New Mexico native.

Austin Trout gauges the distance between winning and losing

Last time out, Austin Trout caught Luis Galarza with a right in the seventh round. It was a stiff shot with some mustard on it, and it sent Galarza bouncing from one side of the ropes to another. It looked like he got clobbered by the Hulk the way he turned into a human pinball.