The fight ends in a technical draw after six rounds due to a cut above Jorge Lara's eye caused earlier in the bout by an accidental headbutt with Jesus Rojas. All three judges scored the fight 57-57.

For two rounds, Jorge Lara was in complete control of his 126-pound clash against once-beaten Jesus Rojas.

He pressed the action, landed clean shots to the head and body, and easily absorbed what little punishment Rojas dished out.

Then, with one clash of heads midway through the third round, everything turned.

Cut over his left eye by a headbutt that referee Jack Reiss ruled accidental, the unbeaten Lara suddenly struggled to hit his target, and Rojas turned into the aggressor, repeatedly attacking the eye with his jab.

At the end of the sixth round, with Lara unable to continue because of impaired vision, Reiss called an end to the bout. The scheduled 10-rounder went to the scorecards, with all three judges scoring the fight 57-57 for a technical draw.

“I’m very upset with the way this went,” he said. “Rojas is a dirty fighter. I came to fight and show people what this sport is all about. My eye kept getting worse and worse as the fight went on, and there was no way I could continue.” 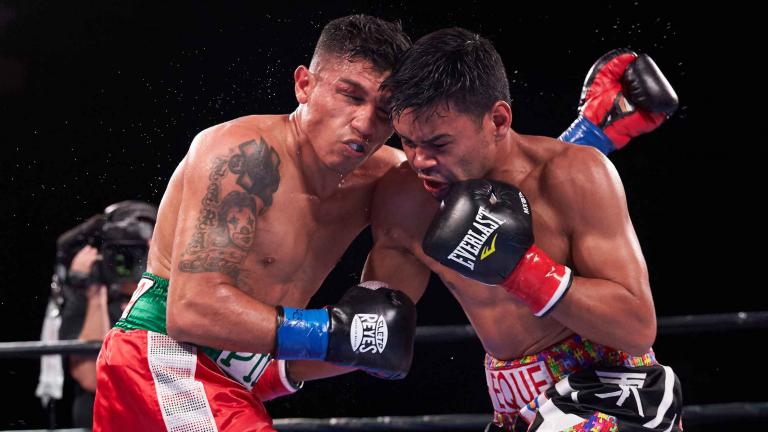 Jorge Lara, left, suffered a cut over his right eye in the third round of his clash with Jesus Rojas, resulting in the fight being stopped after six rounds and scored a technical draw. (Suzanne Teresa/Premier Boxing Champions)

Austin Trout has aspirations to become a ringside analyst once his fighting days are over. Judging by the way things are going for him in the ring right now, that second career will have to wait for quite some time.

Jorge Lara and Ulises Solis are separated in age by 10 years but share a similar past, having been raised in poverty a stone’s throw from one another in Guadalajara, Jalisco, Mexico.

Jorge Lara fights as if his life depends on it. Because it has.