Injuries have slowed the progress of Travis Kauffman, but the talented heavyweight is now ready to turn “My Time” into more than a nickname. Read Bio 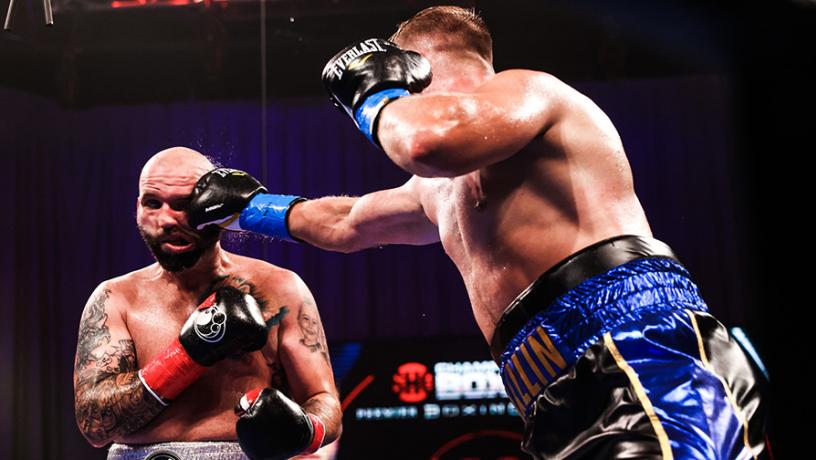 Wallin defeated Kauffman by way of RD5 TKO in their 10RD heavyweight showdown. 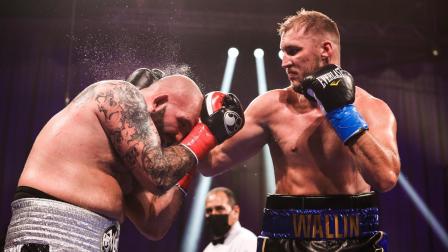 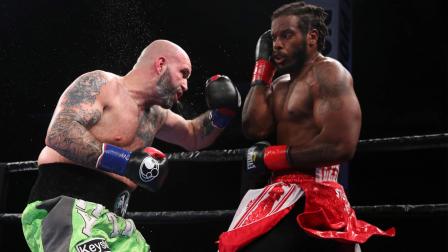 Two hungry heavyweights from different paths throw down tomorrow on Showtime PPV in their quest to reach a similar goal.

Chris Arreola Travis Kauffman by NC in Round 12 of 12

Long-time heavyweight contender Travis Kauffman has overcome a multitude of obstacles and remains a formidable threat to any top big man.

Travis Kauffman hated boxing as a youngster because it displaced time with his father, Marshall.

“I was a single father with my own gym the first time I took an eight-year-old Travis to the gym. There’s a picture of him wearing a Shaquille O'Neal shirt at the gym,” said Marshall Kauffman. “Travis had a couple of exhibition fights, but then, he stopped boxing altogether. His reasoning was he hated boxing because it took his Dad away from him.”

But that changed when a 14-year-old Travis sought revenge on another boy.

“He said ‘I want revenge on that kid. I want payback.’ So he entered the Golden Gloves, beat that kid, and the rest is history.”

The 6-foot-3 Kauffman compiled an amateur record of 52-12 as a super heavyweight, capturing the Police Athletic League (PAL) Nationals in 2004.

Kauffman had a tremendous 2005, earning a No. 1 national ranking for winning the U.S. A. Championships as well as the Jose Tito Aponte Tournament in Puerto Rico and a gold medal at the USA versus Azerbaijan Tournament, defeating an Olympic bronze medal winner in the latter.

“My Time” was 7-0 (5 KOs) over his initial pro fights of 2006. His first three bouts ended in stoppages in the second, first and first rounds over Jerome Boyer (January), Benny Bland (February) and Robert Bell (March) followed by a four-round unanimous decision over Mike Miller that was separated by 13 days from his triumph over Bell.

There was also a six-round unanimous decision over David Cleage (May) preceding first- and second-round knockouts of James McCloskey (August) and Allen Prescott (September).

Kauffman combined to go 7-0 (6 KOs) over the course of 2007 and 2008, the former comprising an eight-round unanimous decision over Dan Whetzel (April) which followed third- and second-round knockouts of Joe Stofle and Kevin Hood in March that were separated by 20 days.

The next year began with a 45-second TKO of Octavius Smith (June) followed by second-, first- and third-round stoppages of Travis Fulton (July), Josh Gutcher (September) and Malachy Farrell (December).

Kauffman rolled into 2009 with first-round KOs of Cliff Couser (February) and William Shahan (August) as well as those in the second and third rounds over Ken Murphy (January) and Levin Castillo (May).

Kauffman won thrice more in 2010 comprising a six-round unanimous decision over Mike Miller (February), a second-round TKO of Chris Koval (May) and a disqualification victory over Ross Thompson (December).

There was one victory each in 2011 and 2012 -- both in August of those years -- over Sean Williams (first-round TKO) and Charles Davis, the latter being a rain-shortened seven-round decision.

A one-fight 2014 produced Kauffman’s first 10-round victory, a near-shutout unanimous decision over southpaw Vincent Thompson, who entered at 13-2 (2 KOs).

Entering at 36-4-1 (31 KOs), Arreola was originally awarded a split decision before the result was changed to a no decision for his failed post-fight drug test.

“That fight [Arreola] changed my life financially—it was the most money I ever made in my career,” said Kauffman, who rebounded in September 2016 with a second-round TKO of Josh Gormley. “But it also hurt me because had the judges given the right decision, I would’ve [gotten] bigger opportunities. But real fighters bounce back.”

Kauffman is 1-2 in his last three fights comprising a majority decision loss to left-handed Amir Mansour (March 2017) and, in 2018, a majority decision over late replacement Scott Alexander (June) followed by a courageous three-knockdown, 10th-round stoppage loss to Cuban southpaw Luis Ortiz (December), a former title challenger who rose to 30-1 (26 KOs).

“I was at a point in my life when we got the call [to fight Ortiz], where I wasn’t sure what I was going to do with my career. I’m a single father... so fighting once a year for me wasn’t cutting it,” said Kauffman, who swapped first-round knockdowns with Alexander, who entered at 14-2-2 (8 KOs).

“I was at the point of walking away if a big opportunity didn’t come up. I got on my hands and knees, wept and asked God if he no longer wanted me to fight, and if so, to just show me another way to provide for my kids...I promise you the very next day, my phone rang to fight Ortiz.”

In March 2020, Kauffman contracted COVID-19. “It was very scary,” Kauffman told Ringtv.com. “I kind of figured that I had it. I was out recently a few weeks ago in a social place, and someone there had it. Last week, I got a sore throat, I started feeling achy. My temperature was over 100. But once you’re told you have it, that’s when it becomes real.

On Saturday, August 15, Kauffman took on smooth southpaw Otto Wallin of Sweden in a 10-round battle on PBC on SHOWTIME Championship Boxing.

Kauffman hoped to get back on track but it wasn't to be. Wallin recorded a TKO at 2:32 of the fifth round when Kauffman, who re-tore his left labrum at the start of the fifth, was unable to lift his arm. Referee Michael Ortega signaled the end of the fight.

Afterward, Kauffman announced he was retiring from boxing, just days ahead of his 35th birthday.

“I tore my left labrum getting ready for the [Luis] Ortiz fight,” Kauffman said. “Like a dummy, I waited five months to have surgery on it after the Ortiz fight [December of 2018]. I started feeling better and was going to do a tune-up fight in March, but then COVID happened. This opportunity came up and I didn’t want to pass it up and I felt good. In the first round I hurt it. I felt it, but then it went away and I thought maybe it’s just my mind and it went away. Then in the fifth round I heard it and that was it. It was torn again.

“I’m done. I’m retiring. I have kids. I’ve been doing this a long time,” Kauffman said.