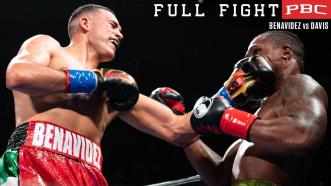 (Nov. 13, 2021) Two-Time World Champion David “El Bandera Roja” Benavídez remains undefeated in his homecoming return after a dominating seventh-round stoppage against 168-pound contender Kyrone Davis in their headlining super middleweight showdown. The 24-year-old Benavídez (25-0, 22 KOs) displayed a full arsenal of punches to dispatch a valiant effort from Davis (16-3-1, 6 KOs), who stepped in to fight the WBC’s No. 1 super middleweight contender on just two weeks’ notice. Davis showed incredible heart and guts, taking extreme amounts of punishment throughout the fight but never hit the canvas and no matter how many punches he was hit with, he always returned the fire. Davis’ trainer, Stephen “Breadman” Edwards, put an end to the punishment at :48 of round number seven when he threw in the towel. Watch the stoppage HERE: https://twitter.com/ShowtimeBoxing/status/1459749566018957313 “That was a great performance on my end,” Benavídez told SHOWTIME’s Jim Gray following the stoppage. “A lot of courage by Kyrone. A lot of respect to him and his team. He’s a tough dude. I came out here to give the fans a good fight and we both left it all out in the ring.” With November 13 officially being named “David Benavídez Day” in Phoenix, the boisterous crowd at Footprint Center urged their hometown hero on with every punch. Benavídez landed 137 of 258 power punches (51 percent) and targeted Davis’ body throughout the fight. He connected on 50 body punches, 45 of which were power punches. “It was tough but the thing about me is that I have so much conditioning that I’m going to keep going until he eventually stops,” Benavídez continued. “That’s what eventually happens. They tend to give up. I know that I don’t have that one-punch knockout power but I’m going to be ready to get you every single round.” The 27-year-old Davis played his role in the crowd-pleasing main event and earned the respect and admiration of everybody watching. “I’m a little disappointed,” Davis said. “I wish I could have pulled out the victory. I don’t like losing. I came in on two weeks’ notice. Shame on (Jose) Uzcategui for being on steroids. I had to come in on short notice but I fought like a warrior. I’m living my dream. I love coming out here and putting on a great show. Fighting is in my blood. I was raised like this.” With the unbeaten streak to start his career still intact, Benavídez, the former two-time super middleweight champion, now has his sights set on a mega-fight at 168 pounds. “Everybody wants to see me against Canelo, right? I don’t care what his assessment of my fight is but they keep putting these contenders in front of me. My last fight was a WBC Title Eliminator and that’s why I’m here holding my belts. They need to give me the opportunity. I’ll go through anybody. Whoever they want me to go through. If (Jermall) Charlo wants it, he can get it too. But he doesn’t want to get in the ring with me.” #DavidBenavidez #KyroneDavis #BenavidezDavis Visit PremierBoxingChampions.com for more info. SIGN UP FOR FIGHT ALERTS: https://pbcham.ps/FightAlerts FOLLOW US: https://twitter.com/premierboxing https://instagram.com/premierboxing https://www.facebook.com/premierboxingchampions 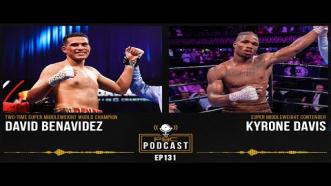 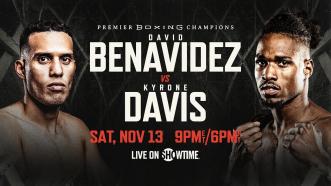 Unbeaten two-time world champion David “El Bandera Roja” Benavídez squares off against super middleweight contender Kyrone Davis in a super middleweight title eliminator as Benavídez returns to his hometown of Phoenix for the first time in six years in the SHOWTIME main event on Saturday, November 13 in a Premier Boxing Champions event from Footprint Center – home of the Phoenix Suns and Mercury. The SHOWTIME CHAMPIONSHIP BOXING® telecast begins at 9 p.m. ET/6 p.m. PT and will feature the much-awaited return of longtime contender José Benavídez, the older brother of David Benavídez, facing Argentina’s Francisco Emanuel Torres in a 10-round super welterweight bout. 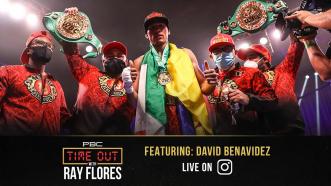 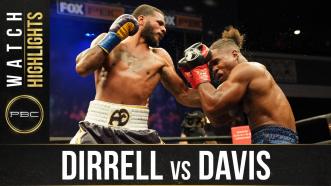 Anthony "The Dog" Dirrell and Kyrone "Shut It Down" Davis fought to a split decision draw in their 12-round super middleweight title eliminator bout on February 27, 2021, live on FOX from the Shrine Auditorium and Expo Hall in Los Angeles, CA. 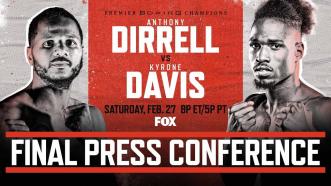 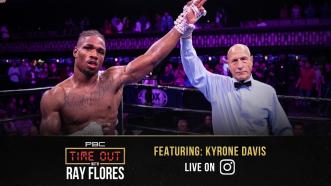 Kyrone "Shut It Down" Davis joins PBC Host and Announcer Ray Flores to preview his upcoming super middleweight throwdown with Anthony "The Dog" Dirrell on February 27, 2021, live on FOX. 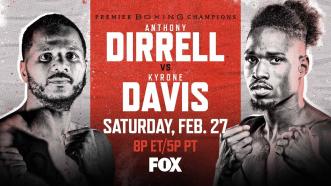