Philadelphian Julian “J-Rock” Williams proved he was as tough as his Philly roots—working all the way to the top of the 154-pound division become a unified world champion. Read Bio 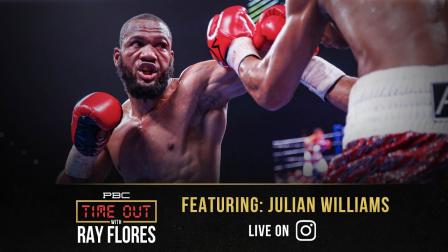 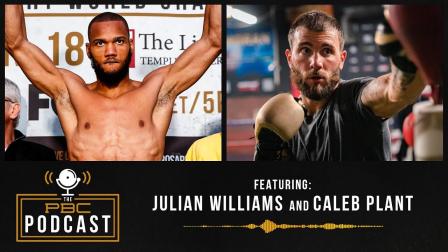 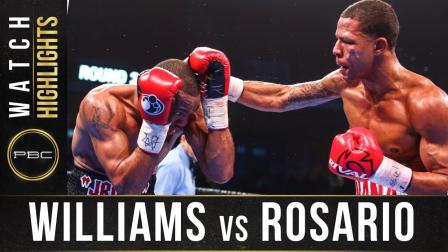 This Week on The PBC Podcast: Caleb Plant & Julian Williams

Two of the world's best are eager to get back in the ring and lay claim to the top spot in their respective divisions.

Julian Williams WINS against Brian Mendoza by in Round of 10

Philadelphia has a rich boxing history, with the City of Brotherly Love producing dozens of world champions in the sport. Julian “J-Rock” Williams is adding to that legacy, becoming the unified super welterweight world champion and remaining one of the best fighters in that talent-laden division.

Another Philly fighter is born

Williams initially was into basketball as a kid, but he began boxing at the age of 12 after talking to a fighter who he saw running every day. That meeting led Williams to visit the gym, where he soon began training and competing in amateur bouts.

“I stepped in the ring and I knew I was going to be a champion. Right there, I knew I wanted to box,” Williams told MaxBoxing.com in 2014. “I can’t explain it. It was just a feeling when I got in the ring that this is what I wanted to do and I’ve been boxing ever since.”

He won the 2005 Silver Golden Gloves Regional title at 15 years old, then the Junior Olympic Regionals the following year, but he couldn’t break through on the national level. Williams began working in 2007 with trainer Stephen “Breadman” Edwards, who encouraged the fighter to get serious about his training and diet.

Competing at 152 pounds, Williams lost to Errol Spence Jr. in the 2009 U.S. National Championships, and then to Miroslav Lokes at the 2009 National Golden Gloves. He then decided to turn professional, ending his amateur career with a record of 77-10.

A knockout from the start

Under the guidance of Edwards, Williams honed his ring skills as began his climb within the 154-pound division. After going 4-0-1 in five fights in 2011, Williams was less active in 2012, winning a unanimous decision over Hector Rosario in April before gaining a seventh-round TKO of Jonel Tapia in November.

Williams increased his profile in 2013 with bouts against five veteran opponents with a combined record of 105-18-7. After earning third-round stoppages of both Jeremiah Wiggins and Dashon Johnson early in the year, Williams then won an eight-round unanimous decision over former 154-pound world champion Joachim Alcine in Brooklyn, New York, in June.

Williams’ year was not without heartbreak, though, as his mother died in August, one month before he took on unbeaten Hugo Centeno Jr. in Las Vegas. The fight ended in a no contest when an early accidental clash of heads resulted in Centeno being cut and the bout being stopped.

Williams got back into the ring in December, when he stopped veteran Orlando Lora in the third round to improve to 14-0-1.

Williams continued his tear through the division in 2014. In March, he dropped former world title contender Freddy Hernandez with a counter right to the head in the opening minute of their bout in Boston before finishing him off with a left cross to the head in the third round.

He then scored an eighth-round KO of tough-nosed veteran Michael Medina in Montreal in May with a pinpoint series of punches.

In a battle of undefeated prospects in September 2014, Williams pitched a shutout on all three judges’ scorecards over eight rounds in Las Vegas to defeat Eliezer Gonzalez, who was 14-0 entering the fight.

Williams wrapped up 2014 with an eighth-round TKO of Jamar Freeman in Shelton, Washington, in December.

He stepped up his pursuit of a world title in April 2015, when he won a 10-round unanimous decision over seasoned southpaw Joey Hernandez in Quebec City. He then earned a sixth-round TKO over Arman Ovsepyan in Birmingham, Alabama, in June 2015 to run his record to 20-0-1.

A World Title Shot and a Lesson Learned

Williams was dropped in the first by a hard, straight left from Charlo. Undeterred, he found his footing in the second and began controlling the action, landing sharp counters on the aggressive champion.

The see-saw action continued until midway through the fifth, when a momentary defensive lapse allowed Charlo to land a big right uppercut, dropping Williams a second time. He gamely rose to his feet but the ensuing combination dropped him again, forcing the fight’s stoppage.

"I just got caught. He just caught me with a shot," Williams said. "All I wanted to do is win."

Williams returned to his winning ways in his next bout, a seventh-round TKO over Joshua Conley in June 2017.

The victory set up a showdown versus former world champion Ishe Smith in November 2017. Williams’ skillset proved too much for Smith to overcome. The Philadelphia native cruised to a wide 10-round unanimous decision, serving notice to the boxing world that he was still an elite fighter.

In April 2018, Williams took on the streaking Nathaniel Gallimore in a classic grudge match. Gallimore made several big claims in the days leading up to the IBF title eliminator bout. Once the first bell rang, “J-Rock” let his fists do the talking. Williams used his superior boxing and counterpunching skills to keep Gallimore off-balance, on his way to 12-round majority decision.

The win set up a showdown versus WBA and IBF World Super Welterweight Champion “Swift” Jarrett Hurd on Saturday, May 11, 2019, at the EagleBank Arena in Fairfax, Virginia, live on PBC on FOX.

Hurd, who hailed from neighboring Accokeek, Maryland, was a decisive favorite to retain his belts and remain undefeated. Williams, however, had an eye on redemption. This was his second chance at a world title, possibly his last.

Williams delivered his performance on the biggest stage of his career, dropping the champ in the second round and then proceeding to outbox and outbrawl Hurd in one of the year’s best bouts. After 12 rounds, all three judges saw it in Williams’ favor, by scores 116-111, 115-112, 115, 112. Williams was now the new unified 154-pound world champion.

"I am just overwhelmed,” Williams said. “This is such a great feeling. I outclassed him. I am one of the best fighters in the world. Maybe I wasn't ready for the title the first time I got the shot (against Jermall Charlo in 2016). I took the loss. I took it like a man and the whole world doubted me.”

On Saturday, January 18, Williams returned to his hometown of Philadelphia, taking on the dangerous Jeison Rosario at the Liacouras Center, live on FOX PBC Fight Night.

However, a victory wasn't meant to be as Rosario scored a huge upset, stopping Williams in five.

“I wasn’t surprised he was so good,” Williams said. “I told everybody he’s a real fighter. I have to accept it. The cut blurred my vision a little bit but it wasn’t the reason why I lost. He was the better fighter tonight. We’ve got a rematch clause. I’ll see him again soon. I’ll be back.”

Williams returned to the ring on October 9, 2021, losing a hotly-contested split decision to Vladimir Hernandez at T-Mobile Arena in Las Vegas. Hernández won on two cards by scores of 97-93 and 96-94 respectively, while a third card read 96-94 for Williams.

“My actions will speak louder than my words.”