Knockout artist Jonathan Guzman dropped Danny Aquino twice in the second round and finished him off in the ninth to improve to 20-0, all by knockout.

Jonathan Guzman not only improved to 20-0 with 20 knockouts with a ninth-round stoppage of Danny Aquino on Saturday night, but the hammer-fisted fighter demonstrated veteran poise and the ability to be a boxer-puncher.

He also demonstrated incredible pain tolerance, fighting with two broken hands after the second round, according to his promoter, Sampson Lewkowicz.

Guzman floored Aquino twice in the second round and counter-punched beautifully into the ninth, finally finishing his opponent with a head-swiveling right hand followed by a left uppercut for a technical knockout in a 122-pound clash at Lowell Memorial Auditorium in Lowell, Massachusetts.

After never having to fight past the fifth round in any of his previous contests, Guzman (20-0, 20 KOs) demonstrated solid stamina—even through it appeared the 26-year-old from the Dominican Republic would have another quick night after registering second-round knockdowns with his left hook and right hand, respectively.

After the initial knockdown at the 2:07 mark, Aquino (17-3, 10 KOs) rose on stable legs before referee Jackie Morrell reached the count of eight. Aquino went down yet again with 13 seconds remaining in the round from a left-hook, right-hand combination, yet he made it to his feet right before the bell sounded.

Guzman boxed well from the third round on, setting traps off counters, occasionally dangling his hands by his side starting in the sixth, and splitting Aquino’s guard—and his wild punches—with crisp counters of his own.

The end officially came at 1:19 of the ninth, with Guzman connecting with a strong straight right hand followed by two misses and a crunching left uppercut just as Aquino was on the way down.

It was the first time the 25-year-old from Mexico had ever been stopped. 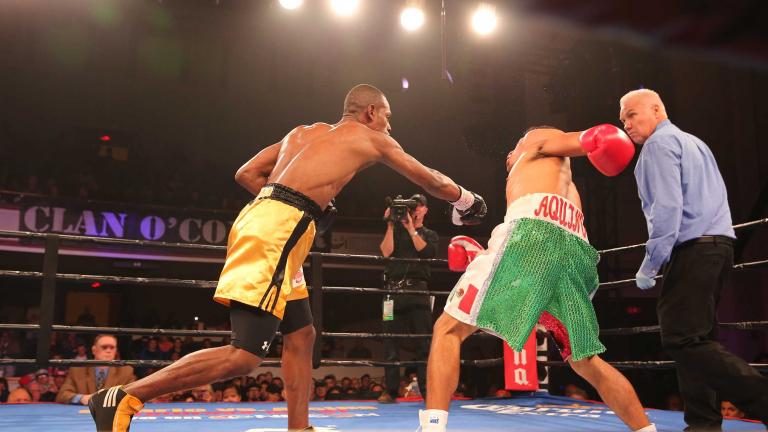 Jonathan Guzman connects with a big right hand against Danny Aquino on Saturday in Lowell, Massachusetts. Guzman scored a ninth-round TKO to improve to 20-0, all by knockout. (Joey Sylvester/Premier Boxing Champions)

Danny O’Connor expected to gain revenge over Gabriel Bracero on Saturday, and for a number of good reasons.

Jonathan Guzman provides a better life for his family, one jaw-rattling knockout at a time

Jonathan Guzman’s ritual has been the same before each of his professional fights: He leaves his wife, Carolina, and their three young sons in the Dominican Republic, heads to America for a training camp lasting from six to eight weeks, then returns home within days of knocking out his opponent.

Bombs Away: Unbeaten 122-pound contender Jonathan Guzman may be small, but he packs a big punch

Jonathan Guzman was lingering in the wings at Agganis Arena in Boston back in May, waiting his turn to close the show against Christian Esquivel, a former 122-pound title contender who would represent the unbeaten Dominican’s most difficult obstacle to date.