Frenchman Karim Guerfi roared back from an early knockdown in his U.S. debut and won a 10-round unanimous decision over Alejandro Gonzalez Jr., who injured his hand in the first round.

It was all about the hands as the fast fists of Karim Guerfi trumped a wounded Alejandro Gonzalez Jr. in an upset win at Austin City Music Hall in Austin, Texas.

Although Gonzalez dropped Guerfi in Round 1 with a punishing liver shot to gain the early advantage, he hurt his right hand shortly thereafter, as he told his corner following the round.

From there, Guerfi, making his U.S. debut, didn’t just flip the script, the 28-year-old Frenchman rolled the thing up and bludgeoned Gonzalez into submission with it.

After injuring his right hand, Gonzalez began loading up on his left, but Guerfi was able to successfully counter his opponent’s one-dimensional attack. Gonzalez continued to fire off his right intermittently, but his timing was off and his punches lacked zing.

Although Gonzalez still pressed forward gamely throughout the 10-round bout, he lacked the firepower to muster much of an attack as Guerfi pulled away to win a unanimous decision (97-92, 96-93, 95-94). 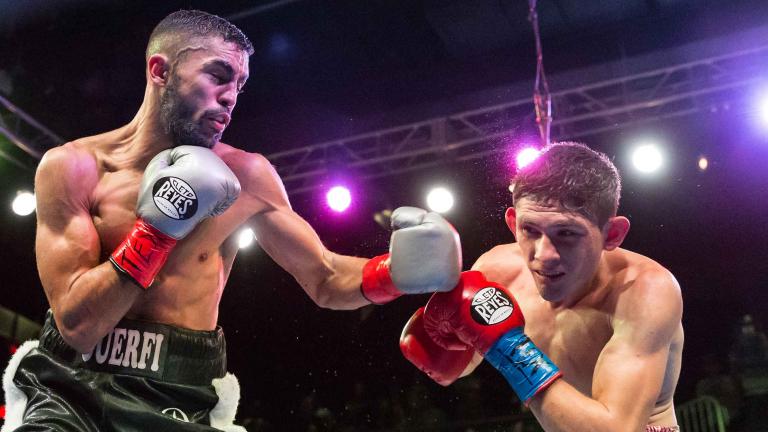 Karim Guerfi was quicker to the punch throughout the fight as he earned a 10-round unanimous decision over Alejandro Gonzalez Jr. in Austin, Texas. (Josh Jordan/Premier Boxing Champions)

He had him. Had him dead to rights. Alejandro Gonzalez Jr., the virtually unknown-outside-of-Mexico son of a former champion, had reigning titlist Carl Frampton down twice in the first round.

Alejandro Gonzalez Jr. isn’t the first “Cobrita.” That honor goes to his father.