Cuban amateur standout David Morrell Jr. is on a fast track to becoming world champion, following a long-line of great fighters from his country. Read Bio 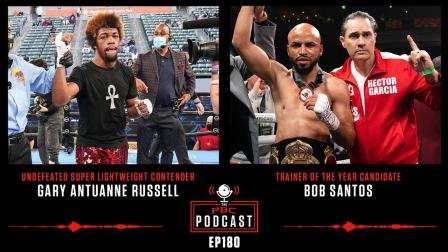 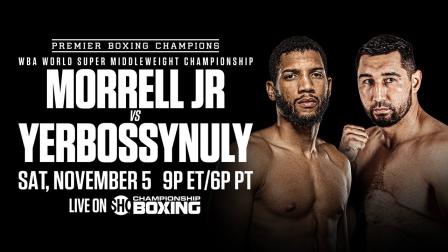 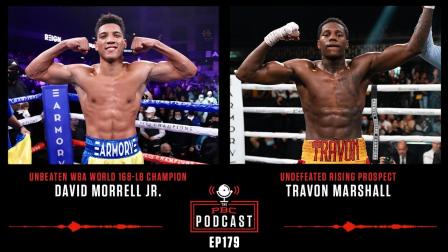 Undefeated Super Middleweight Champion David Morrell Jr. is primed for stardom but must first get past a fellow unbeaten fighter in dangerous heavy hitter Aidos Yerbossynuly Saturday night on SHOWTIME.

David Morrell Jr. WINS against Aidos Yerbossynuly by KO in Round 12 of 12

David Morrell Jr. WINS against Alantez Fox by in Round 4 of 12

David Morrell Jr. WINS against Mario Cazares by KO in Round 1 of 12

David Morrell Jr. WINS against Mike Gavronski by KO in Round 3 of 10

David Morrell Jr. WINS against Lennox Allen by UD in Round 12 of 12

Unbeaten super middleweight David Morrell Jr. is proof that the future is now. The well-schooled, heavy-handed Morrell is widely considered boxing's next star and pound for pound great.

Osvary David Morrell Gutierrez Jr. learned to fight in the streets of Santa Clara, Cuba, where he and other youth battled one another in makeshift boxing rings they crafted.

“I had to prove myself doing that up until the time I was about eight years old,” said Morrell, who was born into poverty before he began to use pugilism as an escape. “If you couldn’t fight in the streets, you couldn’t go into any boxing gym. I was able to do that starting at the age of 9.

A 6-foot-1 southpaw, Morrell cemented himself as an international star with an exemplary 135-2 amateur record. His lone setbacks were to countryman Julio Cesar la Cruz, who won an Olympic gold medal, and Canada’s Harley-David O’Reilly, a loss which was later avenged.

Morrell was a 178-pound runner-up at the Cuban National Championships in 2016, a champion in the same weight in that event in 2017, and a Gold Medalist at 178 pounds in the 2018 India Open International Tournament.

Morrell recalled the most painful day of his life: It was three years ago at 5 a.m. that he kissed his mother, Betty, goodbye prior to boarding a boat from Santa Clara, Cuba, for his defection to America.

“The worst thing for me was leaving my family, my mom, she was everything and did everything for me. I was very babied by her. Once I left her, I had to grow up real fast. It was not easy leaving her and my family. I never even got a chance to say goodbye to my little brother, Rafael,” said Morrell, who was wearing only a pair of jeans, a t-shirt, sneakers and a light windbreaker.

A New Home, The Same Results

Morrell began working with the father-son tandem of Sankara and Adonis Frazier, who have trained Minneapolis-based welterweight contender Jamal James. But his ambition hasn’t changed: Family remains the priority. Morrell’s goal is to make enough money boxing so he can legally be reunited with them in the U.S.

“I am very fortunate here in Minnesota, because I have people here who take care of me and I have a sense of family. That I was able to travel internationally opened my eyes to what life was like outside of Cuba,” said Morrell.

Morrell weighed 171 ¼ pounds for his pro debut on August 31, 2019 at the Minneapolis Armory -- a 65-second TKO of Yendris Rodriguez Valdez.

The 22-year-old followed that up in November on FS1, knocking out an opponent in southpaw Quinton Rankin who entered the fight with a 15-6-2 record and had most recently gone the eight-round distance with left-handed former champion Chad Dawson five months before facing Morrell.

“I would describe my style as a mixture of my four favorite fighters,” said Morrell, who was nicknamed, “O.D.” by a trainer perhaps for the initials of the first two of his names. “I’m talking about Mike Tyson, Roy Jones, Sugar Ray Leonard and Roberto Duran.”

Entering the bout, Morrell (3-0, 2 KOs) had fought less than three rounds collectively in his pro career, compared to Allen’s 121. But on this night, the former Cuban amateur standout went a full 12 with ease, maintaining a consistent pace and improving as the bout progressed.

Morrell controlled the action from the opening bell, wading in with right hooks and uppercuts from his southpaw stance. Guyana’s Allen was game, landing his own share of shots during the exchanges, including a stiff right hook late in the third.

Those punches were few and far between. Morrell seized control in the third and never looked back, landing two hard right rights upstairs as he came forward.

Allen, 35, 22-1-1 (14 KOs), had no answers, his punch output decreasing as he searched for ways to land. Morrell poured it on in the eighth, landing an uppercut on the inside. Another right hook in the 10th momentarily buzzed the durable Allen. Morrell sought to finish with a KO but it wasn’t to be. Nevertheless, he finished strong, serving notice to the rest of the division that there is a new kid on the block.

Morrell came out throwing fast, accurate and powerful combinations from round one and almost immediately had Gavronski, from Bellevue, Washington, staggering groggily around the ring. Morrell finally dropped the dazed Gavronski for a nine count with a fearsome combination of shots at the end of the first round.

The relentless attack continued in rounds two and three, as Morrell delivered an array of power shots. After a final clean uppercut sent Gavronski's head snapping back, Referee Jack Reiss had seen enough and waved it over at 2:45 of round three.

Morrell comntinued his assault on the 168-pound division on June 26, 2021, when he defeated Mario Cázares with a knockout just 2:32 in to the first round of their contest that headlined FOX PBC Fight Night and on FOX Deportes on Sunday from The Armory in Minneapolis.

“I didn’t expect that to end so quickly,” said Morrell. “I thought it would be more like a five or six round fight. However, once Cazares stepped in the ring, I noticed that he was not ready to fight on my level. He wasn’t ready for this kind of test or this level of fight.”

On the devastating knockout, Morrell said, “When I saw the opening, I took him out. When I hit him, I saw his legs wobble and I knew he was gone, completely out.”

STEPPING UP AND SHOWING OUT

On November 5, 2022, Morrell took a big step up in class when he defended his WBA World Super Middleweight title against undefeated mandatory challenger Aidos Yerbossynuly.

In a fight where over 1,100 combined punches were thrown, the southpaw Morrell, who showed a diverse offensive arsenal and also dazzled with his flashy footwork and defense, landed 39 percent of his punches and 47 percent of his power punches. He landed 64 more jabs and 91 more power punches than the game Yerbossynuly, who showed both skills and guts. Morrell’s 54 body punches landed was also a career-high.

In the end, Morrell was simply too much, dropping Yerbossynuly twice in the 12th round to induce a stoppage in that final frame.

“Thank you everybody in Minnesota for coming to support me,” said Morrell, who predicted an eighth round KO during Thursday’s final press conference. “Thank you to my family, my team, everybody. I’m so excited, man. I told everyone at the press conference that the fight is mine. I saw he was hurt at that moment and then the results came in, that knockdown came. A knockout is a knockout, so if it’s in the eighth or 12th round, it’s a knockout anyways.”