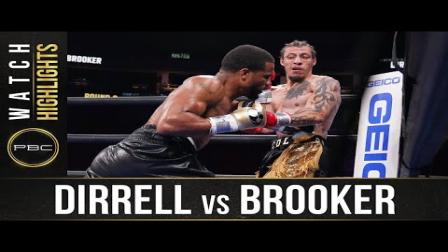 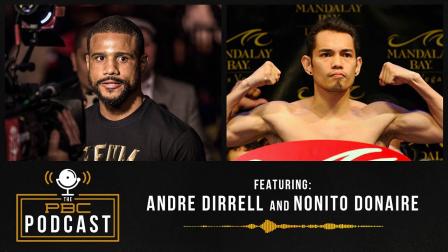 Jonnie Rice Pulls Off a Shocker in Stopping Michael Coffie

The late substitute upsets the odds in emphatic fashion Saturday night in the main event of FOX PBC Fight Night.

This Week on The PBC Podcast: Nonito Donaire & Andre Dirrell

Two of the game's best share their experiences in and out of the ring and why they still have more to give.

Andre Dirrell is a threat to floor his opponent with either hand. That exceptional athleticism helped “The Resurrected” become a U.S. Olympic bronze medalist at the 2004 Athens Games, and has aided his rise as one of the most talented fighters in the world.

Dirrell and his younger brother, Anthony, began boxing while still in elementary school in their hometown of Flint, Michigan. The brothers have been trained from the beginning by grandfather Leon “Bumper” Lawson Sr., a former sparring partner of Muhammad Ali, and uncle Leon Jr.

Andre Dirrell was an exceptional amateur, winning the 2003 National Amateur Championship and competing at the 2003 Pan American Games, where he lost to Yordanis Despaigne of Cuba.

He qualified for the 2004 U.S. Olympic team and won the bronze medal at 165 pounds, defeating Despaigne in the process before losing to Gennady Golovkin of Kazakhstan.

Dirrell, who earned the nickname “The Matrix” for his ability to quickly vanish after punching his opponents, turned professional soon after the Olympics, finishing his amateur career with 231 wins.

Dirrell made his pro debut on January 27, 2005, with a fourth-round technical knockout of Carlos Jones in Glen Burnie, Maryland.

The switch-hitting southpaw quickly piled up victories, running his record to 10-0 with six knockouts by the end of 2006.

Dirrell utilized his mobility and counterpunching skills to stymie the aggressive Englishman, but he had a point deducted for holding in the 10th round and lost a disputed 12-round split decision.

Again fighting in the Super Six tournament, Dirrell defeated Arthur Abraham in Detroit in March 2010, winning when Abraham was disqualified in the 11th round for hitting Dirrell after he slipped and was kneeling on the canvas.

Dirrell was scheduled to fight Andre Ward in the Super Six, but had to withdraw from the tourney in October 2010 because of neurological problems sustained in his bout against Abraham.

The rise of "The Resurrected”

Dirrell finally returned to the ring in December 2011 after a 21-month hiatus, and gained a second-round TKO of Darryl Cunningham in Cabazon, California.

Dirrell fought just once over the next 2½ years, winning a 10-round unanimous decision over Michael Gbenga in McAllen, Texas, in February 2013.

He picked up his activity in 2014, winning three times in five months to put himself back in title contention.

The southpaw, who rechristened himself “The Resurrected,” gained a fifth-round TKO of Vladine Biosse in August, defeated Nick Brinson by fourth-round TKO in October and won a 12-round unanimous decision over Derek Edwards in December.

Dirrell got his second try at winning a world title when he fought Englishman James DeGale at Boston's Agganis Arena on May 23, 2015, in a Premier Boxing Champions bout that aired live on NBC.

DeGale knocked Dirrell to the canvas twice in the second round to gain an early advantage.

Dirrell, however, stormed back and controlled the pace of the fight throughout the middle rounds.

It would not be enough to win the bout, though, as DeGale won a unanimous decision, handing Dirrell his second career loss.

Dirrell returned to the ring on April 29, 2016, winning a unanimous decision over Blake Caparello in Atlantic City. The victory set up a shot at the interim IBF world 168 belt when he faced Jose Uzcategui on May 20, 2017, at MGM Grand Harbor in Oxon Hill, Maryland. It was a competitive battle that ended abruptly via eighth-round DQ after Jose Uzcategui hit Dirrell just as the bell rang to end the eighth and he was ruled unable to continue.

The rematch occurred on March 3, 2018, at Barclays Center in Brooklyn, New York. This time, Uzcategui was at his best, stopping Dirrell in the eighth. The loss pushed Dirrell to move up to light heavyweight. In Dececember 2019, he bounced back in style, knocking out Juan Ubaldo Cabrera in five rounds in his 175-pound debut.

Dirrell looked even better in his next bout. On July 31, 2021, he stopped Christopher Brooker in three rounds at Prudential Center in Newark, New Jersey.

On November 5, 2022, Dirrell took on his toughest challenge to date at light heavyweight, facing Yunieski Gonzalez in a Premier Boxing Champions event from The Armory in Minneapolis, live on SHOWTIME. Dirrell was the aggressor throughout, stopping Gonzalez with a series of brutal shots in the 10th and final round.