Deontay Wilder didn’t come out with his usual ferocity early on against Gerald Washington, but it didn’t take the champ long to end things once he got rolling. 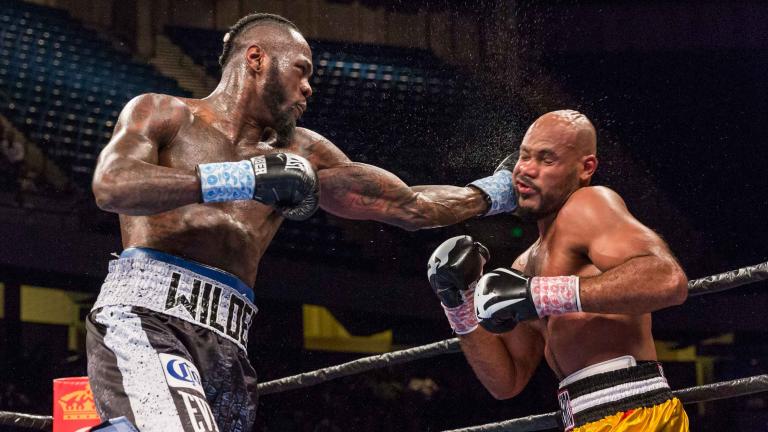 Fighting for the first time since surgery on his right hand and bicep last year, Wilder gained a fifth-round TKO of Washington to retain his heavyweight world title.

In the final round, Wilder caught Washington with a punishing lead right hand before knocking the former University of Southern California football player down with a left hook.

After Washington regained his feet, Wilder went back on the attack and blasted his opponent with a pair of left hooks amid a violent flurry that led referee Mike Griffin to stop the bout at the 1:45 mark of Round 5.

After breaking his hand and tearing his bicep during his TKO of Chris Arreola last July, and subsequently having surgery for both injuries, Wilder said he suffered no setbacks in beating Washington.

The 31-year-old Tuscaloosa, Alabama, native started slowly as he neglected his usually potent jab against Washington, who was surprisingly effective as the aggressor in the early rounds.

It wasn’t until the third round that Wilder began to pump his jab with any consistency as the crowd chanted “De-on-tay, De-on-tay” in support of the champ.

Wilder said that his team’s original strategy against Washington was to throw jabs and move since he was returning from injury, but that they abandoned that plan in the dressing room right before the fight.

Instead, he patiently laid in wait for Washington to provide an opening, which the champ eventually found.

In the fourth, Washington caught Wilder with a solid left that seemed to wake up the champ, who delivered a thundering left-right combination to the body of the former Navy helicopter mechanic late in the round.

The fighters were deadlocked on two of the judges’ scorecards through four rounds, while Wilder held a slim lead on the other. Afterward, the champ said he wasn’t concerned about his slow start against the 34-year-old Vallejo, California, resident.

After defending his world title for the fifth time, Wilder saluted the crowd of 12,346 as “Sweet Home Alabama” blared from the arena’s speakers with many fans adding “Roll Tide Roll!” to the chorus.

Wilder was originally supposed to defend his championship against Andrzej Wawrzyk, but the Polish contender tested positive for performance-enhancing drugs in mid-January, which gave Washington his shot at the title.

Fellow heavyweight champion Joseph Parker was seated ringside for the fight, and Wilder expressed his desire to face the New Zealand native next in his quest to unify the division’s four major titles.

Deontay Wilder didn’t come out with his usual ferocity early on against Gerald Washington, but it didn’t take the champ long to end things once he got rolling.

After nine months of adjusting to a revolving door of opponents and rehabbing a surgically repaired right hand and biceps, Deontay Wilder isn’t just anxious to once again rev up his career engine. The heavyweight champ is determined to kick that engine into overdrive.