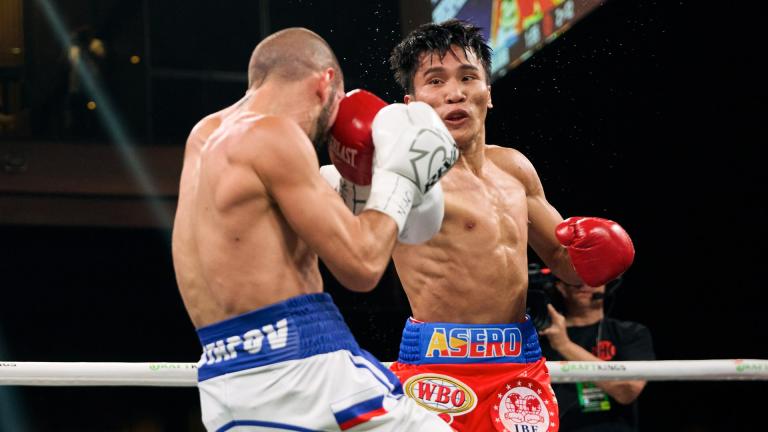 "I’m very happy with the victory,” said Astrolabio. “This was my first time in the U.S. and I'm thankful to Manny Pacquiao and my whole team for this opportunity. I felt very strong against my opponent. Just like I did against Guillermo Rigondeaux, and that gave me confidence for this fight.”

The Filipino Astrolabio started the bout in strong form, sending Potapov to the canvas for the first time in his career with a charging left hook late in round one. Potapov was able to get to his feet and gained some momentum in round two by countering the aggressive Astrolabio, winning the round on two judges’ cards.

In round three however, Potapov took a clean punch that caused blood to start leaking out of his right eye, hindering his offensive output. In round four, Astrolabio caught him with another counter left hook, which stunned Potapov and forced him to take a knee in his corner.

As the fight hit round six, Astrolabio again upped his pressure and hurt Potapov midway through the round with a ferocious uppercut followed by a straight right hand. This proved to be the decisive blow, as referee Robert Hoyle counted Potapov out 1:26 into the round. At the time of the stoppage, Astrolabio held a 74-58 edge in punches landed and 56-45 advantage in power punches.

“I have nothing to say about my performance, he was just the better fighter tonight,” said Potapov.

"I will fight whoever I'm able to, but my dream is to become world champion,” said Astrolabio. “I want to fight for the belts. I'm so thankful that I had this and that I was able to give everyone a knockout. This is the biggest moment of my career and I'm going to keep pushing to fight the best."