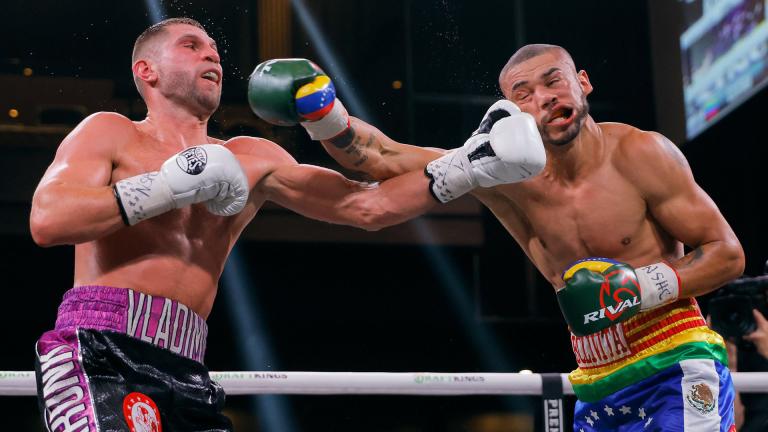 "I came to America, and I've been living here for the last few years, to reach my goal and become world champion,” said Shishkin, who won by scores of 115-113 and 117-111 twice. ”This is a big step in that direction. It was a big chance for me and I took advantage of it.”

Both fighters came out aggressive from the outset, looking to land powerful right hands from close quarters. That toe-to-toe mentality maintained throughout the fight, as they frequently wrestled for position on the inside. As the fight progressed it was Shishkin’s combination punching that helped separate him from Uzcategui on the judges’ cards.

“I think I did enough to win the fight, but the judges didn’t see it that way,” said Uzcategui. “He was clutching and grabbing me and pulling me in, and I was never able to get enough clean shots.”

Shishkin averaged 63 punches thrown per round, compared to Uzcategui’s 43, and out-landed his opponent 38-20 over the final two frames. Round seven saw both fighters increase their aggression from the bell, but neither was able to seriously hurt the other, although both sported swelling over their eyes.

"I felt in control throughout the fight,” said Shishkin. “I'm on a higher level now, so the fights are going to be tougher. He pushed me hard. It was something new for me.”

With his strong finish, and a 238 to 162 overall edge in punches landed, Shishkin was able to clinch the victory. The win puts the unbeaten Shishkin into position to challenge for a title at 168 pounds.

"I want all the big names at 168 pounds,” said Shishkin. “Canelo is the champion right now and I'll be ready to give him all he can handle.”