Bout ruled a no contest

The bout was ruled a no contest after three rounds due to a punch after the bell by Murat Gassiev that left Isiah Thomas unable to continue.

Isiah Thomas got his bell rung by Murat Gassiev after the bell rung, resulting in a no contest after three rounds in a fight between still-unbeaten 200-pound prospects.

But the southpaw Thomas, with a four-inch reach advantage, worked skillfully behind his jab, diffusing Gassiev’s charge and then whacking him with left hands over the first two rounds.

Gassiev began to assert himself and landed a strong right hand as Round 3 came to an end, but then the Russian blasted Thomas again after the bell, sending the Detroit native teetering against the ropes as referee Jay Nady jumped in.

After Thomas returned to his corner, Nady declared him unable to continue and ruled the bout a no contest. 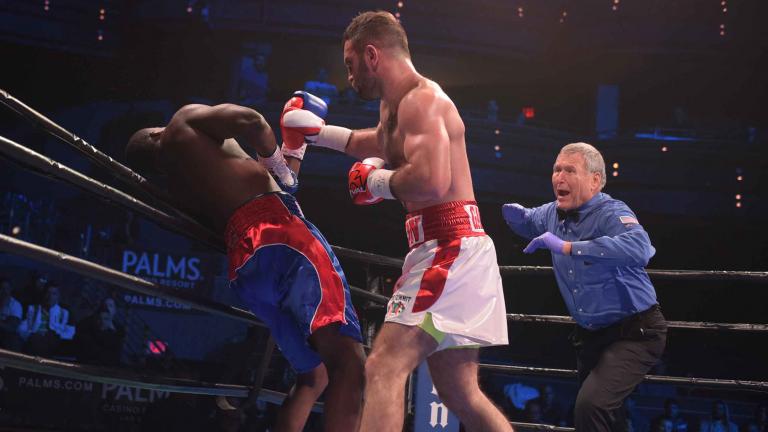 Murat Gassiev hits Isiah Thomas after the conclusion of the third round as referee Jay Nady rushes in. (Jann Hendry/Premier Boxing Champions)

Turns out your girlfriend was lying: Size does matter. At least in the sport of boxing, where it pays to have arms as long as your opponent’s legs, especially when you’re trying to fend off a dude coming at you like a bowling ball destined for a strike.

Tiny meal portions, tinier Speedos, a strange aversion to ice cubes, an even stranger infatuation with David Hasselhoff’s singing voice: Some things are distinctly European. Add boxing’s 200-pound division to that list—just not for long, if Isiah Thomas has his way.

If styles truly do make fights, then an upcoming battle of unbeaten big boys Isiah Thomas and Murat Gassiev figures to be a doozy.