In the co-main event, sensational super welterweight Sebastian "The Towering Inferno" Fundora (15-0-1, 10 KOs) overwhelmed hard-hitting Nathaniel Gallimore (21-5-1, 17 KOs) on his way to a stoppage victory in the sixth round.

Towering at nearly six-feet six-inches, Fundora used his length early to beat his hard-charging opponent to the punch, before using impressive punch output to wear Gallimore down on his way to earning the TKO. Gallimore had some success early, making Fundora fight on the inside while trying to set up, and occasionally landing, his own hard counters.

In round three, Fundora's relentless power attack to the head and body began to be met with less resistance from Gallimore, who increasingly seemed to rely on landing one big punch to turn the tide of the fight. The pressure remained steady, as Fundora came forward throwing 74, 111 and 90 power punches respectively in rounds three, four and five.

Midway through round six, Fundora's relentless offensive output eventually forced referee Ray Corona to halt the bout 1:28 into the round to give Fundora the victory over Gallimore, who appeared to suffer a leg injury during the fight.

After the fight, the 22-year-old Fundora discussed dedicating the fight to his promoter Sampson Lewkowicz, along with the trunks he wore to honor those who have and continue to suffer from COVID-19. 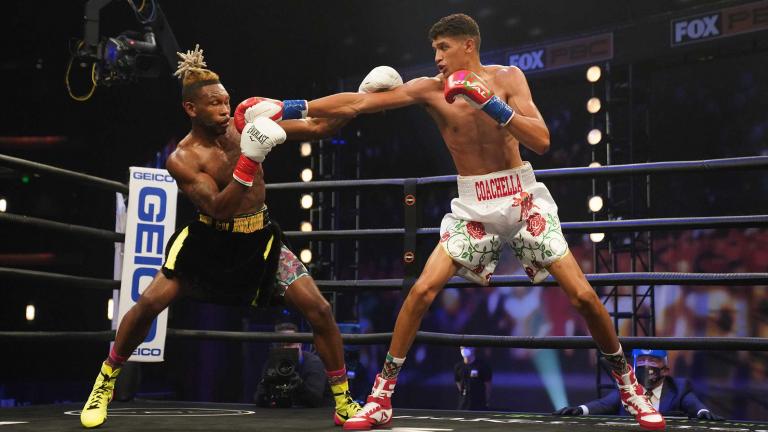 Fundora uses his jab to keep the distance.