Veteran contender Brian Mendoza dropped former unified champion Jeison Rosario twice on his way to a fifth-round knockout victory in their 10-round middleweight. 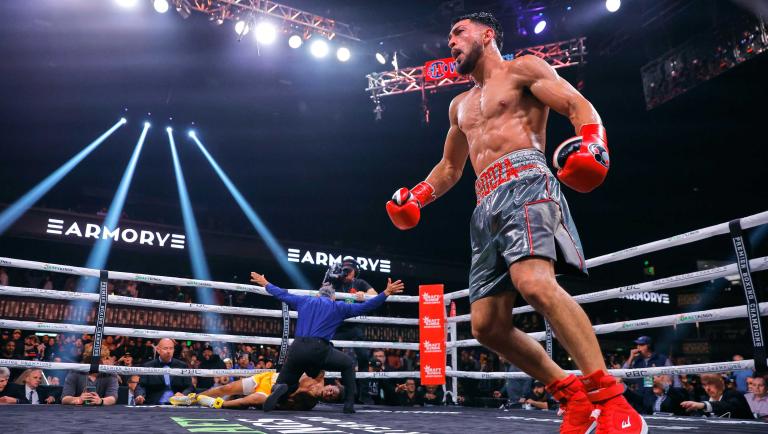 “They thought I was a fill-in,” said the 28-year-old Mendoza, who took the fight on ten days’ notice after Yoelvis Gomez suffered an injury. “I’ve been in the gym for seven months straight since I fought on March 26. This was anything but a last-minute call.”

Thirty-five seconds into the fifth stanza, Mendoza landed a vicious right uppercut that sent Rosario to the canvas for the second time in the fight. Rosario stumbled when attempting to rise, prompting referee Mark Calo-Oy to put a stop to the action.

In just five rounds of work, Mendoza was able to land 25 punches to the susceptible body of Rosario. In the second round, Mendoza landed a left hook to the body, causing Rosario to belatedly drop to a knee. This was the fourth time in Rosario’s career that he was dropped with a body shot.

“You watch tape on the guy, and you see what they’re open to,” Mendoza said. “I saw an opening and I went for it. I was just beyond ready for anything. Those are the adjustments you work on in camp. He kept slipping the straight line I was throwing. He was ducking and I was like, let’s see if this works. I sat on the punch and let it go, those were the instincts I worked.”

Tonight’s defeat marked the end of a splendid career for Rosario, who captured the WBA and IBF 154-pound belts by stopping Julian Williams in one of 2020’s biggest upsets.

“I think it’s time to say goodbye,” Rosario said. “I’m not fighting anymore. I’m going to retire. I have accomplished a lot, and it was good, but my career stops here. The most important thing is that I’m still healthy. I feel bad that I couldn’t give the Dominican people the result they hoped for, but I love you all and I thank you for all the support through the years.”