Moments before the bell to end Round 2, Thomas Williams Jr. landed a vicious left hook that dropped and stopped Edwin Rodriguez.

Thomas Williams Jr. said he wanted to be the one to dethrone lineal 175-pound champion Adonis Stevenson. On Saturday night, the “Top Dog” certainly proved he’s worthy of a shot at the top of the division.

Williams, a 28-year-old from Fort Washington, Maryland, stunned Edwin Rodriguez with a monster left hand in the final seconds of the second round to score a knockout in their scheduled 10-round fight from the StubHub Center in Carson, California. With the win, Williams put himself in position to challenge Stevenson, perhaps as early as this summer.

There were a couple of moments early on when Williams (20-1, 14 KOs) looked like he’d finish the fight in Round 1, connecting with some strong right hands that hurt Rodriguez (28-2, 19 KOs) in the waning moments of the stanza.

The 30-year-old Rodriguez, who was looking for his fifth straight victory and fourth consecutive stoppage, regrouped to control the start of the second round. But that momentum was short-lived, as big rights from Williams once again found their mark toward the middle of Round 2.

Then as the frame was about to come to a close, Williams crushed Rodriguez with a monster left hook that landed flush. Rodriguez crumpled to the canvas as the bell rang, and although he beat the count, referee Wayne Hedgpeth concluded the former title challenger was unfit to continue.

Both Rodriguez and Williams had to climb up from the canvas from first-round knockdowns in separate bouts on the same card in November. And both fighters—along with Fox guest commentator and 147-pound champion Danny Garcia—predicted their bout would not go the distance.

It didn’t even come close. 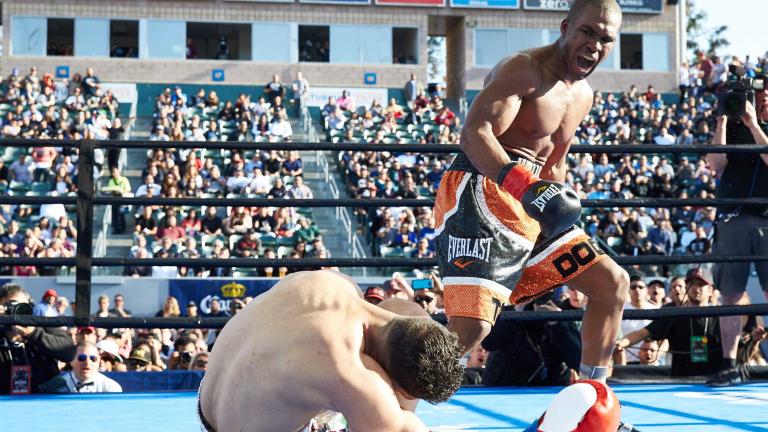 Thomas Williams Jr. stands over Edwin Rodriguez after dropping him with a thundering left hook at the end of the second round Saturday in Carson, California. (Suzanne Teresa/Premier Boxing Champions)

Presenting the 12 Rounds of Christmas: Round 2 (Rodriguez vs Williams)

You would’ve been hard-pressed to find a fan or analyst who thought sluggers Edwin Rodriguez and Thomas Williams Jr. would make it to the finish of their 175-pound world title eliminator on April 30 in Carson, California. Turns out they didn’t even come close.

Thomas Williams Jr. said he wanted to be the one to dethrone lineal 175-pound champion Adonis Stevenson. On Saturday night, the “Top Dog” certainly proved he’s worthy of a shot at the top of the division.

Edwin Rodriguez and Thomas Williams Jr. have each warned fight fans to keep their eyes wide open Saturday, as neither believes their light heavyweight slugfest is going the distance.