In a bout in which both fighters hit the canvas, Ivan Redkach and Luis Cruz battled to a 10-round split draw.

The fight seemed to be slipping away from Ivan Redkach as it got into the late rounds, but one big left hand helped him regain a grip on things.

After being dropped by Luis Cruz in the second round, Redkach gained knockdowns of his own in the eighth and ninth and rallied to salvage a 10-round split draw.

Redkach trailed on all three judges’ scorecards entering the eighth, but the Ukrainian southpaw caught Cruz late in the round with a winding left hand that landed flush on the Puerto Rican’s nose and sent him crashing to the canvas.

Redkach followed that up in the ninth with a clubbing left hand that appeared to cup Cruz’s head and force him down with just seconds left in the round, but referee Gary Rosato ruled it a knockdown.

It was Cruz who gained the upper hand early in the fight, scoring a knockdown in the second round as he followed his jab with a straight right hand that caught Redkach and sent him backpedaling to the canvas.

Cruz countered effectively through the middle rounds as he maintained his edge, using Redkach’s aggression against him by doubling and tripling up on his jab, and landed some well-timed left hooks.

Cruz, who had lost four of his previous seven fights, appeared to be in control of the bout until Redkach shifted momentum in his favor with his two late knockdowns. 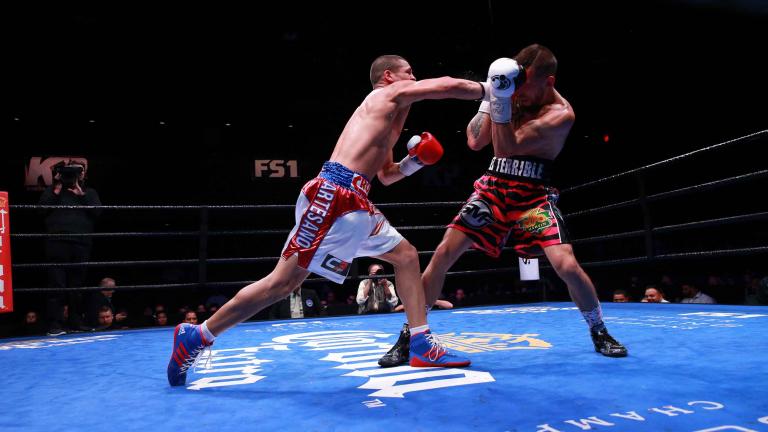 The fight seemed to be slipping away from Ivan Redkach as it got into the late rounds, but one big left hand allowed him to regain a grip on things.

Ivan Redkach is still haunted by how his fight against Dejan Zlaticanin ended last June.

In his last fight, Ivan Redkach added an important accomplishment to his professional résumé: He proved he’s capable of rebounding from a defeat. Of course, the rising 140-pound prospect hopes he’ll never have to prove it again.