Immanuwel Aleem dished out all he could over eight rounds, and Jonathan Cepeda proved he could take it.

In an action-packed, 160-pound bout, Aleem (16-0, 9 KOs) dominated from start to finish to gain a unanimous decision over Cepeda (17-2, 15 KOs), who pressed through the punishment as he fought back to the final bell.

All three judges scored the bout 79-73 in favor of Aleem, who ended Cepeda's five-fight winning streak.

Both fighters threw bombs from the start. Aleem landed the harder blows initially in Round 1, but Cepeda retaliated with some heavy shots of his own in the final minute. A cut developed in Round 2 above Cepeda’s right eye, but the New York City resident was undeterred as he continued to come forward against Aleem’s attack.

Aleem, 22, began to take command in the middle rounds, landing combinations with pinpoint accuracy and drilling his 31-year-old opponent with left hooks as both fighters worked tirelessly. Aleem continued to batter the unyielding Cepeda into the late rounds, and nearly finished the job toward the end of the seventh.

Cepeda survived, however—in fact, despite absorbing countless brutal haymakers, he never hit the deck, displaying incredible resilience in his first fight in more than a year. 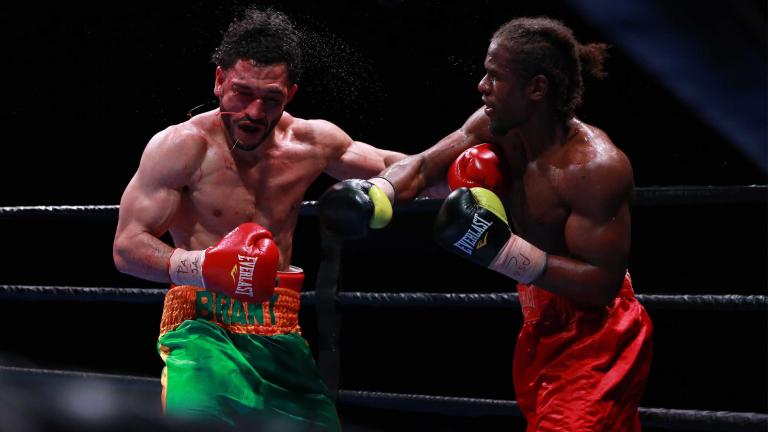 Presenting the 12 Rounds of Christmas: Round 7 (Aleem vs Cepeda)

Here’s what we knew about Immanuwel Aleem and Jonathan Cepeda heading into their 160-pound clash last spring: Both fighters were a combined 32-1-0 with 24 knockouts. Here’s what we learned after eight insanely explosive rounds: Both fighters could throw and absorb a helluva punch.

Immanuwel Aleem dished out all he could over eight rounds, and Jonathan Cepeda kept on taking it.