Berto wins by KO in Round 6

The hometown crowd came out to see Josesito Lopez, the Riverside Rocky, do some damage to Andre Berto Friday night at Citizens Business Bank Arena in Ontario, California, but an energized Berto sent them home disappointed with a sixth-round knockout.

Lopez started out deftly avoiding Berto’s jab, but a fourth-round flurry in a neutral corner seemed to slow Lopez, as a cut developed under his right eye. The damage proved to be too much, and Berto capitalized two rounds later.

Berto sent Lopez to the deck in the sixth round, but Lopez climbed up off the mat. It would be a short-lived try at a rally, as Berto connected with another right hand that put Lopez down for good at 1:03 of the sixth.

“Josesito’s a tough kid,” Berto said after the fight. “I knew he was in front of his home crowd, he was going to come out and go bombs away, so I just took my time and kept working the jab.” 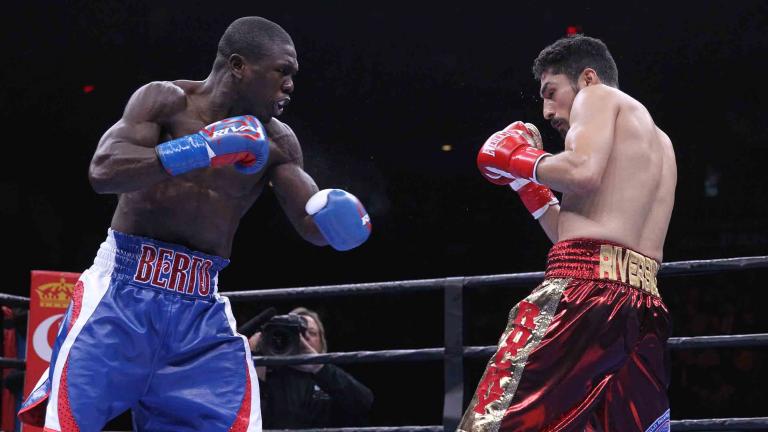 Andre Berto prevailed over Josesito Lopez, gaining a KO in the sixth round

In this week’s edition of Trainer Tuesday, strength and conditioning coach Tony Brady provides a look into Andre Berto’s training camp as he prepared for his March 13 fight against Josesito Lopez.

Andre Berto shows he's all the way back

Josesito Lopez had it all set up just so. Fighting in front of an adoring crowd at Citizens Business Bank Arena in Ontario, California—just about a half-hour drive from his hometown of Riverside—Lopez looked to pay those local fans back for all their love with a win on Premier Boxing Champions' first Spike TV broadcast.

The Moment for Andre Berto came in the sixth round Friday night, when his sustained jab set up a crunching right hand that culminated a four-punch sequence and drove Josesito Lopez to the canvas for the first of two knockdowns at Citizens Business Bank Arena in Ontario, California.