It was “Prince” Charles Martin was entered the ring at London’s O2 Arena wearing a crown, but it was Anthony Joshua who exited it as the newest monarch of boxing.

Joshua dropped the defending champion twice seconds apart in the second round to thrill the sellout crowd of 20,000, leading referee Jean-Pierre Van Imschoot to wave an end to the bout at 1:32 of the round.

Charles Martin was making his first defense of the title he won in January with a third-round stoppage of Vyacheslav Glazkov, but the 6-foot-5 American southpaw never threatened the 6-foot-6 Joshua, who turned to the crowd when the fight was stopped and shrugged at the ease with which he scored the knockout.

Both fighters came out cautiously to start the fight, but Joshua gained the upper hand late in the first round by landing a couple of stinging right hands.

Things quickly got worse for Martin in the second round. The 29-year-old southpaw threw a lazy jab that Joshua was able to slip and counter with a straight right hand that caught Martin square on the jaw and sent him to the canvas.

Just seconds later, Martin missed with another jab, and once again Joshua retaliated with a devastating right that dropped the American, who grinned in disbelief as he sat up on the canvas.

Martin looked at Van Imschoot and finally jumped to his feet at the end of the 10-count, but the referee waved the fight off as Martin argued he could continue.

Martin, who entered the ring wearing an oversize crown before the fight, looked forlorn as he trudged back to his corner after experiencing his first defeat. 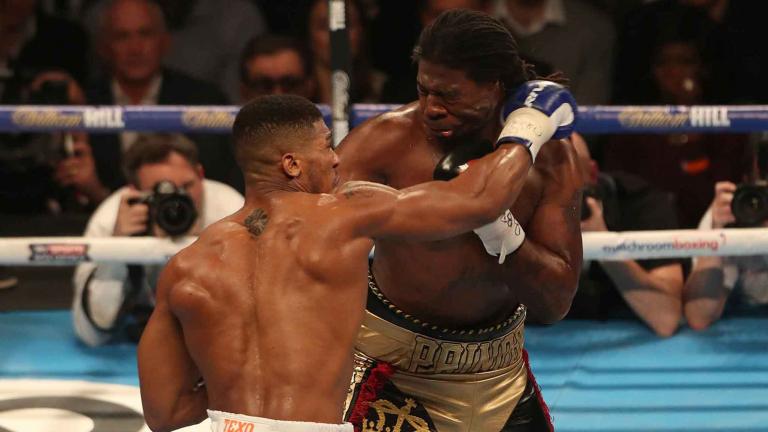 It was “Prince” Charles Martin was entered the ring at London’s O2 Arena wearing a crown Saturday, but it was Anthony Joshua who exited it as the newest monarch of boxing.

Bundled up to stave off London’s cold northerly wind, Charles Martin is hoping he doesn’t catch a nasty chill in the ring Saturday during his world heavyweight title clash against British sensation Anthony Joshua.