Defending his 126-pound title for a second time, Lee Selby overcame a second-round knockdown to win a unanimous decision over Eric Hunter.

It wasn’t as easy or as pretty as he had hoped. And his backside hit the canvas for the first time in his professional career. But in the end, “Lightning” Lee Selby proved why he’s one of the top boxers in the loaded 126-pound division. 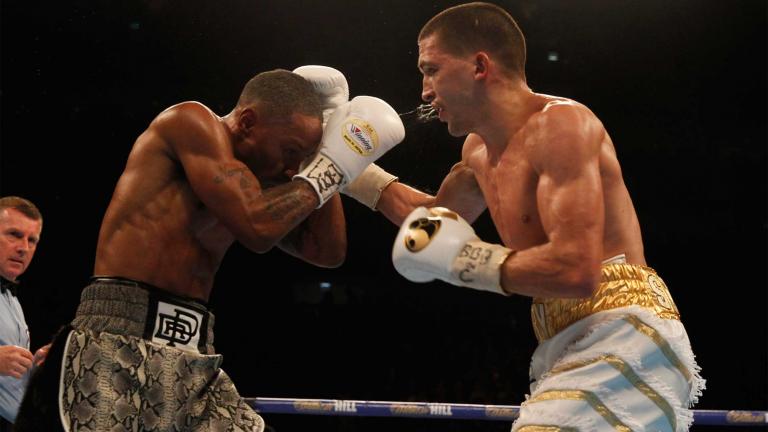 Fighting in front of a partisan, sold-out crowd in London’s 02 Arena, Selby (23-1, 8 KOs) rose from a second-round knockdown—the first of his career—and overcame several low blows Saturday to dominate Eric Hunter, winning a wide 12-round points decision to retain his 126-pound title.

Selby, 29, was in control for much of the bout, often beating Hunter to the punch and landing the crisper, more powerful shots. However, early on, it was a powerful shot by Hunter that looked like it might cost Selby his title in his second defense.

With a minute to go in Round 2, Hunter countered a Selby miss with a left hook that landed flush on the champion’s jaw and immediately sent him sprawling to the canvas, much to the shock of the crowd. If the punch truly hurt Selby, the Welshmen hid it well, immediately bouncing to his feet and reengaging Hunter as soon as the fight resumed.

Selby started to claw his way back into the contest with a solid third round, catching Hunter with a succession of right hands, although they seemed to have little effect on the 29-year-old Philadelphia native.

The fourth round was a far cagier affair as both boxers clearly had earned each other’s respect, but Selby really took control in the fifth as he detonated three clean right hands on Hunter’s jaw. Again, though, Hunter took the shots and came back for more.

It would be a scenario that would repeat several times down the stretch, with Selby proving the more active and accurate fighter. Hunter did have occasional flashes, particularly in the eighth and 10th rounds when he landed some clean shots, but he couldn’t overcome Selby’s superior boxing skills.

Hunter also struggled to stay within the strike zone, as he was warned multiple times by referee Marcus McDonnell for low blows. McDonnell eventually deducted a point from Hunter in the eighth, then put him on disqualification notice after another low shot in the ninth.

It wasn’t as easy or pretty as he had hoped. And his backside hit the canvas for the first time in his professional career. But in the end, “Lightning” Lee Selby proved why he’s one of the top boxers in the loaded 126-pound division.

At the final news conference in advance of his showdown Saturday against 126-pound world champ Lee Selby at London’s O2 Arena, Eric Hunter was asked for his thoughts. “I’ve come to fight,” the challenger said.

For 126-pound champ Lee Selby, defeating Eric Hunter would be sweet in more ways than one

Lee Selby has one sweet post-fight plan after he takes care of Eric Hunter on Saturday at the O2 Arena in London: a slice or three of cheesecake.