Jose Uzcategui dropped Julius Jackson three times in the first round, then scored the decisive knockdown early in the second to send Jackson to his first professional loss.

Julius “The Chef” Jackson claims to lack the one-punch knockout power of his father and trainer, Julian, a heavy-hitting, two-division champion in the late 1980s and 1990s. Unfortunately for Jackson, his opponent had more than enough firepower for a head-swiveling, all-out assault.

Jose Uzecagtegui floored Jackson three times in the first round and dropped him once more early in the second en route to a sensational stoppage in a 168-pound showdown.

Uzecagtegui (24-1, 20 KOs) blasted and dropped Jackson (19-1, 15 KOs) with a big right hand to the point of the chin just a minute into the bout, clobbered him to the canvas a second time at the 1:27 mark with a right-hand, left-hook combination, then ripped home a right uppercut and left hand that floored Jackson once more with 35 seconds remaining.

Somehow, Jackson made it to the bell, but all that did was delay the inevitable.

At the start of the second round, Uzcategui immediately pounced on his rival, finishing off an eight-punch barrage with a clean left hook that forced referee Tony Weeks to wave an end to the fight at the 45-second mark.

A Venezuelan-born resident of Mexico, the 24-year-old Uzcategui has now stopped 12 of his last 14 opponents. And on this night, he called his shot, vowing before the bout that he’d take out Jackson within six rounds. 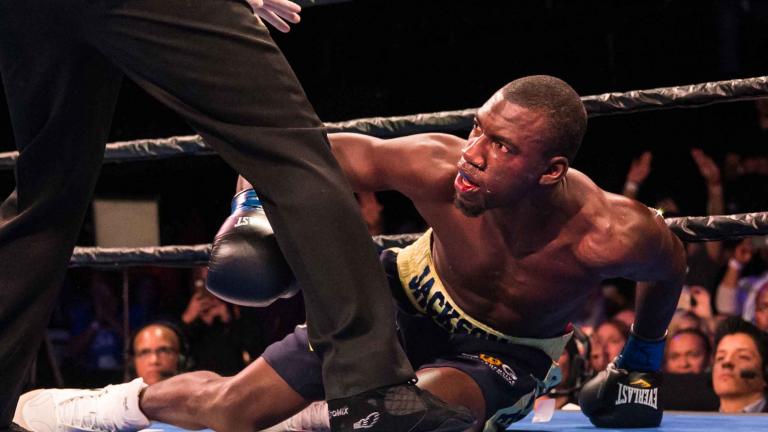 A woozy Julius Jackson tries to rise to his feet after one of three first-round knockdowns during Tuesday's 168-pound TKO loss to Jose Uzcategui in San Antonio, Texas. (Josh Jordan/Premier Boxing Champions)

Recipe for success: Jose Uzcategui cooks up a stunning TKO victory over Julius ‘The Chef’ Jackson

Jose Uzcategui vowed that Julius Jackson wouldn’t last six rounds against him Tuesday night, and the man nicknamed “Money” cashed in on that prediction.

Can you smell what Julius Jackson is cookin’? You could if you were a bystander in his kitchen, where the unbeaten 168-pound contender is as deft with a pair of oven mitts as he is with boxing gloves in the ring.

Heavy hitter Julius Jackson powers his way up the 168-pound ladder, thanks to a little help from his dad

Some sons who follow in their father’s career footsteps are reluctant to lean on their old man for advice, preferring instead to make their own way. Julius Jackson is quite the opposite.