In a battle of former world champions, Algenis Mendez effectively used his jab to outbox Miguel "Titere” Vazquez and earn a 10-round unanimous decision in a 135-pound bout.

They call Miguel Vazquez “The Puppet,” but an initially perplexed Algenis Mendez found a way to control his opponent's strings.

Outhustled, roughhoused and beaten to the punch by his Mexican rival through the middle rounds, Mendez staged a late rally behind his jab and left hook to earn a unanimous decision in a 135-pound clash of former champions.

Miguel Vazquez (35-4, 13 KOs)—a 28-year-old Mexican whose unorthodox style is atypical of his countrymen’s traditional warrior search-and-destroy mentality—outlanded Mendez 111-101 overall. He also briefly shook Mendez with a third-round, right hand-left hook combination before later being stunned himself by a right-left combo at round’s end.

Until that point, Mendez struggled to land his jab or establish a rhythm with his setups. He also frequently missed windups with his right hand and his check left hook as Vazquez continued to force the action and frustrate the Dominican by clenching, pushing and leading with his head.

Mendez began to turn the momentum with a big seventh round, which he appeared to be winning behind his jab and left hook before referee Gregorio Alvarez deducted a point from Vazquez for holding.

From that point, Mendez began to time Vazquez successfully through the ninth and 10th rounds, catching him off the jab with the left hook, including a telling shot early in the final round that caused sweat to spray from his rival’s head. 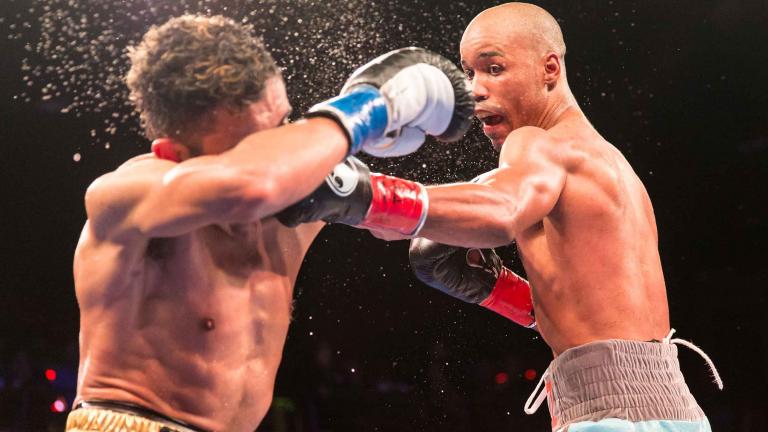 Recipe for success: Jose Uzcategui cooks up a stunning TKO victory over Julius ‘The Chef’ Jackson

Jose Uzcategui vowed that Julius Jackson wouldn’t last six rounds against him Tuesday night, and the man nicknamed “Money” cashed in on that prediction.

Miguel Vazquez learns the importance of preparation in his Greatest Hits

You could reasonably assume Miguel Vazquez never did a stint in the Boy Scouts, judging by his Greatest Hits.