It took Sergiy Derevyanchenko a few rounds to work his way inside against Kemahl Russell, but he was far too much to handle once he got there. 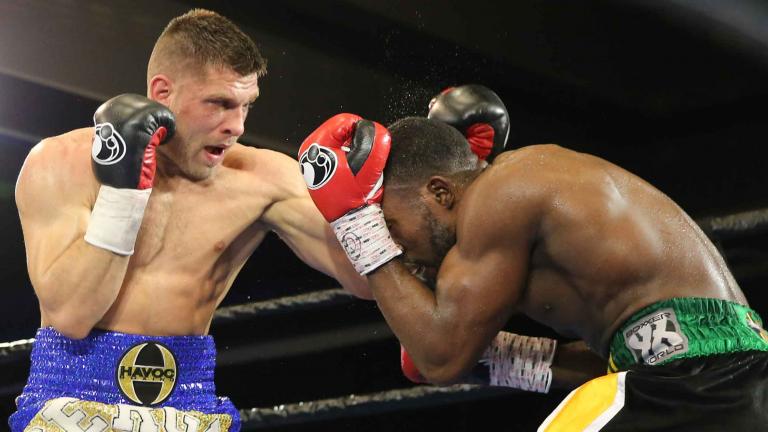 Derevyanchenko used a rapid-fire barrage of punches to gain a fifth-round TKO of Russell in the main event of a Premier Boxing Champions card in Tunica, Mississippi.

Derevyanchenko recorded his fourth straight knockout to stay on the fast track for a potential 160-pound title shot.

The Russian-born Ukrainian, who fights out of Brooklyn, New York, had to overcome a three-inch height disadvantage as well as giving away nearly six inches in reach to the 6-foot-tall Russell, who controlled a measured opening round by working effectively behind his jab.

Russell was able to dictate much of the action when boxing from outside, but Derevyanchenko began to find openings late in Round 2, such as when he pivoted around the Jamaican and landed a combination.

Both fighters had their moments in a close Round 3. Derevyanchenko was effective as he worked both the body and head of Russell, who nonetheless was able to land some nice shots of his own, including a left hook to the head right before the end of the round.

In the fourth, however, Derevyanchenko’s power began to assert itself as the pace of the action increased. After the fighters took turns trading in spurts, the 2008 Olympian smothered Russell with punches and landed a solid right to the head that snapped the Jamaican’s head back and sent him against the ropes.

Once Derevyanchenko got rolling in Round 5, Russell might as well have been trying to hold back a tsunami.

After “The Technician” landed a right hand that stunned Russell, he seized the moment and immediately began to pummel his opponent with both hands. Russell, with his back to the ropes, tried to hold off the assault until referee Bill Clancy stopped the bout at the 1:06 mark.

While Derevyanchenko landed the bigger punches, the competitiveness of the first four rounds was reflected in the judges’ scorecards. Two judges had Derevyanchenko ahead 39-37 at the time of the stoppage, while the third scored the bout even.

It took Sergiy Derevyanchenko a few rounds to work his way inside against Kemahl Russell, but he was far too much to handle once he got there.

Derevyanchenko hopes preparation with Jacobs pays off against Russell

After competing in more than 400 bouts as an amateur, Sergiy Derevyanchenko has needed less than 10 as a professional to establish himself as a title contender at 160 pounds.